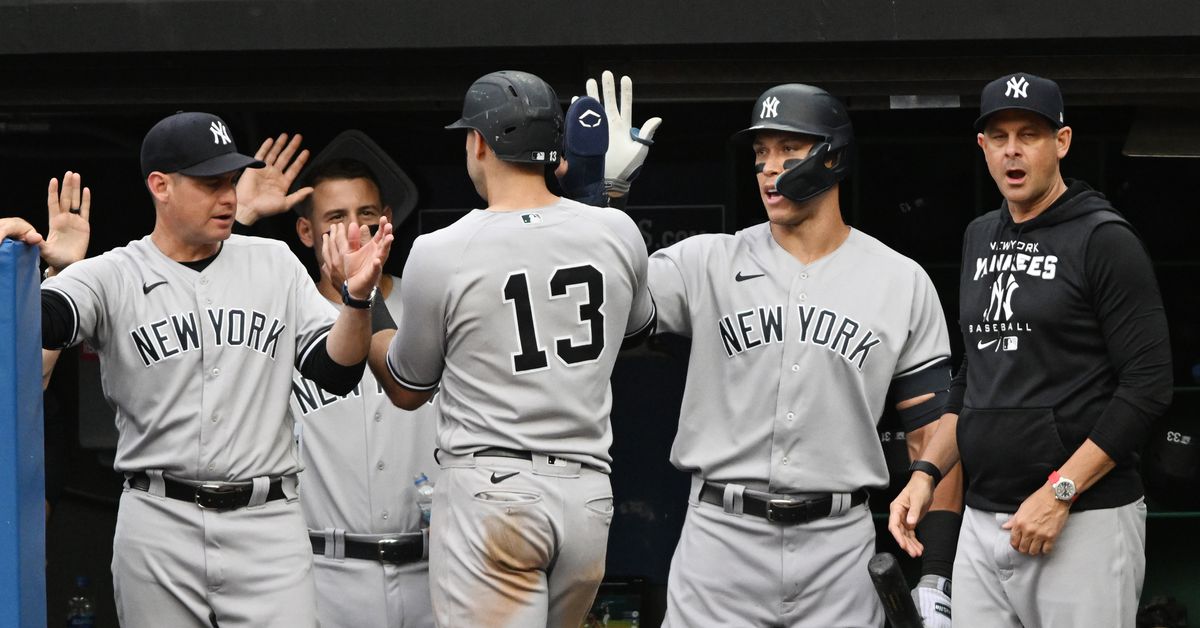 A lot is made of sweeping a doubleheader, which is funny because it happens about 50 percent of the time, but you will certainly take it. The Yankees only managed half the runs of the matinee, but the pitching stepped up to take the back half of the double dip, and the club won yet another series, beating the Guardians 6-1.

I was a little worried that Nestor Cortes would be the main character of today’s game, in a bad way. He gave up a home run in the first inning to the second batter he faced (Amed Rosario), and as I noted in the game thread, his sudden vulnerability to the long ball is probably the single biggest driver of this four-start slump he’s found himself in.

Teams have seemingly been able to time up Cortes’ cutter, but the home run he allowed was just the second of the season on his four-seamer. In wake of such an easy win in the afternoon, I was a tad concerned that the Guardians would be all over both of Nestor’s fastballs, and it might be a long night.

Instead, that one bad pitch to Rosario was pretty much the only mistake Cortes made all day — pretty much literally. Cortes sat down the next 13 hitters after giving up the home run before Franmil Reyes reached on a weak single. He didn’t throw a pitch from the stretch until two outs in the fifth inning, struck out José Ramírez — he of the AL MVP chatter — three times, and pitched six strong innings of one-run ball, lowering his ERA to 2.44 on the season. Goodness.

The Yankees couldn’t quite manage the offensive output of the doubleheader opener. Although they did manage some traffic in the opening frames, two DPs kept the bases clean for the most part. Fortunately, when you can’t get multiple hits all in a row, home runs tend to be a big help.

To wit, Anthony Rizzo and Giancarlo Stanton went deep in the fourth inning to give the Yankees the lead:

The lineup would stay quiet until Rizzo came around again, as he and Stanton notched a pair of singles to open the seventh. Josh Donaldson hits a ball hard for the first time in two weeks, bouncing a double off the bottom of the left field wall to bring in Rizzo. Following a baserunning snafu — Donaldson breaking for third on a groundball to short, giving Stanton nowhere to go — JD made up for it by scampering home on a missed pickoff throw to first, and it was 4-1.

Isiah Kiner-Falefa’s RBI single and Kyle Higashioka’s sac fly added a pair of runs, as four Yankees crossed the plate in the seventh and really looked to put the game on ice. Despite a tough bottom of the seventh from Michael King, he rebounded nicely in the eighth, racking up a pair of Ks to hold down the Guardians. After a shaky start to the ninth by Wandy Peralta, Clay Holmes entered for the final out, securing the easiest save of his life.

The Guardians are a team that could very well find themselves in a playoff spot come October — FanGraphs gives them about a one-third chance to do so, one-fifth to win the division — and the Yankees have handled them, if not with ease , than without too much stress. It’s a credit to how good this team is that when they lose, it’s a 2-1 loss like what happened in Houston, and when they win, they outscore their opponents by 14 runs over two games.

The Yankees can finish up the sweep tomorrow, with Jordan Montgomery going up against one of my favorite pitchers to watch, Triston McKenzie, with first pitch coming at 1:40pm Eastern.