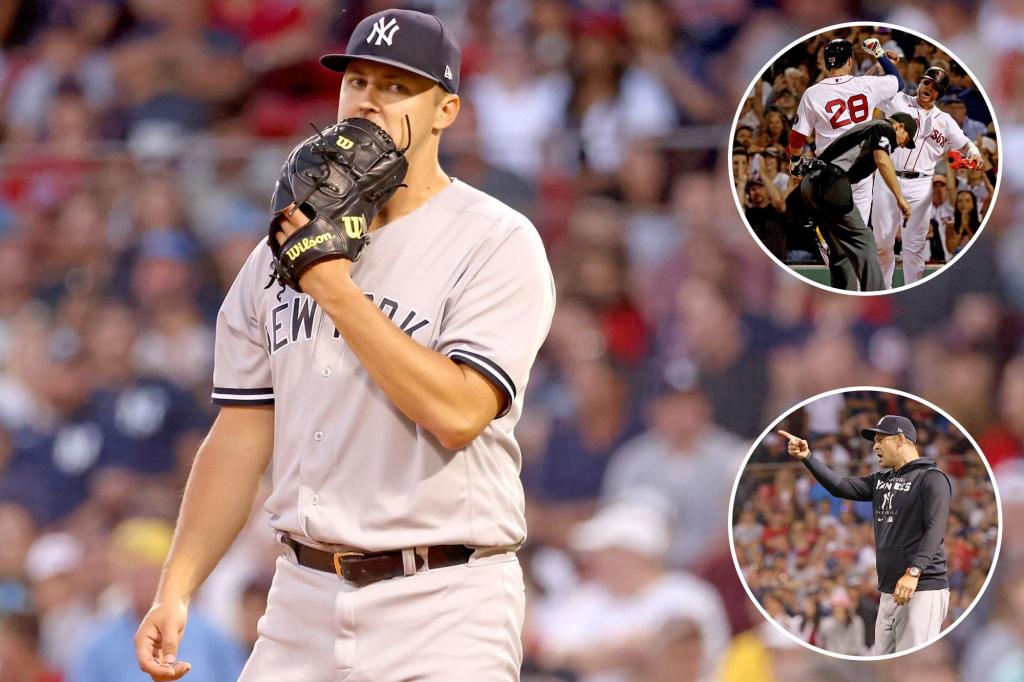 BOSTON — The best team in baseball sure looked ordinary the last two nights at Fenway Park.

There was sloppy fielding, poor pitching and plenty of other mistakes as the Yankees saw the Red Sox beat them in comeback fashion on consecutive nights, finishing with a series split after an 11-6 loss on Sunday night.

After watching his team blow a big early lead, he was hard to blame Aaron Boone for getting tossed, as the manager was ejected by home-plate umpire Tripp Gibson after Giancarlo Stanton was caught looking to end the top of the seventh.

But the Yankees’ issues ran deeper than questionable calls, as Jameson Taillon was bad again, they gave up a season-high 11 runs and their defense was abysmal.

All of it allowed Boston to come from behind to beat the Yankees on consecutive nights in front of sellout crowds, as the Red Sox scored nine unanswered runs Sunday.

It ended the Yankees’ four-city, 10-game road trip and left them 61-25 on the season and with a 14-game lead over second-place Boston.

Staked twice to four-run leads, Taillon gave up six runs — as well as a season-high three homers — in five innings. It was his fourth straight subpar outing.

“I’m kind of taking it on the chin right now,” Taillon said. “I feel like I’m in the ‘Twilight Zone.’ I keep saying the same thing and the same types of mistakes keep happening.”

The Yankees got off to a fast start, as Aaron Judge singled and Stanton hit a two-out homer against Nick Pivetta, his 22nd of the season.

Jose Trevino and Isiah Kiner-Falefa added RBI singles in the second to make it 4-0.

But the home run ball got Taillon again.

After giving up four homers over his previous three starts, Taillon allowed a two-out, two-run shot to Franchy Cordero in the bottom of the second.

Matt Carpenter, though, hit a two-run homer in the third, giving Taillon another four-run cushion.

Christian Vazquez took him deep with two outs in the third.

Then, with two outs in the fifth, Vazquez belted a run-scoring double before JD Martinez hammered Taillon’s next pitch into the seats in right-center to bring the Red Sox all the way back.

“That was probably the biggest mistake in the biggest spot of the night,” Taillon said. “It feels pretty bad. I get spotted a nice lead by the offense and that should be pretty much a guaranteed win and I should go much deeper in the game. … It’s not a good situation to be in.”

It also continued a worrisome stretch for Taillon, who has given up 27 runs over 35 ²/₃ innings over his last seven starts for a 6.81 ERA after having a 2.30 ERA in his first 10 outings. He’s also allowed 20 earned runs in his last 21 innings.

Aroldis Chapman entered in the sixth, as the Yankees try to determine a role for the left-hander.

Trevor Story hit a high pop-up into shallow right to lead off the inning, but DJ LeMahieu, shifted toward second base, couldn’t come up with the catch and it went for a single.

Chapman struck out Bobby Dalbec before pinch-hitter Jeter Downs popped up a ball at shallow center, where LeMahieu flubbed it again. He went for a fielder’s choice, as Story scored the go-ahead run.

Miguel Castro loaded the bases in the seventh — thanks in part to a Kiner-Falefa throwing error — and gave up a three-run double to Story.

On the bright side for the Yankees is that after Monday’s off day, they’ll face last-place Cincinnati for three games — although the Reds have won four in a row — before the Red Sox visit for three games prior to the All-Star break.

“We’ll try to finish off the first half at home in good fashion,” Boone said.