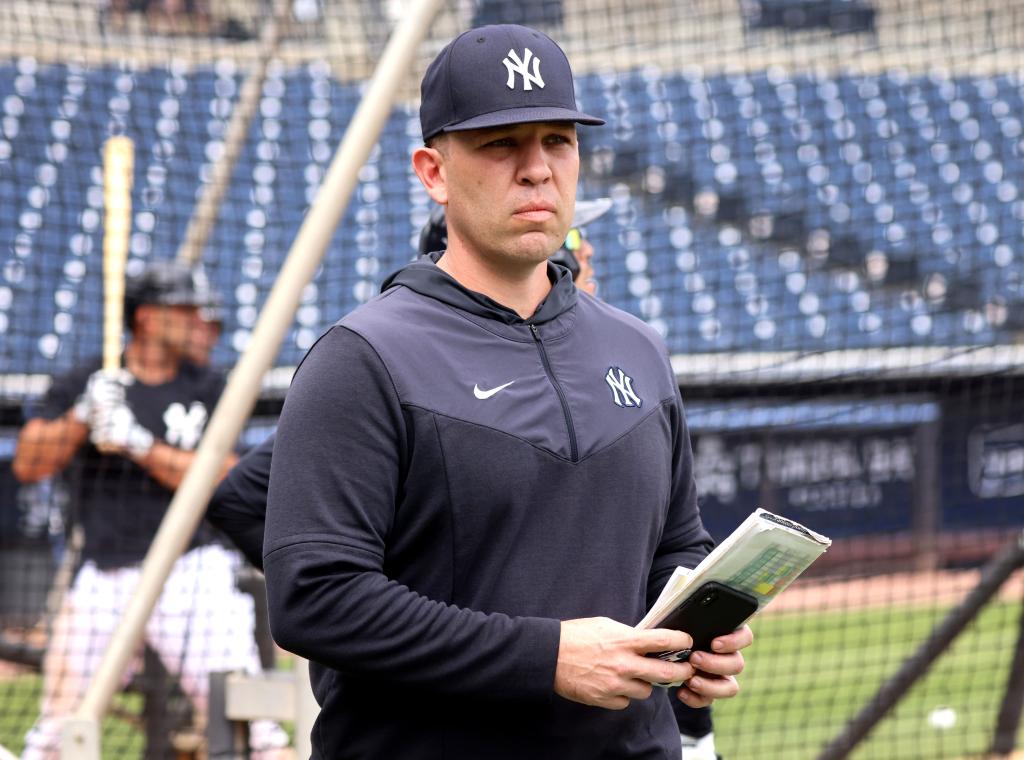 Even missing what hitting coach Dillon Lawson describes as “three of our top five hitters,” it still was jarring to see the Yankees’ lineup shut out in back-to-back games this week, and for the third and fourth time over a 10 -day span.

Lawson acknowledges there is “no doubt” that the American League leaders in runs scored have missed injured run producers Giancarlo Stanton and Matt Carpenter — and for the past few days, DJ LeMahieu — or that other slumping regulars need to pick up their absent teammates.

“I think one of our biggest strengths the entire season has been the depth of the lineup. So right now one of our biggest strengths is no longer there,” Lawson said before the team-wide hitting woes continued with a 3-1 loss Tuesday to the Rays at the Stadium. “The thing right now even when we’ve got some guys missing from the lineup, we also have some guys that are in the lineup that have performed all year that are going through their first real slumps since maybe April.

“So when you get all of that put together, we just have to continue to put our head down and push forward.”

Aaron Hicks has been an obvious culprit for much of the season. He was held out of Tuesday’s lineup — with MVP front-runner Aaron Judge back in center field — after a hitless game Monday night, including grounding into a 1-2-3 double play with the bases loaded in the fourth inning of a 4- 0 losses to Tampa Bay.

Still, Donaldson (1-for-4 Tuesday) is mired in a 3-for-25 slide with no extra-base hits or RBIs and 11 strikeouts since his four-hit game Aug. 8 in Seattle. Torres has three hits in the past two games since halting an 0-for-22 skid Monday night. Andrew Benintendi singled and tripled in three trips Tuesday, but he is batting .211 with a .657 OPS in 18 games following a July 27 trade from the Royals.

Judge, the MLB leader in home runs, can’t be expected to do it all for a lineup that has averaged 2.75 runs over its past 12 games — after putting up 5.4 per game over its first 105 contests.

“Even when things were going right, we were always questioning the process. We were still making changes to what we would do,” Lawson said. “We were still coaching, even when things were going well. Even with Judge, with Stanton, with [Anthony] Rizzo, with DJ, still coaching them through great seasons, knowing that if it’s not right when we’re going good, it’s probably not right when we’re going bad.”

That mindset, Lawson added, “turns into panic or second-guessing,” so he and manager Aaron Boone have constantly preached that the Yankees can’t “rest on the fact that we were winning games.”

“Is it good baseball? Is it a good process? For us now, that gives us comfort going through this, knowing that the process is good,” Lawson said. “It allowed us to play at a high level before. It’s constantly adjusting, not to say that we’re blind to any new changes. There’s always a healthy sense of insecurity or paranoia, of ‘are we good enough?’

“We have to continue to get better. Continue pecking away and take steps forward, even though we believe we have the best offense in baseball.”