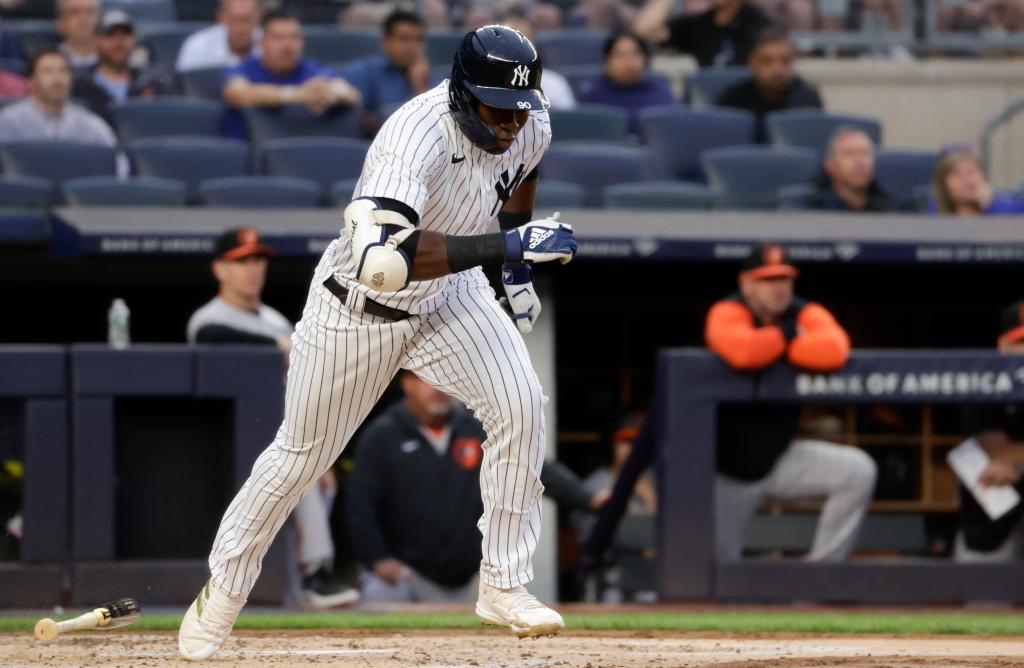 Late Monday night, after the Yankees had lost for the 10th time in their last 12 games, Gerrit Cole said his team was in need of a spark.

Considering the game that Aaron Hicks had just endured, calling up Estevan Florial seemed like a possible solution to fill a glaring need in center field and deliver that boost.

That call did not come on Tuesday, but it might on Wednesday. Manager Aaron Boone declined to confirm an NJ.com report that Florial was expected to be promoted to the Yankees on Wednesday, but indicated that it could be in the works.

“We haven’t decided anything for certain yet,” Boone said after the Yankees fell to the Rays 3-1 on Tuesday night. “We’ll talk through some things. There could be some things we decided to do, but nothing’s final yet.”

Florial was still playing for Triple-A Scranton/Wilkes-Barre in St. Paul, Minn. on Tuesday night, going 2-for-4 with a double, a walk and two RBIs. In 88 games this year with SWB entering Tuesday, Florial was batting .284 with 14 home runs, 32 stolen bases and a .852 OPS. He had struck out 122 times in 349 at-bats, a rate that was down slightly from years past but still high.

“He’s a special talent,” Aaron Judge said. “If that’s true that he’s coming up … he’ll definitely help us out.”

When asked about a potential Florial call-up before Tuesday’s game, Boone said he was “in that conversation.”

“Yeah, we’ve talked about him a lot and we’ll continue to talk as we move forward about different things that we can inject that make some sense,” Boone said before the game. “He’s put together a really good year down there. He’s certainly earned putting himself in that mix. So we’ll see.”

In the meantime, Hicks was on the bench Tuesday with Judge shifting over to center field for the first time since July 31 and utilityman Marwin Gonzalez getting a rare start in right field. The Yankees had wanted to limit Judge’s time in center field over the final two months of the season, in order to preserve his legs for more important games, but Hicks’ struggles forced at least a one-off on Tuesday.

Hicks has had a difficult season, coming back from wrist surgery that cost him most of last year, but it hit a new low on Monday. He made a defensive blunder in center field that led to a run and then went 0-for-3 at the plate and left five men on base, calling his performance “extremely embarrassing.” He fell to 5-for-53 (.094) over his last 16 games.

“I definitely sensed his disappointment and sadness [Monday],” Boone said. “He’s wearing that. The uniform’s heavy for him right now.”

The Yankees traded for center fielder Harrison Bader at the trade deadline, but the Gold Glover is still weeks, if not at least a month, away from being an option. He is still rehabbing from plantar fasciitis and occasionally wearing a boot, though he insisted on Tuesday that he has “no doubt” he will play again this year.

That doesn’t help the Yankees in the short term, though, which is where Florial could be of use.

Florial has never gotten much of an extended look with the Yankees. Including his debut in 2020, he has been called up 12 times for a total of 16 games. The longest shot he got was a seven-game stint last July in which he hit 5-for-17 with a .984 OPS, five walks and five strikeouts before being sent back to Triple-A when the Yankees traded for Joey Gallo.

“I think it’s really finding that consistency at the highest levels,” Boone said. “I feel like even in his short stints with us over the years … he’s represented well. You see it. This year, he’s mostly been healthy and put that season together at a higher level in the minor leagues. Hopefully that’s something that is a sign of him getting ready to knock in and break through.”