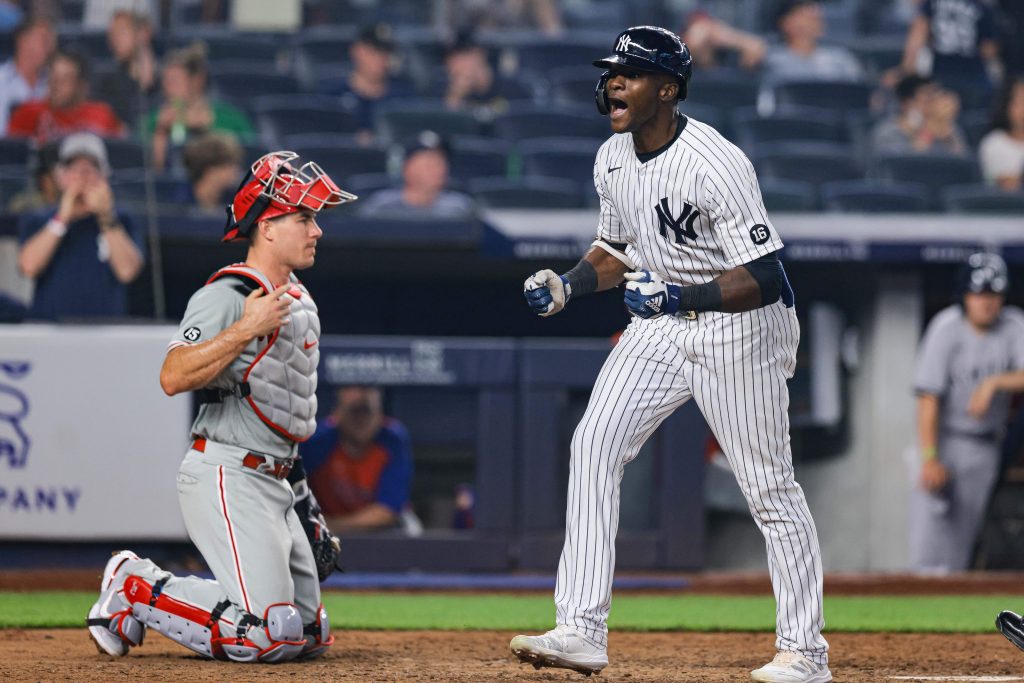 The Yankees are set to call up outfielder Estevan Floralas first reported by Bob Klapisch of the Newark Star-Ledger (Twitter link). New York will also promote infielder Oswaldo Cabrera for his Major League debut, Daniel Alvarez Montes of El Extra Base reports. Both players are already on the 40-man roster. The Yankees have yet to formally announce the pair of promotions or the corresponding moves that will accompany them, although Cabrera has confirmed his first call to the Show on his Instagram.

This is the second call to the Majors this year for the 24-year-old Florial and the third season in which he’s received some big league action. Despite already receiving several MLB opportunities, however, Florial has appeared in just 16 Major League games and taken 40 plate appearances as a member of the big league club, hitting just .206/.325/.353 in that time.

That lack of production, of course, have come with sparse playing time. Florial has never gotten a true look and regular playing time at the big league level, despite ranking among the game’s top 50 or so prospects from 2018-19. His stock has dimmed since that time — due in no small part to a tepid .218/.315/.404 slash in Triple-A last season. However, Florial is enjoying a vastly better run in his second Triple-A stint this year, batting .286/.368/.490 with 14 home runs, 26 doubles, a pair of triples and a hefty 32 stolen bases.

Florial’s huge 30.8% strikeout rate in Triple-A isn’t an improvement over last year’s 30.9% mark, so the lack of bat-to-ball skills are a clear concern (and another reason he’s perhaps not as highly touted as a few years ago). Nevertheless, with the Yankees stumbling through a dismal 3-12 stretch over the past couple weeks that includes just nine total runs over their past seven games, they’ll look to augment the lineup and get some fresh faces into the mix in hopes of turning things around.

In addition to Florial, the Yankees will give the 23-year-old Cabrera his first call to the Majors. A switch-hitter who’s seen time at second base, shortstop, third base and in the outfield corners this year (albeit just one game in left and one in right), Cabrera will give skipper Aaron Boone plenty of versatility. He’s batting .262/.340/.492 through 208 Triple-A plate appearances with eight homers, a dozen doubles, three triples and ten steals to go along with a 9.4% walk rate and 26.6% strikeout rate.

While neither Florial nor Cabrera is necessarily among the sport’s overall top-ranked prospects, they’re both well-regarded within the Yankees’ system. Baseball America ranks Florial as the team’s No. 10 prospect and Cabrera at No. 12, while MLB.com places them back-to-back at Nos. 14 (Cabrera) and 15 (Floral).