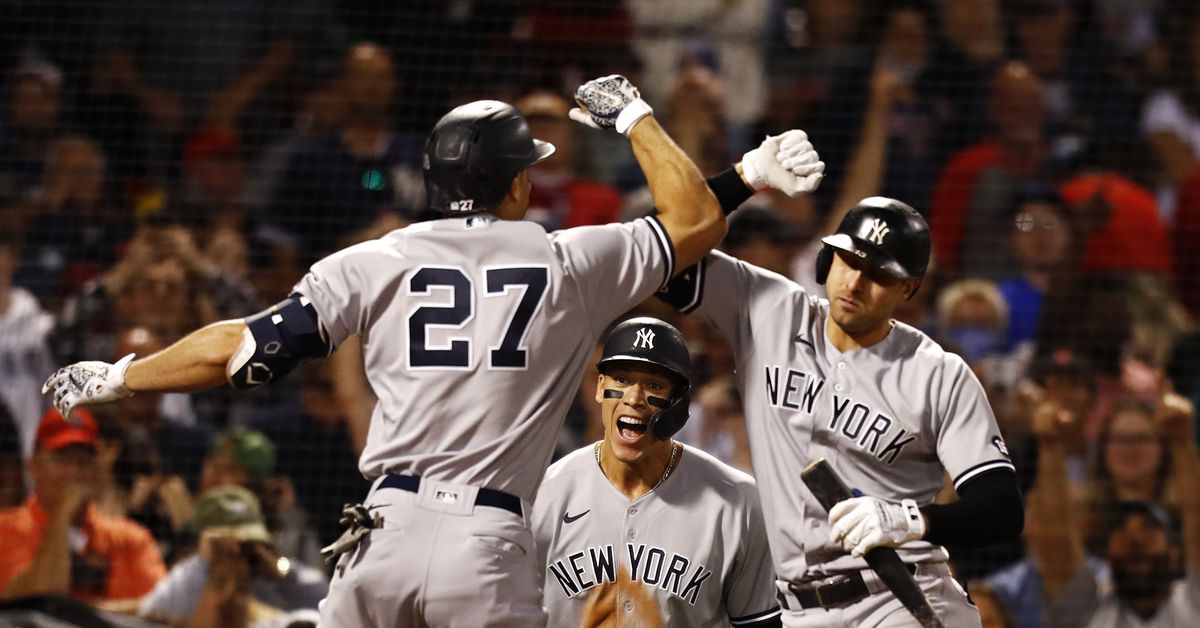 There must be something about these warm Chicago nights because the Yankees’ offense looks locked in at the plate. This one was another slugfest as the Bombers hung a ten-spot on the White Sox. Along with solid pitching from Gerrit Cole and Michael King, New York cruised to a 10-4 victory.

The Yankees wasted no time giving their ace a lead to work with. Aaron Judge drew a one-out walk, allowing Giancarlo Stanton to nuke a 2-0 hanging slider 427 feet to dead center. The home run continues his ballistic streak — since the last Baltimore series, Stanton is batting .358/.410/.755 with 7 homers, 20 RBI, and a 235 wRC+ entering play Friday.

That jolt also pushed Giancarlo into a double-digit home run total alongside Judge, allowing the pair to join some pretty lofty company.

It was anything but smooth sailing in the bottom of the first for Cole — though not of his own doing. Tim Anderson led off with a double on a ball to right that Judge will tell you he should have caught. Cole looked like he got the inning-ending double play, but Isiah Kiner-Falefa booted the ball and everyone was safe — his third error in his last two starts.

With the bases loaded and one out, Cole struck out Gavin Sheets. Jose Trevino snap-threw to third, causing Josh Donaldson to stumble over Anderson as he tried to apply the tag. Anderson took offense to the inadvertent contact and shoved JD, causing the benches and bullpens to loiter onto the field. It was much ado about nothing — just a little argy-bargy of two ultra-competitive guys.

Cole didn’t let any of the nonsense distract him and ended up striking out three in the inning to maintain the Yankees’ 2-0 lead.

The offense created an even bigger cushion for Cole in the second inning against Vince Velasquez. IKF got it started with a one-out single and went first-to-third on a hit-and-run Trevino single. Aaron Hicks doubled him home to make it 3-0, snapping an 0-for-19 slide.

DJ LeMahieu grounded out to plate Trevino, and after a Judge walk, Donaldson ripped a double over AJ Pollock’s glove in left to make it 5-0, Yankees. JD is really starting to heat up at the plate — .269/.415/.462 with a 170 wRC+ since April 21st — making consistent hard contact.

After the eventful first, Cole got just what he needed with a pair of economical one-two-three innings in the second and third, needing only 20 pitches to do so.

Judge extended the Yankees lead to 6-0 with a two-out oppo solo shot in the fourth and lengthened his lead atop the MLB home run leaderboard with his 12th of the year.

Judge currently sits one homer ahead of Houston’s Yordan Alvarez and two up on Stanton and the Twins’ Byron Buxton.

The bottom of the inning provided a bit more stress for Cole. He allowed Luis Robert and Sheets to reach with no-out singles, the latter of which appeared to be overturned at first by replay but the call stood. However, he locked it down not giving up another hit, but did allow the White Sox’s first run to score on one of the more obvious balks you’re likely to see.

Not wanting to be excluded from the party, even Joey Gallo got in on the act, muscling a 2-2 fastball over the wall in right for his fourth of the year to make it 7-1, New York. That the ball got out was pretty impressive considering Gallo got jammed and topspun the ball.

Just when it looked like Cole might cruise to a deep outing, bad defense struck again in the sixth. Kiner-Falefa’s nightmare week at shortstop continued as he booted another routine grounder allowing Robert to reach, with the home scorer curiously awarding a hit. On the very next pitch, Sheets crushed a home run to right to cut the deficit to 7-3 and mar what could have been a near-flawless line for Cole.

The ace was given one more batter in the seventh before being pulled for Michael King. The three earned runs belie just how well Cole pitched tonight. For the most part, he commanded all five pitches to all quadrants of the zone. The life on the four-seamer and the tilt on the slider were electric. All in all, it was another quality start for the Yankees ace. His final line: 97 pitches over 6.1 innings, six hits, three runs, one walk, and nine strikeouts.

Just when it looked like this game would wind down to an uneventful finish, the Yankees burst out for one more barrage in the ninth. Judge reached on a one-out single, allowing Donaldson to provide the piece de resistance, a towering two-run bomb to right.

The Bombers weren’t done, loading the bases on three straight singles from Stanton, Gallo, and Torres, allowing IKF to drive in the team’s 10th run via a sac fly. This is already the Yankees’ sixth 10-run game in the last 17 contests. They had six such games all of last season.

The White Sox pushed a consolation run across in the bottom of the ninth to make it 10-4, but King held on to get the final eight outs of the game. Home runs are fun. Double-digit scoring efforts are fun. If I were the Yankees, I would simply do this every night.

Join us tomorrow in the game thread as the Yankees look to guarantee at least a series victory. First pitch is scheduled for 7:10 PM EDT with a battle of the lefties—Jordan Montgomery vs. Dallas Keuchel.