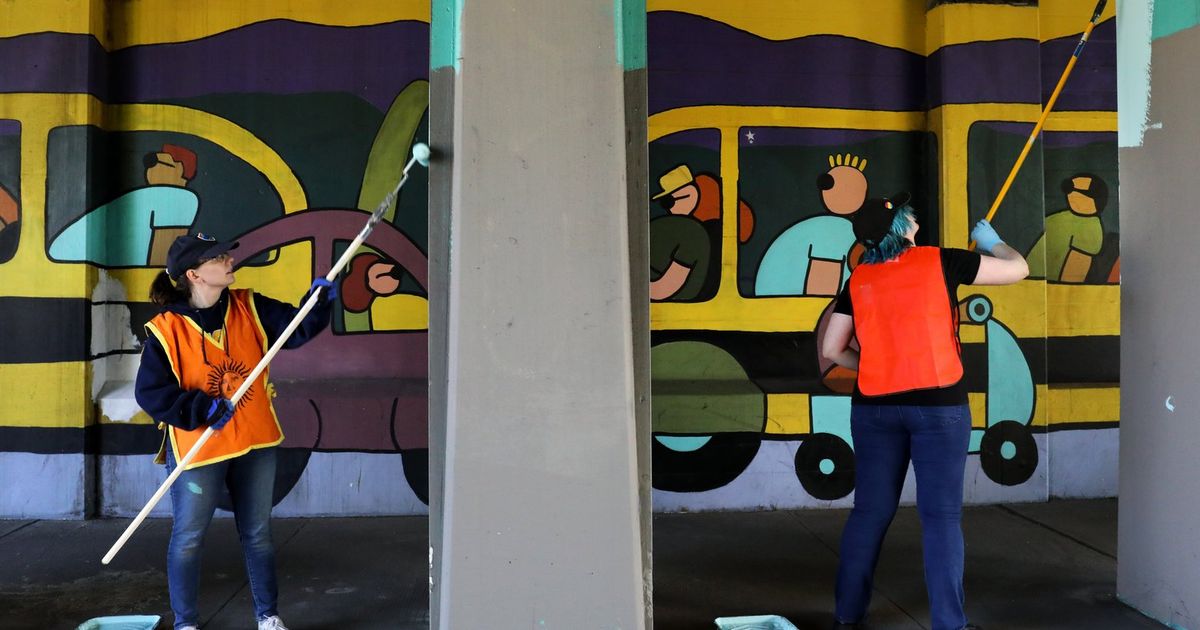 In recent years it’s been tough times for the Seattle psyche. So it’s understandable why on Saturday some 4,000 volunteers were ready for a little feel-good.

They had signed up for Mayor Bruce Harrell’s One Seattle Day of Service, which meant sprucing up the city, from picking up litter to painting over graffiti and pulling up weeds from street medians.

That’s what Seahawks coach Pete Carroll and his wife, Glena Carroll, were doing in the morning along First Avenue in Pioneer Square. Pulling up weeds.

Earlier, speaking to over 200 volunteers who had gathered at Occidental Park to kick off the day, the coach told them, “This is a great community, there’s no doubt.”

Carroll was making an apparent reference to the bad rap Seattle has gotten — Fox News in 2020 labeled the city “Crazy Town”; KOMO’s “Seattle Is Dying” 2019 documentary has gotten over 12 million views.

He said, “When we hear the national news talk about Seattle, they don’t understand, they don’t know.”

The cleanups were spaced across 127 sites.

At Occidental Park, Marc Taylor was among the crew filling plastic garbage bags.

“A lot of cigarette butts, alcohol containers, those things people wear around their wrists when going to a nightclub, one needle,” he said.

Taylor is director of finance at Chief Seattle Club, a human-services agency in Pioneer Square.

“I’m very proud to be a Seattleite,” he said. “It’s gotten better with a new mayor.”

For the volunteers at Occidental Park, there were “One Seattle” T-shirts, work gloves, orange safety vests, sun hats. They posed for a panoramic group photo before starting out.

Besides the feel-good part, the volunteers also could apply for up to three hours of community service, worth $50 toward a parking, camera or noncriminal traffic ticket.

The event was a concerted effort by some 150 groups, including big players such as the Mariners, Sounders, Kraken, Storm and UW football as well as Starbucks and Amazon and numerous small enterprises. Harrell’s office said that material costs to the city for the event came to about $80,000.

In the park, scattered around, were a dozen people, some mildly curious about the goings-on, some ignoring it all.

Among them was Nickolas Brandon, who said he had been homeless off and on for 20 years, and usually sleeps outdoors. “Cleaning up here? That’s good,” he said. Brandon’s main concern was when a food kitchen across the park would start serving.

It was an enthusiastic group, in some cases guided by city crews.

Gary Hren, a landscape supervisor with the city’s transportation department, worked ahead of volunteers pulling weeds on a median strip.

He was pulling up wild chervil, which kind of resembles carrot or parsley plants, but is classified as noxious, causing skin rashes. Hren didn’t want the volunteers handling that.

He said he appreciated the volunteers.

City crews have to cover 130 acres of landscape, he said, and his department has only 14 people.

Among those pulling up weeds was Tracie Reid, property accountant for Steinhauer Properties, whose Seattle holdings include the Embassy Suites and Stadium Innovation Center.

She grew up in Federal Way and now lives in Edmonds. She frequents Seattle, she said. Friday night, Reid was with her daughter at the Wings Over Washington “flying theater” and the Wing Dome eatery on the waterfront.

“Homelessness, and the pandemic,” she said about the last couple of years.

Now, she said about Seattle, “It seems to be moving in the right direction.”

It seems to always feel like that in this town, when the sun finally comes out.