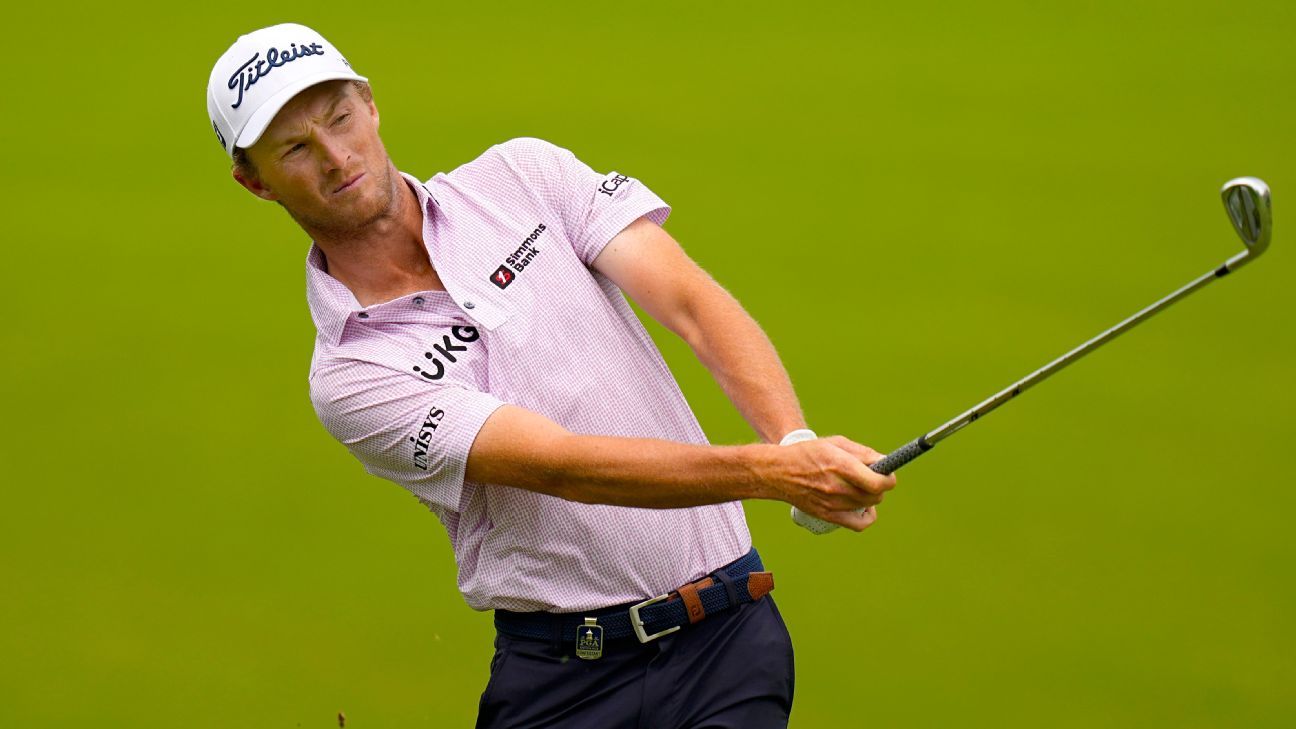 TULSA, Okla. — The Oklahoma wind came sweeping through Southern Hills and then swiftly left town in time for Will Zalatoris, Bubba Watson and yes, even Tiger Woods, to bring a sleepy PGA Championship to life on Friday.

Zalatoris hit the ball on the button whether he was in the fairway or the rough, running off three straight birdies in gentler afternoon conditions for a 5-under 65 and a one-shot lead over Mito Pereira of Chile.

Pereira missed a 7-foot putt on his final hole and had to settle for 64.

About an hour later, Watson missed a birdie putt from just inside 25 feet on the 18th hole and still delivered the 18th round of 63 in PGA Championship history.

Woods wasn’t that spectacular, but he made a pair of 15-foot par putts and two birdies on his battered right leg for a 69 to make the cut in his second straight major.

He’s still 12 shots behind the 25-year-old Zalatoris, a premier ball striker, who was quick to acknowledge that timing was everything.

“We lucked out with the draw, for sure,” he said. “I played the last eight holes with not much wind. But take it when you can get it.”

His side of the draw faced the least of the wind on Thursday morning and Friday afternoon, and it showed. Of the 22 players under par going into the weekend, only five had to endure the worst of Oklahoma’s notorious wind.

Justin Thomas concentrated on every shot, even short putts, in tastes that topped 30 mph in the morning and he was rightly proud of another 67 that put him atop the leaderboard. And then he could only watch from the couch of his rental home as the trees stopped swaying, the flags stopped whipping and birdies kept dropping.

Now it’s 36 more holes of more wild weather — temperatures in the low 60s for Saturday with a strong chance of some rain — and an even playing field.

Zalatoris was at 9-under 131, the lowest 36-hole score in eight majors at Southern Hills, and will be in the final group with Pereira. Neither has won on the PGA Tour.

Thomas was at 6-under 134, with Watson another shot behind.

Rory McIlroy was on the good side of the draw and failed to take advantage. He didn’t make a birdie until the 13th hole. That was his only one in a round of 71, though three par saves at the end kept him within five of the lead.

Jordan Spieth, playing alongside McIlroy and Woods, finally got back to even par for the tournament until driving into the water on the 18th for a bogey and a 69. He was 10 shots behind in his bid to get the major keeping him from the career Grand Slam.

Zalatoris has some history at Southern Hills, winning the Trans-Mississippi Amateur in 2014 when the final two rounds were washed out by rain. His game works well here, and it showed.

He opened with a shot from the rough that tumbled across the length of the green to 2 feet. He hit another through a gap in the trees at 7 feet. Not only did he have a bogey-free card, all five of his birdies were inside 8 feet.

Zalatoris has plenty of experience in the majors. He was runner-up in the Masters to Hideki Matsuyama in his debut in 2021. This is his eighth major, and he already has four top 10s.

“They’re tough golf courses that allows my ball-striking to really give me the best chances,” he said. “Obviously, these greens aren’t easy, but hitting them on the right tiers and being able to have the 15- to 25-footers where I’m not going up and down slopes is huge.”

The weekend will not include Masters champion Scottie Scheffler, who stumbled badly down the stretch and finished with a double bogey for a 75 to miss the cut — 4-over par — by two.

Jon Rahm thought he might have worked his way back into the mix with a 69 to get to 2-over 142, and he was skeptical about the forecast of wind abating.

“They said the wind was going to go down this afternoon. No, it’s not. It’s Oklahoma,” Rahm said. “It’s going to stay just as windy as we had.”

Watson had never scored better than 68 in his previous 49 rounds in the PGA Championship. And then he dropped nine birdies and went into the weekend with a chance. Woods in the 2007 PGA and Raymond Floyd in the 1982 PGA were the others with a 63 at Southern Hills. Both went on to win.

“Without the heat, the cloud cover made it a little bit softer. But when that wind died down, you just felt like you had a chance to score,” Watson said.