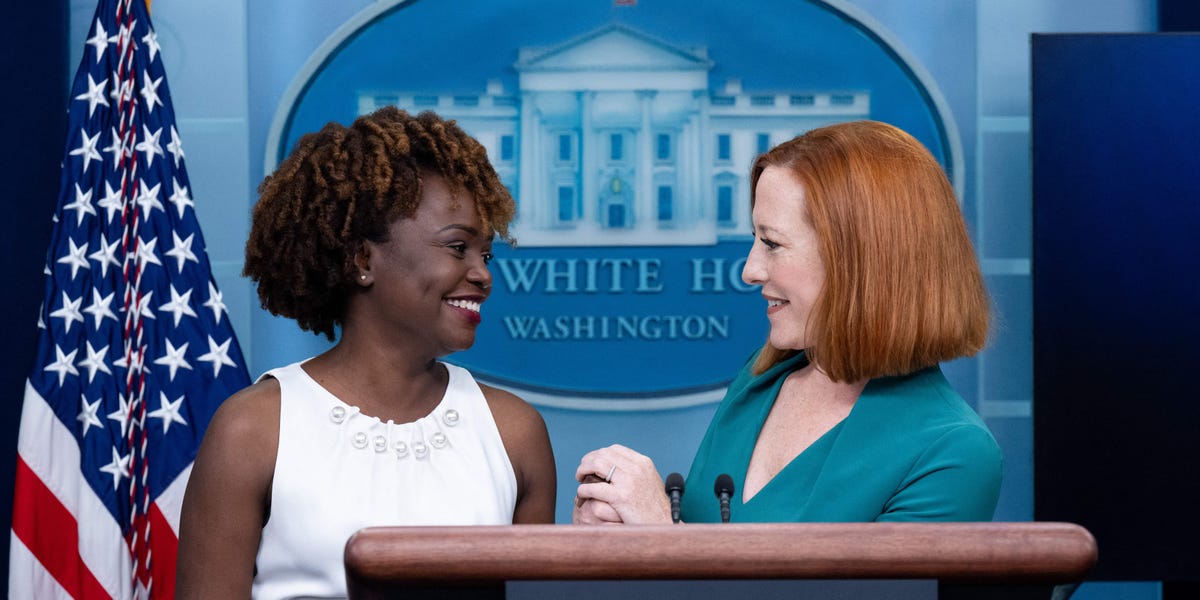 Karine Jean-Pierre will make history in coming weeks as the first-ever Black and first openly gay person to serve as White House press secretary, but she’s been making her mark in Washington, DC, for years.

President Joe Biden announced Thursday that Jean-Pierre, the current deputy White House press secretary, will take over the role after Jen Psaki steps down on May 13 to reportedly take on a job at MSNBC.

Jean-Pierre worked to form President Barack Obama and the Biden-Harris presidential campaign, and taught at Columbia University as a lecturer. Jean-Pierre was also a “top candidate” being considered for the press secretary role last year, but the job ultimately went to Psaki.

Jean-Pierre was born in 1977 on the island of Martinique to Haitian parents. She later grew up in the borough of Queens in New York City after moving there at 5 years old.

Jean-Pierre has spoken about how her parents — her father a cab driver and mother a home health aide — and her immigrant background have inspired her politics.

“Growing up in an immigrant household really defined me. It taught me to work hard,” she said of her family during an interview for MoveOn.

Jean-Pierre also said when she told her parents she was going to work for then-President Obama her parents said she was “changing the world.”

She earned her bachelor’s degree from the New York Institute for Technology in 1997 and went on to graduate from Columbia University in 2003 with a Master’s of Public Affairs.

She’s worked in politics out and proud

The 44-year-old came out as a lesbian at the age of 16 and has written about the experience on Twitter.

“I came out to my Mom when I was 16 years old,” Jean-Pierre wrote. “The revolted look on her face sent me running back into the proverbial closet and slamming the door shut. After that, my sexuality became a family secret and it would stay that way for years.”

Jean-Pierre said her mom eventually came around and is “proud” of her.

She is raising a daughter, Soleil, with her partner, Suzanne Malveaux, a CNN correspondent.

Jean-Pierre has also spoken about how her gender and sexuality affect her career in politics, which she refers to as a “boys’ club,” in her memoir “Moving Forward: A Story of Hope, Hard Work and the Promise of America. “

Jean-Pierre has been open about his criticisms of former President Donald Trump, including his implementation of a travel ban for Muslim-majority countries.

“I am everything that Donald Trump hates,” Jean-Pierre said in 2018. “I’m a black woman. I’m gay. I am a mom. Both my parents were born in Haiti, and they came here for the American dream.”

In 2018, after Trump referred to a handful of countries as “shithole countries,” Jean-Pierre called him out during a speech at the University of Michigan, saying she was tired of his “immigrant bashing” and “homophobia.”

From Obama to Harris, she’s had nearly 20 years of experience

Jean-Pierre began his career at the Center for Community and Corporate Ethics. Throughout her professional life, she has worked for the ACLU, as a political analyst for MSNBC and NBC, as chief public affairs officer for MoveOn, and as a lecturer at Columbia University.

She’s also had a career steeped in politics. She worked on a number of presidential campaigns, including Martin O’Malley, Obama, and Vice President Kamala Harris. She also worked at the White House Office of Political Affairs during the Obama administration.

As deputy press secretary for Biden, she became the first openly gay and second Black woman to ever hold a White House press briefing in May 2021.

“I think if you are passionate about what you want to be or where you want to go and you work very hard to that goal, it will happen,” Jean-Pierre said Thursday during the press briefing announcing her promotion. “And, yes, you’ll be knocked down and you’ll have some tough times. And it won’t be easy all the time, but the rewards are pretty amazing, especially if you stay true to yourself.”