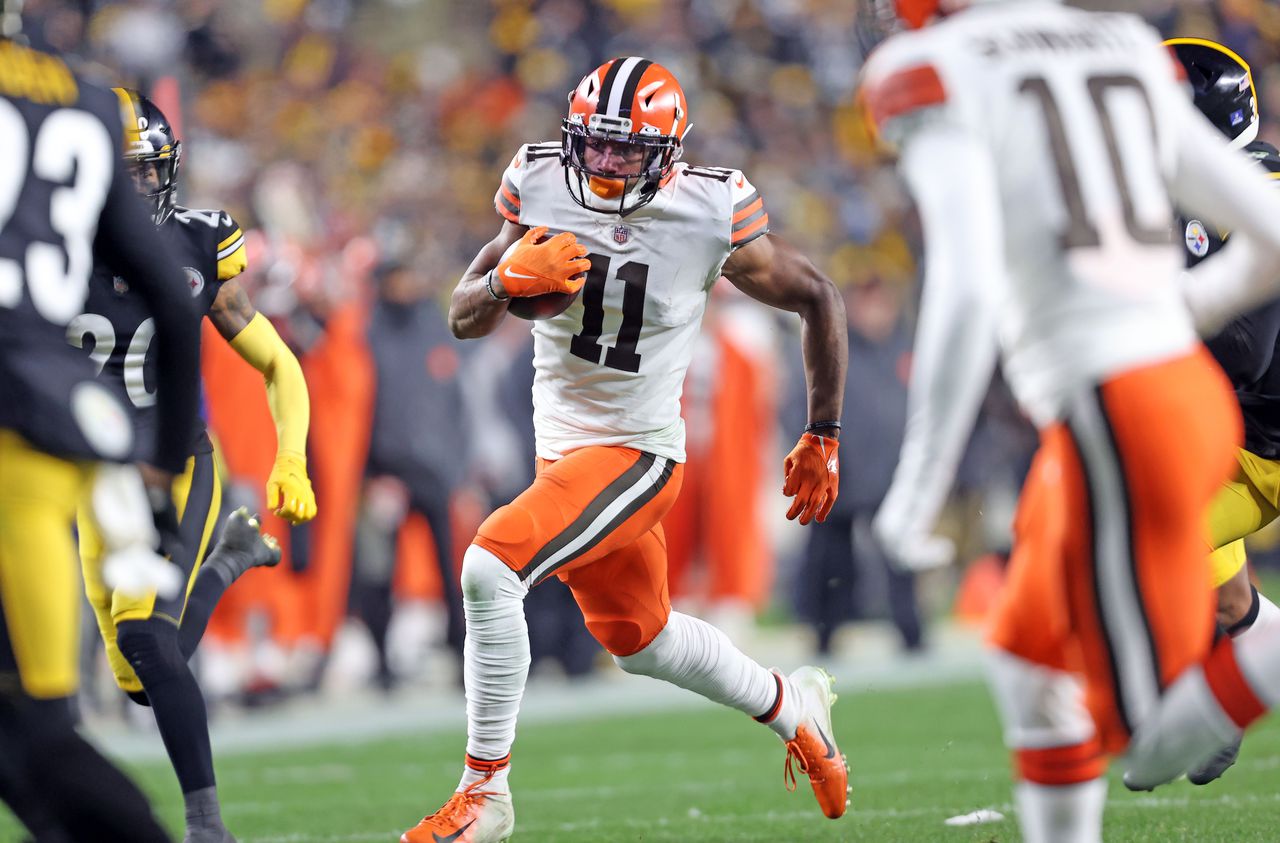 CLEVELAND, Ohio – Talking to myself about the Browns. It’s a Baker Mayfield-free zone, because it’s doubtful anything will change about the QB for a while.

Q: What is the Browns’ biggest need today?

A: It’s the same thing they needed going into the draft: a pass rusher.

Q: What about Alex Wright?

A: The Browns picked the Alabama-Birmingham product in the third round. He is a superb physical specimen. The Browns love his attitude. But he is not ready to be a full-time starting defensive end on a playoff-caliber team. He also can play some inside. Long range, love him. In 2022, I want another veteran across the D-line from Myles Garrett.

A: He’s the natural option. But when it comes to Clowney and contracts, who knows? He’s never in a rush to sign, although he was under contract in time for minicamp last season in Cleveland.

A: I heard the Browns had their eye on another veteran free-agent pass rusher. I wonder if it’s Justin Houston. He just signed what is known as an Unrestricted Free Agent Tender. It’s complicated, but it means it’s likely he will return to Baltimore.

A: There are names such as Jerry Hughes (Buffalo) and Jason Pierre-Paul (Tampa Bay) now on the market. I like the 33-year-old Hughes a bit. Assuming the Browns are right about Wright, they need a guy for a year to help out.

Q: How about a receiver?

A: The Jarvis Landry returning rumors have been hot and cold for months. My sense is that it was over for Landry when GM Andrew Berry talked during a March 1 press conference about being “grateful” to the veteran receiver. Sounded like a goodbye then.

A: Lost in the Deshaun Watson/Baker Mayfield talk is the tremendous deal for Amari Cooper. That can be a game changer. I don’t view Cooper as a star, but he’s very good. Assuming Watson can play as he did in Houston, Cooper can be terrific for the team. Bleacher Report recently rated Dallas trading Cooper to the Browns for a fifth-round pick as one of the 7 Worst Moves of the offseason.

Q: Don’t they need another receiver?

A: Let’s look at the situation right now. Cooper is No. 1. A year ago, many of us were very excited about Donovan Peoples-Jones (DPJ) making a big step forward at WR. I remain in that camp. Mayfield’s physical problems and other issues at QB ended up with no receiver being productive.

Q: What about David Bell?

A: The Browns love this guy. They believe they got a gem late in the third round in the Big Ten Receiver of the Year from Purdue. He can be a more consistent Rashard Higgins-type.

Q: Don’t they need some speed at the position?

A: The Browns have Anthony Schwartz, who is a front office favorite. Schwartz has Olympic-caliber speed. He’s a smart guy. But he has to stay healthy. I’m not as high on him compared to Peoples-Jones. They also signed Jakeem Grant, the 5-foot-7 return man who has caught 100 passes (seven for TDs) in his NFL career.

Q: What about Julio Jones?

A: There are several reasons the future Hall of Famer is still on the free-agent market. He has played only 19 of 33 games in the last two seasons. He’s 33 and been haunted by the dreaded hamstring injuries, a plague for older receivers. He caught 31 passes in 10 games for Tennessee, an average of 14 yards per catch. One was for a TD.

Q: Would you take him on a bargain contract?

A: Maybe. But you can’t bring him in expecting a lot of production. Part of me thinks the Browns would be OK with the group on the roster right now. Another name is Ja’Marcus Bradley, entering his third season. It could be time to give chances to DPJ, Bell, Schwartz and others behind Cooper. The Browns picked Oklahoma receiver Mike Woods II in the sixth round, but I believe he’s a developmental player likely headed for the practice squad.

Q: You’d do nothing at receiver?

A: Let’s assume Kareem Hunt stays reasonably healthy, as he had before 2021. The running back is an asset in the passing game. They still have Demetric Felton, another pass-catching running back. Perhaps with Watson, the Browns will receive more productivity from tight ends David Njoku and Harrison Bryant. I sense no urgency from the team to add another receiver.

Q: What else do they need?

A: I’m more concerned with the defensive line. I want a veteran at the end. I know they added Chase Winovich from New England, but he’s coming off a rather lousy season as a pass rusher.

Q: How about a defensive tackle?

A: Here are the current defensive tackles on the roster: Taven Bryan, Sheldon Day, Jordan Elliott, Glen Logan, Tommy Togiai and Perrion Winfrey. They can use another veteran at this spot, but the need is not as critical as defensive end. This could be a huge chance for someone such as Elliott or Togiai to establish himself. Winfrey had the greatest draft day press conference in decades, so he could be fun.

Q: I want to talk offense, and you keep talking defense.

A: That’s because it’s where they need to improve.

Q: What about Baker Mayfield?

A: Not going there today. This remains a Baker-Free Zone, at least for 24 hours.

What I heard about the Browns draft – Terry’s Talkin’ Browns

What about the Guardians? The amazing decision by Jose Ramirez

How a decision made by a 12-year-old Dru Joyce III changed the lives of so many.

What I heard about Baker Mayfield’s situation