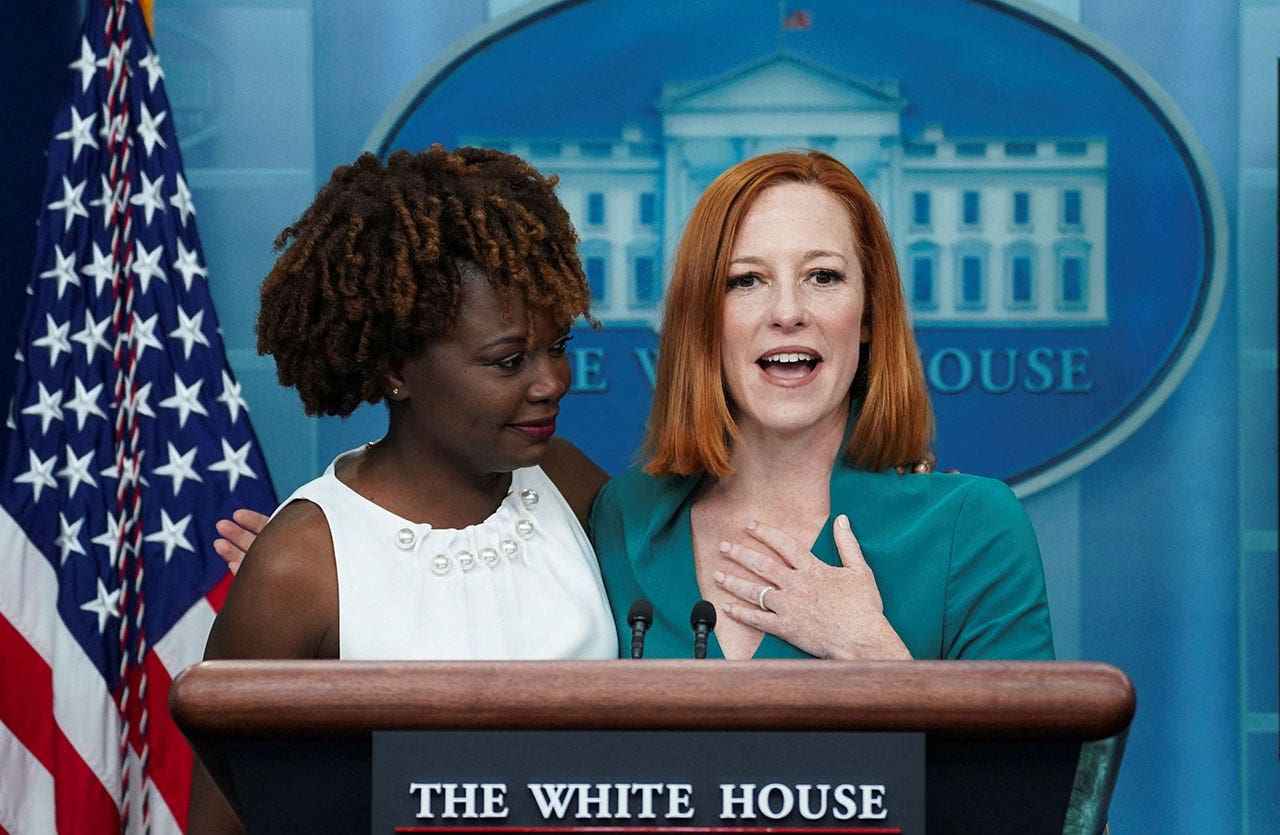 In the first question Karine Jean-Pierre took as she began her White House press secretary tenure on Monday, a reporter asked how she viewed her job.

“Do you view your primary role here as speaking for the president and promoting his interests?” Zeke Miller of the Associated Press asked. “Or are you committed to providing the unvarnished truth to the American people so that they know what their government is doing on their behalf?”

“I actually think that’s hand in hand,” she said. “I don’t think there’s – that there is any separation to that.”

The question got to the heart of what a press secretary is supposed to be and how they handle the inherent tensions of the job; on one hand, they serve at the pleasure of the president and are supposed to make the White House look good, but they also are expected to disseminate accurate information, work with reporters on their stories, and serve as a conduit between the press and the commander-in-chief.

‘THE FIVE’ ON PSAKI’S LAST DAY AS BIDEN PRESS SECRETARY

How they manage those duties that inevitably come into conflict determines how effective they are in that role. Thirty-four others have filled the public-facing job before Jean-Pierre, the first Black and openly gay individual to hold the post.

“Your salary is paid by taxpayers,” a former White House correspondent told Fox News Digital. “You are the spokesperson for the president, but you are also the chief spokesperson for the executive branch of the US government. It’s not a job that is solely spin and political. You have a responsibility to provide reliable and factual information on the activities of the US government.”

They pointed to what former Bill Clinton press secretary Mike McCurry noted about the metaphorical significance of his office being halfway between the Oval Office and the briefing room.

“You’re not simply there to spin for the president. You’re there to represent the interest of the press corps,” the former correspondent said.

“It’s a tricky business because the more partisan you are in your performances as a press secretary to protect a president’s political standing, the more you may have trouble appearing to be a neutral figure,” Hume said.

Past press secretaries have varied backgrounds and track records of success. Some, like President Obama’s longest-serving chief spokesman Jay Carney, came from journalism, while others like President Trump’s first press secretary Sean Spicer, was a career party flack. Jean-Pierre has a strongly liberal political background, which included a stint as an MSNBC analyst, and critics have pointed to her remarks about Republicans winning “stolen” elections as proof she wouldn’t be a fair broker from the podium.

“She’s got a hill to climb to establish credibility,” Hume said.

She got off to a rocky start in the view of some in the briefing room on Monday, as she stumbled over a question about inflation by calling for corporations to pay their fair share of taxes, and said she had no timeline for resolving the agonizing baby formula shortage gripping the country.

“I think that left a lot of people unimpressed in terms of the answer that she gave, as well as the answer about baby formula and not having a timeline of when that factory [would be] up and running,” one current White House reporter said.

Her predecessor Jen Psaki received high marks in some corners for calling on a variety of outlets, working well with reporters and reliably holding briefings – according to the White House Transition Project, she held 224 over about 16 months, more than the 205 combined over all four years of the Trump White House. But she had her share of tense moments and had to sell spin like blaming Vladimir Putin for inflation, passed judgment on the false “whipping of migrants” narrative at the border, and ripped into critics of the widely panned Disinformation Governance Board that the Biden administration mothballed this week.

“She’s a fantastic interlocutor… but does that mean she gave the unvarnished truth 100 percent of the time?” the White House reporter said. “No, not exactly, and no press secretary has, and they wouldn’t be in the job for very long. Psaki was quick on her feet, not afraid to mix it up, and we’ll see if Jean-Pierre is up roof.”

PSAKI was popular enough with a left-leaning press corps that a war broke out for her services from major outlets like CNN and MSNBC once she left the White House; she’s expected to join MSNBC in the coming months.

Figures like CNN’s Brian Stelter and MSNBC’s Nicolle Wallace gushed over her in interviews, and Stelter even wrote “How refreshing” on a “Reliable Sources” chyron when she first took the podium because of her stated commitment to sharing accurate information. A writer for Poynter, the parent outfit of the left-leaning fact-checking outlet PolitiFact, wrote last week Psaki was “one of the best to ever hold the title” and restored “honor, dignity and class” to the room.

To some detractors in that room, however, that praise is misplaced.

“When you heard from Jen Psaki, you did not get the feeling she was speaking for Biden,” another White House correspondent told Fox News Digital. “She was part of a team actively making as little news and answering the least amount of questions possible. Jen Psaki successfully leveraged the job into a sweet MSNBC news gig, but she did more to promote herself than promote the president.”

Some critics charge she also benefited from a press corps less willing to do combat than they were during the Trump era, when dramatic briefing exchanges between left-wing reporters like Jim Acosta and April Ryan and Trump’s spokespersons like Spicer, Sarah Sanders and Kayleigh McEnany made for good TV. One anonymous reporter even conceded to Politico last month that they were afraid of having a verbal spat with Psaki, for fear of looking like an “a–hole.”

“That’s absurd,” the other White House correspondent told Fox News Digital. “You can be tough on an administration without being an a–hole. But as a reporter, aren’t you already expected to be treated like an a–hole by people in power? We all need to get tougher on holding the Biden team accountable, especially the cable and network TV reporters who get the majority of the questions during the briefing.”

Yet there’s only so much a flack can do. PSAKI may have been appreciated in the press, but Jean-Pierre takes over as their boss and his party flounder in the polls and faces a potentially difficult midterm election cycle.

The press secretary role has taken on greater significance under Biden than Trump, as the latter was far more likely to make his own news and speak candidly to reporters than his more scripted successor. Briefings are useful to reporters to get official White House comment in front of the cameras, but a lot of the reporting they do happens behind the scenes and might not even be brought up publicly, for fear of losing a scoop.

“Biden is much more under wraps, so the spokesman becomes more important, and she was very prominent in a way that her immediate predecessor was not,” Hume said.

“We were spoiled with the last guy [Trump] because love him or hate him, he’s quotable and made news,” the first White House correspondent said. “That’s why the briefing is valuable, because you can clear out the underbrush of news and figure out more what they’re thinking, what it is they’re actually doing.”

The press secretaries also reflect the sensitivities of their presidents; Spicer, for instance, was deployed to trumpet the narrative on his first day that Trump’s inauguration was the most viewed in history, “period.” That set the tone for what would be a remarkable four years of contention between Trump spokespersons and a combative media. Spicer lasted just six months.

“Candidly the worst one that ever existed was Sean Spicer who just saw it as his job to do combat,” the former White House correspondent said.