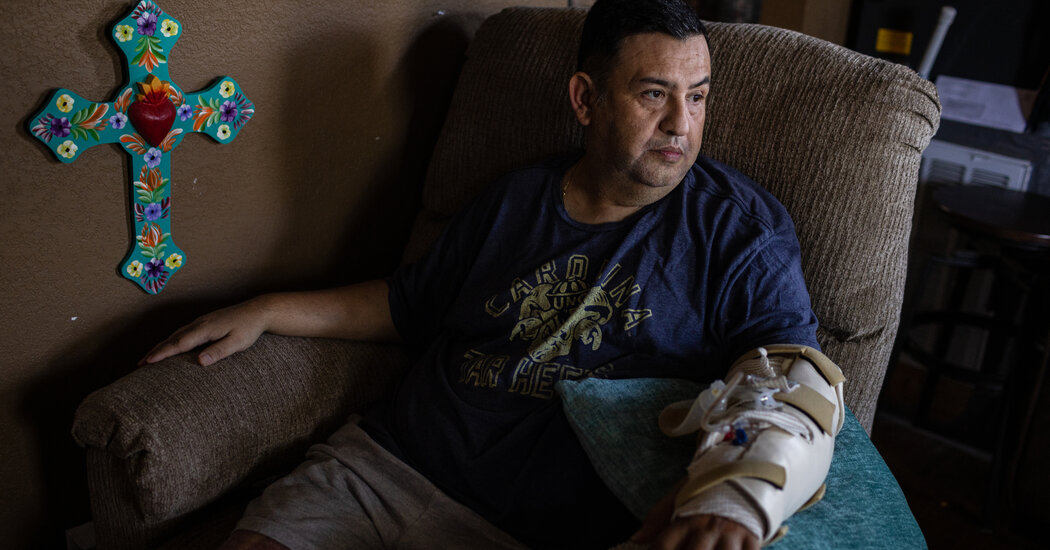 UVALDE, Texas — The first shots came from the hallway outside the classroom. Arnulfo Reyes, a fourth-grade teacher at Robb Elementary School, quickly remembered the active shooter training he had rehearsed so many times and told his 11 students to lie under their desks and “act like you are asleep.”

A black shadow appeared at one of the classroom doors and a plume of fire flared from the tip of what looked like a rifle. Mr. Reyes felt a bullet piercing his arm, tearing off a chunk of flesh and bone. Then the gunman turned on the children. The rampage was so brutal and so swift, the teacher said, that he did not hear a single whimper from them as their bodies were shredded.

Mr. Reyes lay in a pool of his own blood for what seemed like an eternity until he heard police officers gathering in the hallway just outside the classroom door. His students lay silent, dead or dying; a few other children in an adjoining classroom were still alive, faintly calling for help. The officers will burst through and save us any minute now, he told himself. But the minutes ticked by, and no rescue came.

About a half-hour later, the gunman, sitting near where Mr. Reyes was sprawled on the floor, seemed to be taunting him. He leveled his gun at the teacher’s back and fired again.

“I think about it more and more. What could they have done differently?” Mr. Reyes said in an interview recounting the events of May 24, when a mass shooting at the school left 19 students and two teachers dead.

He described the agony that victims felt as the police who were gathered in the hallway postponed entering the classrooms where the gunman was holed up — waiting some 78 minutes in a delayed response that a preliminary law enforcement investigation suggests was complicated by a search for a key and a decision to try to protect the lives of the responding officers.

“I kept waiting for someone to come,” Mr. Reyes said. “But when I didn’t see anyone coming in, I just thought, nobody’s coming.”

More than a month after the tragedy, as Mr. Reyes tries to recover from the severe wounds he suffered, the memories of that day play repeatedly in his mind. The day began with a jovial year-end award ceremony, after which nearly half of Mr. Reyes’s 18 fourth-grade students had gone home with their parents. Eleven stayed because they wanted to watch “The Addams Family” movie.

“It was supposed to be an easy day, just before the summer break,” he recalled.

Out of nowhere, Mr. Reyes and his students heard what they now know were gunshots coming from the hallway. The powerful blasts sprayed debris into his classroom. “There were pieces of wall flying,” he said.

The gunman first entered room 112, which was connected to Mr. Reyes’s classroom through another door. He shot indiscriminately, the police said, fatally wounding two teachers, Irma Garcia and Eva Mireles, and several of their students.

Mr. Reyes turned to his students. “All right, we’ve already practiced this. Get under the desks, okay? Just close your eyes and act like you are asleep,” he remembered saying.

“I didn’t want them to see anything.”

Mr. Reyes does not remember if the gunman entered through the door that connected the two rooms or if he stepped back into the hallway. But the next thing he recalls is seeing a ghostly figure wearing a black hoodie over his head and what looked like a black medical mask that obscured half of his face.

“I just see this shadow and his eyes,” he said.

Then came two sparks from a rifle, aimed at him. “He shot me first,” he said. The impact sent a burning shock through his left arm that felt like hot lava, he said. A large chunk of his forearm was missing.

The gunman quickly turned his rifle on the students, unleashing a rain of fire that was so fast and merciless that it was over almost as soon as it began and there was nothing but silence in the room. “They were probably instantly killed,” Mr. Reyes said, though he said some of them might have died during the long wait. Maybe, he said, they were silent because “they were in shock.”

The first police officers arrived outside the classroom door about three minutes after the gunman entered the school, according to a preliminary timeline. After the initial attack, Mr. Reyes said, he could hear them talking to one another in the hallway just outside.

At one point, he heard one of the officers yell at the gunman: “Come out, we want to talk to you!” The gunman did not answer, though the police have said that two officers suffered grazing wounds when he fired a burst at the classroom door. The chatter from the police went quiet. “You didn’t hear anything anymore,” Mr. Reyes said.

Most of his students were probably beyond saving, Mr. Reyes said. But at least one surviving child in the classroom next door must have heard the officers too, he said, because he heard someone cry for help.

For several minutes, the gunman paced around the room, then perched on the teacher’s desk as Mr. Reyes lay sprawled face-down on the floor below. In what he believed was an attempt to taunt him—or to make sure he was dead—the gunman let a cup of water drip from a desk onto Mr. Reyes’s back. The gunman then smeared some of Mr. Reyes’ own blood on the teacher’s face and placed the teacher’s phone, which kept ringing as desperate relatives tried to reach him, on his back.

He seemed to be trying to elicit a reaction, Mr. Reyes said. “He was going to make sure I was dead, too. I mean, he had nothing to lose.”

Some 30 minutes after entering the room, apparently unsure whether Mr. Reyes might still be alive, the gunman shot him a second time, this time in his lower back. Mr. Reyes said he became certain at that point that he would not survive. “I’m not going to make it,” he told himself. “I’m going to bleed out.”

Mr. Reyes does not remember how much more time passed, but he suddenly heard tables sliding and loud stomps in the room next door. There was more gunfire. Then silence.

A man who was part of a Border Patrol team that had breached the classroom next door and killed the gunman approached Mr. Reyes, urging him to “get up if you can.” When he could not, the agent dragged him by the tip of his pants out of the carnage. “He asked for help carrying me. I was too heavy,” he said, sharing a rare smile.

Another agent, he said, suddenly shouted an expletive. “There’s kids under here!”

A few of them were still alive in the adjoining classroom. The school was suddenly a swarm of police officers, medics, ambulances and, outside, hysterical parents. Mr. Reyes was flown to a hospital in San Antonio, where he underwent several surgeries.

Doctors placed a metal plate about six inches long on his arm for his gaping wound, covering it with a skin graft from his right leg. A pair of drainage bags still collect fluids coming from his lower back and arm. He will not regain full movement in the arm, doctors have told him.

He is back now at his modest home in Uvalde, a city where he has lived since he was a young child. It is decorated with antiques and inspirational signs. “All You Need Is Love,” one of them reads, and: “It Takes A Big Heart To Help Shape Little Minds.”

He had dreamed of becoming a lawyer, he said, but 18 years ago he found his calling as an elementary schoolteacher, the last 10 of them at Robb Elementary.

After a difficult year of teaching remotely because of the pandemic, Mr. Reyes was happy to see all of his students return to class in 2022. “This year was different, I could just feel it,” he said. “They had a tight bond. They wanted to learn.”

When he thinks about the students who died in his classroom that day, most of them barely 10 years old, he finds himself remembering them not in death, but in life.

There was Rojelio Torres, who had suddenly become serious about learning his multiplication and division. “He was very ambitious. He wanted to be good at everything.”

There was Jose Flores, who lived for lunch and recess and was a “corajudo,” meaning he would get flustered each time he failed to understand a lesson or math problem. “He would shut down and I would tell him, ‘Don’t do that.’ And he did, he learned how to control his frustration.” Josecito, as his family called him, was named to the honor roll for the first time on the day he was killed.

And who could forget Jayce Luevanos? He was the popular class clown who reminded Mr. Reyes of the flamboyant movie character Ace Ventura portrayed by Jim Carrey. Jayce liked to wear a T-shirt with the image of an ice chest that read, “I’m a little bit cooler than you.”

On a recent afternoon, Mr. Reyes sat next to a blue folkloric cross given to him by the mother of Tess Mata, one of the victims, and a block of granite engraved with photos of all the victims. A cousin, Belinda Aguilera, stopped by to check on him. “He’s doing better, thank God,” Ms. Aguilera said as she studied Mr. Reyes, who was sitting alone on a couch.

Ms. Aguilera, who lives near the school, said she was one of the people calling Mr. Reyes’s phone in a panic after hearing several gunshots. “You popped on my head because I knew you were there,” she told him, fighting back tears.

No, no, Mr. Reyes said, trying to reassure her at a time when practically everyone has lost any sense of assurance. This is not on you, he said.

She didn’t seem convinced. She talked about the long road he had ahead of him. Not just the wounds healing—but everything else. “The bread will never go away,” she said.