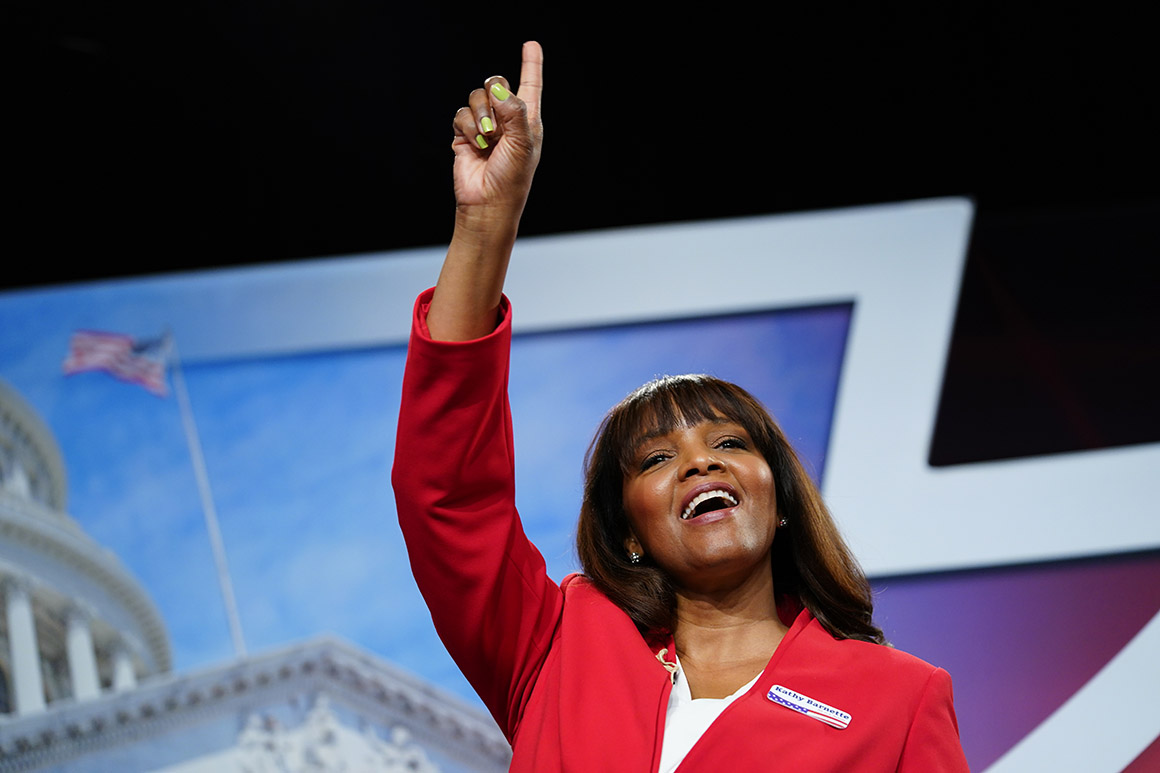 “Barnette’s apparent rise is surprising just because of the lack of notoriety or resources compared to some of the other candidates in that race,” said Brian Nutt, a Pennsylvania-based Republican strategist who is not working for a candidate in the contest.

Barnette has a purist’s zeal, a compelling life story, and the ability to tell it to Republican grassroots voters. And, according to Republican strategists and officials across the state, Barnette is likely benefiting from a smashmouth primary that features Oz and McCormick going nuclear on each other on TV. GOP voters have been inundated with attack ads slamming Oz as a “RINO” and McCormick as a stooge for China, leading some to look for a third option.

In an interview, Barnette said she has been successful because voters are looking for “authenticity” amid the TV ad wars.

“They’re spending $50 million on ads. That is their campaign,” she said of her opponents. “Unless there’s some high-falutin’ press conference or debates or events to go to, it’s overwhelmingly on television. And it’s these plastic, little run-of-the-mill political ads.”

Barnette has used forums and debates to talk about her striking biography: She has described herself as a “product of a rape,” whose mother was only 11 years old when she was conceived. As a child, she lived on a pig farm without insulation. She went on to become a veteran, adjunct professor of corporate finance, and author of “Nothing to Lose, Everything to Gain: Being Black and Conservative in America.”

“I think it’s real. I’ve had grassroots political people tell me for a while that when there’s candidate forums, she’s the one who has the most enthusiasm. And what was said about her was, ‘Boy, I really like her, but she can’t win,’” said Chris Mottola, a GOP consultant and Pennsylvania native who is not involved in the race. “With Oz and McCormick just savaging each other, they wind up with high negatives. All of a sudden, you’re like, ‘Well, why not vote for her? I do really like her.’”

GOP consultants said another factor that helps explain her bump in the polls is her link to state Sen. Doug Mastriano, the frontrunner in the state’s GOP primary for governor. Mastriano and Barnette have endorsed each other and campaigned alongside each other.

Mastriano worked to overturn the 2020 presidential election and recently appeared at an event that promoted Q-Anon propaganda. He also went to the Capitol on Jan. 6, and has been subpoenaed by the congressional committee investigating the insurrection. He has said he left before the riot.

Like Mastriano, Barnette has made false statements about vote fraud in 2020. She said at a debate that it is “absolutely not” time for the GOP to move past the presidential election.

“Her numbers are starting to line up with Mastriano’s,” said Christopher Nicholas, a longtime Pennsylvania-based GOP consultant. “He endorsed her and she endorsed him, and I said at the time she got the better of that deal.”

A Monmouth University poll in late April found that 18 percent of Republican primary voters said they were “very likely” to back Barnette, compared to 22 percent for Oz and 19 percent for McCormick. A more recent horse-race survey by Trafalgar Group reported Barnette at 23 percent, Oz at 25 percent and McCormick at 22 percent.

In a poll by Franklin & Marshall College released this month, Barnette received a more modest 12 percent, behind McCormick at 16 percent and Oz at 18 percent. That still represented a small uptick for Barnette from its prior survey of the race.

Other contenders in the race include real estate developer Jeff Bartos and former Trump ambassador Carla Sands, both of whom were in low single digits in the Franklin & Marshall poll.

Multiple sources also told POLITICO that in private polling conducted by both Democrats and Republicans, Barnette has seen a surge in recent weeks.

Barnette said she has raised more money on WinRed, the digital fundraising platform, this week than any other in the race.

Some Pennsylvania Republicans are skeptical that Barnette’s polling should be believed.

Rob Gleason, former chair of the state’s Republican Party, said “it would be the story of the century if she would win.”

“I’m not so sure that she is in the mix,” said Gleason, who endorsed McCormick. “I can’t even believe that she would be in the mix the way these guys have spent money.”

If Barnette is surging, it would show that parts of the MAGA movement have outpaced Trump himself.

A former Trump aide described Barnette as running in the “hardcore MAGA lane despite the Trump endorsement of Oz.” On his show, Bannon said others call her “pure MAGA — in fact, Kathy Barnette may be ultra-MAGA.”

One example of her purist approach: in an April debate, Barnette said “MAGA does not belong to President Trump.”