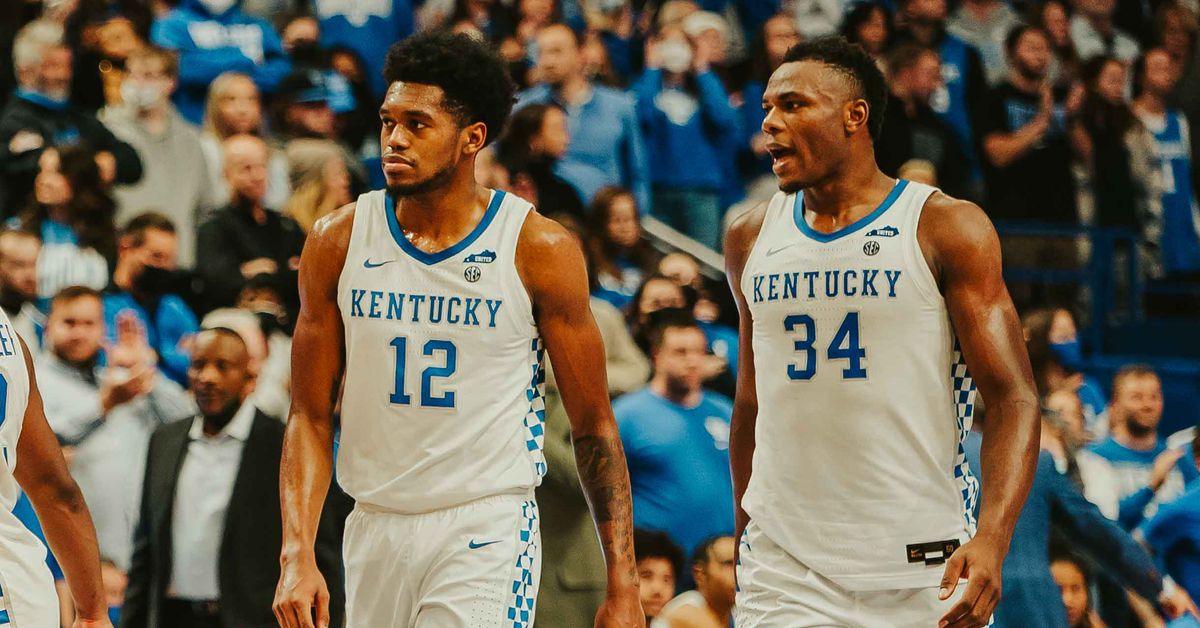 With the conclusion of the 2021-22 college basketball season on Monday night, it is now “Way Too Early” ranking season, and many believe the Kentucky Wildcats will be in good shape come next season.

After losing to Saint Peter’s and with so much roster uncertainty, the Big Blue Nation is in need of some positivity.

So, let’s take a look at where some of the outlets ranked Kentucky and what they had to say, as well as some projections on the starting lineup for next season.

This projection is the best-case scenario for Kentucky, who would have a National Player of the Year in Oscar Tshiebwe, a potential No. 1 overall 2023 NBA Draft pick in Shaedon Sharpe, and high-impact seniors in Sahvir Wheeler, Keion Brooks and Jacob Toppin, plus a very deep and talented bench if Cason Wallace is part of it.

The Wildcats won’t be here when we release this list in the fall if Oscar Tshiebwe, The Sporting News Player of the Year, does not return for another season. He won enough such trophies that he doesn’t have anything more to prove as an individual collegian, but he might want to win an NCAA Tournament game before he leaves, and there could be money for him in the NIL category. And it appears unlikely he will be a first-round pick.

Tshiebwe would be wise to enter the draft to get the best possible information, which seems almost certain, but he could return. The Wildcats have recruited two top-10 wings in the 2022 recruiting class, should get more out of this year’s freshmen, Bryce Hopkins and Daimion Collins, and still should have point guard Sahvir Wheeler in charge of the offense.

With a few more prospects gathered from the transfer portal, there could be enough here to make disgruntled Kentucky fans forget Saint Peter’s.

Perhaps the largest looming draft decision that could realistically go either way is in Lexington, where rebounding whiz Oscar Tshiebwe has to decide whether to return after a record-setting season with the Wildcats. As good as Tshiebwe is, his skill set for NBA purposes is rather limited, and in the name, image and likeness era he’ll have massive money-making opportunities should he stay at Kentucky. Add him next to a senior point guard in Sahvir Wheeler and an elite recruiting class that may even include 2022 draft prospect Shaedon Sharpe, and Kentucky looks loaded for ’22–23.

The National Player of the Year, Tshiebwe coming back is a big key to this ranking, though the Wildcats appear to be on the prowl for transfer portal big men just in case. Brooks is testing the NBA Draft waters, and we didn’t include Shaedon Sharpe, a potential talisman, because he’s a projected top-10 pick. Wallace and Livingston are five-star prospects, and Wallace’s commitment to defense will be welcomed immediately. Is there enough outside shooting at this point? It’s too early to worry about something like that, though it becomes an interesting question if plugging Jacob Toppin in at the four in that lineup.

The Wildcats’ ranking is based on CBS Sports National Player of the Year Oscar Tshiebwe returning to school alongside fellow starters Sahvir Wheeler and Keion Brooks, the latter of whom has declared for the NBA Draft but is maintaining his college eligibility. For now, I’m projecting 5-star guard Shaedon Sharpe to enter and remain in the NBA Draft considering he’s a projected top-10 pick – goal John Calipari’s Wildcats could move to No. 1 if Sharpe ultimately decides to play next season at UK .

The Wildcats would move into contention for the No. 1 spot should Oscar Tshiebwe or Shaedon Sharpe return to Lexington, but given their current draft statuses, we have both players departing. But John Calipari will have a talented group next season either way. Sahvir Wheeler and Keion Brooks Jr. both return to the starting lineup, and the additions of five-star recruits Cason Wallace and Chris Livingston will add some more playmaking to the lineup. There will have to be a breakout player up front, whether it’s former five-star recruit Daimion Collins, Jacob Toppin or someone else, but there are options. Don’t forget about former Iowa transfer CJ Fredrick, one of the elite shooters in college basketball, who missed last season with a hamstring injury.

There are some other notable “early” ranked teams included that Kentucky has a high probability of facing next season, including the Arkansas Razorbacks, Tennessee Volunteers, Alabama Crimson Tide, and Auburn Tigers in Southeastern Conference play.

That’s not to forget playing Michigan Wolverines, Michigan State Spartans, and potentially the UCLA Bruins in the CBS Sports Classic in non-conference play.

That is a lot of good teams and next year’s team will be challenged.

With all that being said, there are hundreds of transfers and announcements that have yet to be announced, so take this all with a grain of salt.

Over the next few weeks, players will begin to announce their decisions, and I expect the roster to begin taking shape before accurate expectations can be set.

Saying this, where do you think Kentucky should be in the early 2022-23 college basketball rankings? Let us know in the comments section!