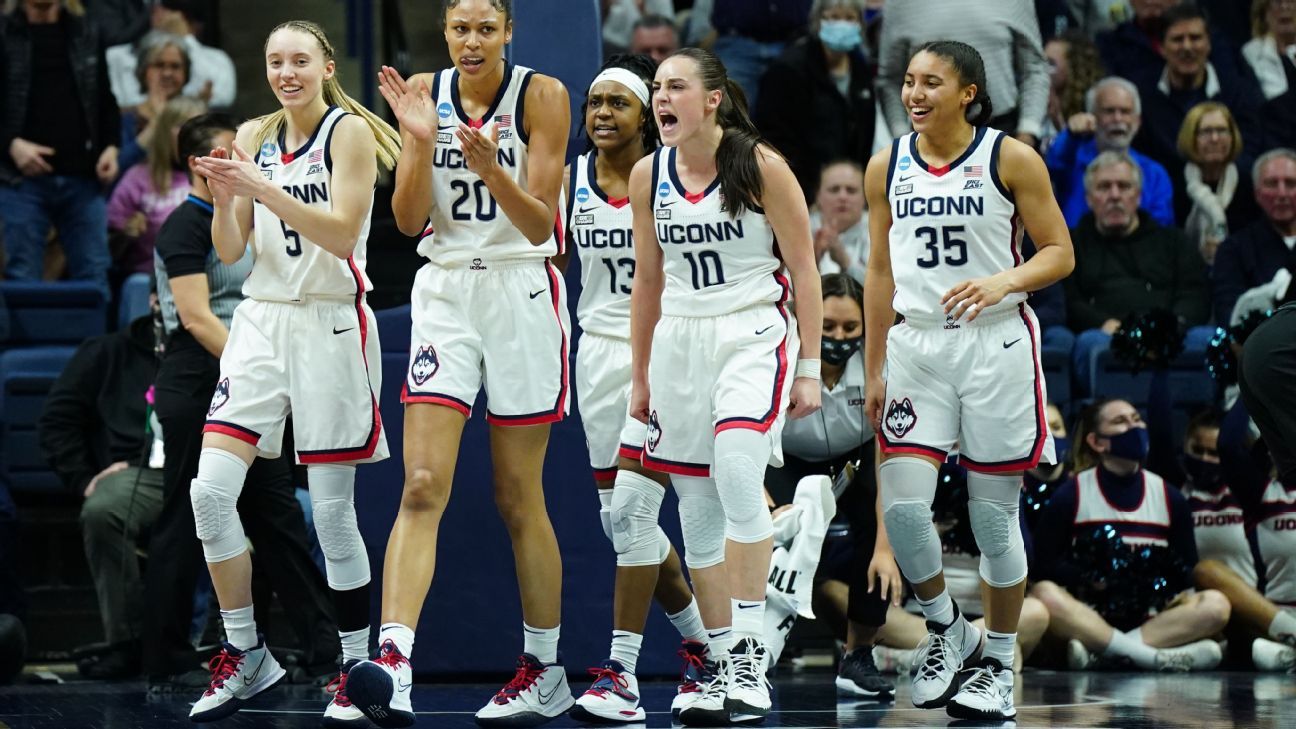 STORRS, Conn. — UConn women’s basketball coach Geno Auriemma said he thought he’d seen it all this season, with his team riddled with injuries most of the campaign and dropping the highest number of pre-NCAA tournament games the program had seen since 2004-05.

But Monday’s slugfest against former conference foe UCF in front of one of the rowdiest Gampel Pavilion crowds in recent memory, with a spot in the Sweet 16 on the line?

“This was a rather new experience for me,” Auriemma said.

Despite shooting a season-low 29.2% from the field, the Huskies eked out a 52-47 victory in which they trailed early by eight, stormed back to go up 12 midway through the fourth and then allowed the Knights to pull back within three with less than a minute to go.

In a season when many of UConn’s historic streaks have been snapped (consecutive games without falling to an unranked opponent, years since dropping a conference game), one of the program’s most impressive runs remains intact: The Huskies have now advanced to the Sweet 16 in a record 28 consecutive NCAA tournaments. They’ll play Indiana, the first meeting in the programs’ history, on Saturday at 2 pm ET in Bridgeport, Connecticut, for a spot in the Elite Eight.

“Not just the tough games, but I think the adversity we faced off the court, as well, has helped prepare us [to battle Monday],” said Huskies freshman guard Azzi Fudd, who hit four 3s and finished with a team-high 16 points.

UCF (26-4), meanwhile, concluded a historic season in which it earned its first AAC regular-season and tournament titles and won its first NCAA tournament game, over Florida in the first round.

The Huskies left a slew of points on the board across the contest, making just two of 12 layup attempts.

But UCF also let the game slip away with poor free throw shooting (10-for-20). That included a pair of misses from the charity stripe with 2:21 remaining that could’ve cut the deficit to three and another set with 22 seconds left down just three (with the second foul shot called off due to a lane violation).

UConn’s 52 points were the fewest it has scored in an NCAA tournament win in program history.

The Huskies were very familiar with the UCF’s physical style of play from their time in the American Athletic Conference from 2013 to 2020, when Auriemma’s squads prevailed 13-0 in the series. But the intensity was ratcheted up a notch on Monday in front of a boisterous, sellout Gampel crowd that was packed with students recently returned from spring break and fans just as eager to watch what more closely resembled a boxing match than a basketball game.

The Knights punched first to go up 17-9, before UConn countered with some edge of its own. On one play early in the first quarter, reigning national player of the year Paige Bueckers and Tay Sanders kept tussling over a jump ball even after the refs blew the whistle, before Bueckers turned toward the crowd and rose her arms to amp up the fans.

Three players crowded out (Olivia Nelson-Ododa and Aaliyah Edwards from UConn as well as Alisha Lewis from UCF) before the end of the night, with multiple others committing four apiece.

“We were expecting to be physical, but I don’t think they were expecting us to be as physical,” said UCF guard Diamond Battles, who finished with a team-high 12 points. “We came out and did what we do best. The toughness, that’s what we are. UCF is a tough, gritty team, and we’ll always be that way. From the beginning, we knew how we had to play, and we played that way for 40 minutes.”

“There’s times when you’re just in a rock fight and you just gotta figure out a way to get through it,” he said. “And there’s other times where it feels like you’re at a ballet and nobody’s touching nobody.”

Monday’s performance was certainly not a ballet.

The Knights, who entering the game boasted the top scoring defense in the nation, didn’t turn UConn over exorbitantly, but their press and aggressive defense slowed it down and disrupted its offensive flow. And when the Huskies managed to get good looks, which they did more and more as the game went on, they missed shots they typically make. They also were completely neutralized in the paint, where they scored just 10 points.

For a team that tends to win with finesse, UConn had no option but to out-tough the Knights if it wanted to advance to Bridgeport. The Huskies settled in defensively and found a bit more of a groove on offense, slowly but surely crawling ahead by double figures early in the fourth.

“We just fought back,” said UConn senior Christyn Williams, who finished with 12 points. “That was the only thing we really could do was just hold our own and fight back. And that’s exactly what happened: We just kept on throwing punches, and eventually they backed down.”

UCF had one more burst in it, though, using nine unanswered points to make it a one-possession game with a minute to play, but between its missed free throws and UConn’s 4 for 4 finish from the foul line thanks to Williams and Fudd, the Huskies would live to play another game.

“Toughness is making all those free throws at the end,” Auriemma said. “Toughness is getting a huge rebound at a big time. Toughness is Christyn making that 3 [early in the fourth to put UConn up by 11] when she had to make it. And I think we showed that. I think all the other stuff was just fluff.”

The road won’t get easier for the Huskies from here on out; Indiana awaits, and then should they advance, the winner of ACC champion NC State versus Notre Dame with a trip to Minneapolis within reach.

The Huskies will have to play closer to the best version of themselves to get through that gauntlet, though to the team, managing to overcome yet another bout of adversity offers a lesson nonetheless.

“There’s something to be said for that you can win a game that you probably would look back and say I’m not sure how we won that game, but we did,” Auriemma said.