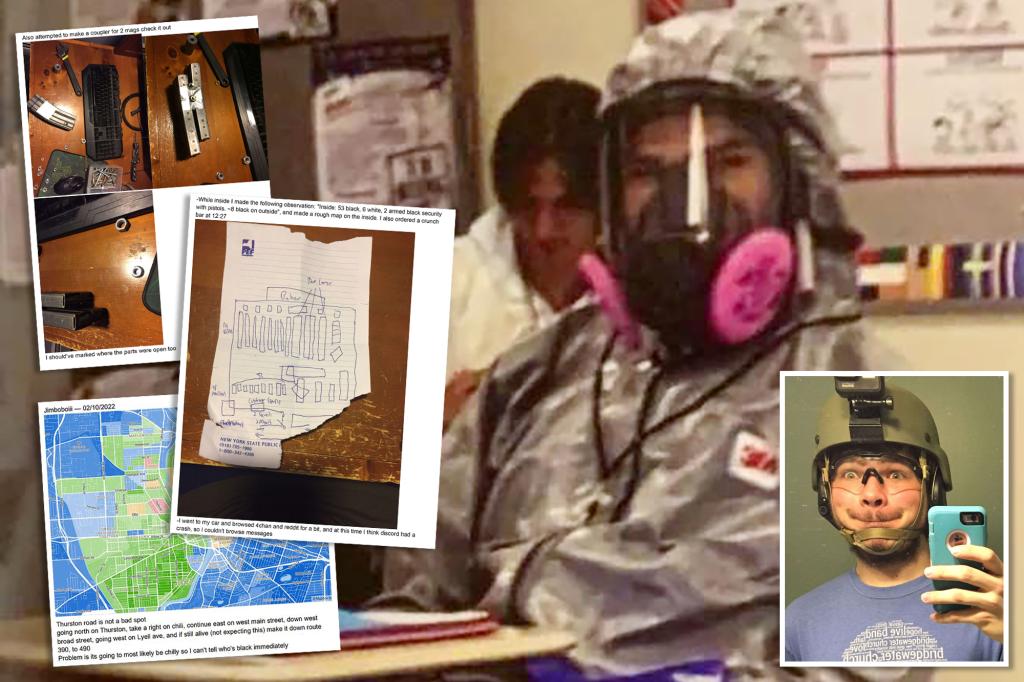 The avowed white supremacist who killed 10 people at a Buffalo supermarket first became radicalized during the early days of the COVID-19 pandemic by scouring extremist internet messaging boards, according to his twisted online diary.

Payton Gendron, 18, spent months reflecting on his plans to conduct a mass shooting in the digital journal and said his exposure to 4Chan, an online message board known as a hotbed for extremism, kept him motivated to stick to his plans.

“My current beliefs started when I first started to use 4chan a few months after covid started,” Gendron wrote in the diary, which was posted on the Discord app and was taken down after the attack.

“Every time I think maybe I shouldn’t commit to an attack I spend 5 min [on] /pol/, then my motivation returns,” he wrote in another entry, referencing the message board’s politics section, which is known for racist and anti-semitic content.

The diary, a copy of which was provided to The Post by the International Center for the Study of Radicalization, features thousands of daily diary entries that offer a glimpse into Gendron’s mind in the months leading up to the shooting.

“It’s his diary that really stands out, as it gives us insight into the person behind the image. It shows his uncertainty over whether he could murder people. Over a dozen times he wrote about wanting to commit suicide instead,” Dr Rajan Basra, a researcher from ICSR, told The Post.

“He was essentially having a conversation with himself, at times doubting what he was doing, and other times doubling down on his racist beliefs. The diary shows a volatile mix between racist beliefs, white nationalism, and complex mental health issues.”

Many of the entries express doubt and fear over the attack and how his only options were to either go through with it, or commit suicide.

“I’m not proud to kill these lads, in fact I’m desperately looking for a sign or evidence proving that I shouldn’t,” he wrote of his plans to shoot and kill black people in a crazed effort to “save” the white race.

“I can’t tell you how much I don’t want to do this attack My only other choice is suicide I can’t go back,” Gendron wrote on March 16.

“I have wondered if I’m mentally ill, and that’s why I’m planning the attack like I am now,” another entry from February states.

“The past 7 years have hurt so much, I think I’m ready to abandon it all.”

Other entries offer clues into how he was radicalized.

In one post from mid-January, Gendron wrote that he believes he was born three separate times – the most recent time being some point between March 15, 2020 and May 5, 2020, which was the initial COVID-19 lockdown and when he first started browsing 4Chan.

“There I lost myself and a bit of my sanity,” Gendron wrote of the pandemic’s earliest days.

“I remember I went to my cousin’s house with a mask and full get up and no one else did and seeing that caused me so much pain. Eventually it was too much to bear and I had to leave early and walk home through the woods, I then barricaded myself in the basement for a few days.”

Gendron had originally scouted out Rochester for the shooting but settled on Buffalo in mid-February when he found it had a larger population of black residents. Originally scheduled for March 15, the three year anniversary of the Christchurch shootings in New Zealand, Gendron repeatedly pushed back the attack until he decided to move forward on Saturday.

Many of the posts focused on the extensive measures Gendron took to procure equipment, such as a military-grade helmet, from online retailers like eBay and Amazon and the sort of clothes he planned to wear in the shooting, including a specific type of socks.

Other entries detail more mundane musings, like Gendron’s efforts to lose weight ahead of the attack. For weeks, his entries included a list of food he ate each day, a daily calorie count and his weight while other posts explained a scam he undertook to obtain free McChickens from McDonald’s.

In a series of entries, he wrote about his relationship with his family and efforts he took to raise money for the attack, including plans to sell his jackets online and trips he took to local flea markets to buy silver coins he could later resell at a higher rate.

“Promise me if you have a child you will be there and you will be close, be a friend to your child and make sure they know that you will always help them. Talk about their problems and ways to solve it and NEVER make them feel bad for coming to you.”

He’s facing one county of murder in Erie County and could see upgraded hate crime and domestic extremism charges soon after the case is presented to a grand jury.