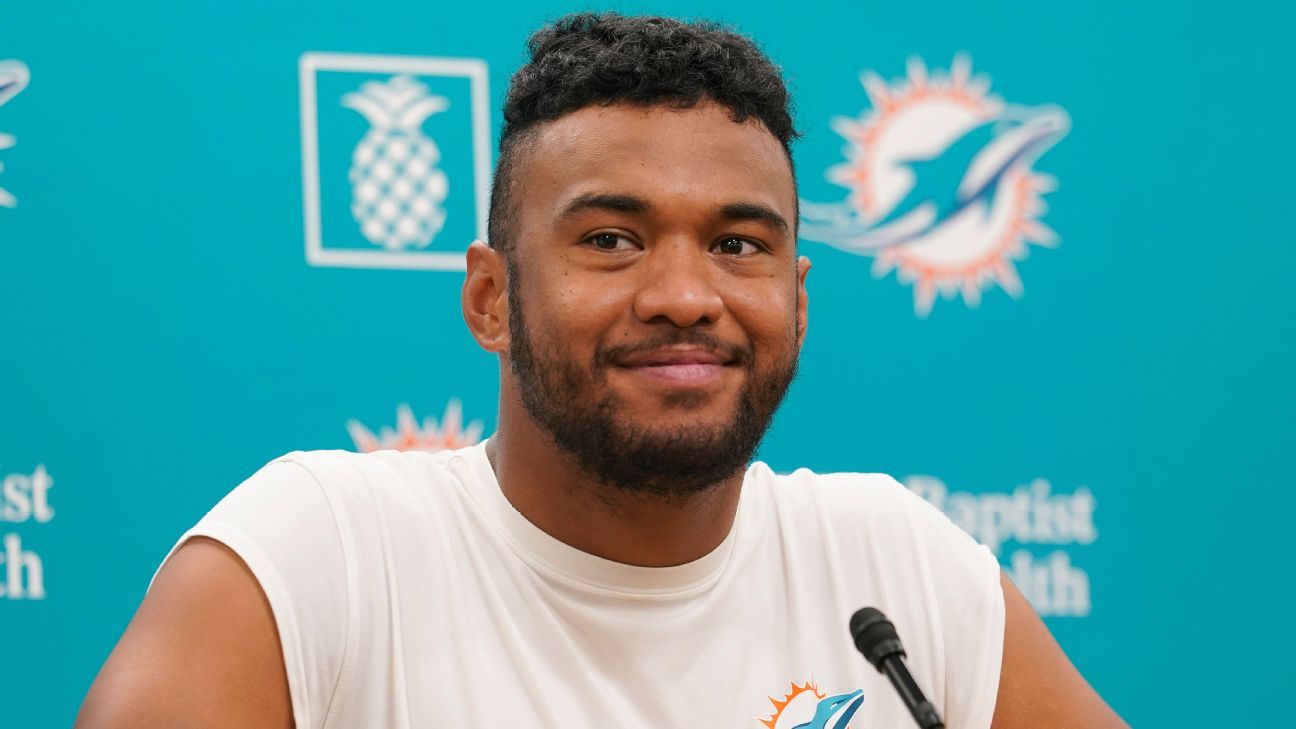 MIAMI — All signs point toward the pressure being on Dolphins quarterback Tua Tagovailoa for the 2022 season.

With few, if any, questions remaining about his supporting cast, it’s easy to point to Tagovailoa as the catalyst for the team’s success this season.

But in his mind the pressure to succeed is akin to the sunshine in Miami — it’s always there.

“I think pressure is going to be there every time,” he said Wednesday. “I don’t feel more pressure that we’ve acquired all of these guys. It’s more of an opportunity that I get, that we all get as a team, to show what we can do this year.”

Tagovailoa and the Dolphins returned to their team facility at the beginning of April to start their offseason workout program, which is optional for players to attend.

Several veterans, like cornerback Xavien Howard and offensive tackle Austin Jackson, have spoken about the strong attendance at Miami’s workouts thus far, with Tagovailoa bolstering that narrative during his first media session of the offseason Wednesday. The third-year quarterback also credited first-year head coach McDaniel for the work he has done thus far.

“The locker room feels different. We’re all excited,” Tagovailoa said. “This is the first time I’ve seen a lot of guys show up to Phase I of OTAs and a lot of veterans are showing up to it. I think that speaks a lot to Mike and the relationship he has with a lot of the guys on the team and the amount of respect that he has from the players in the locker room.”

Tagovailoa spoke about his relationship with McDaniel, as well, citing McDaniel’s presence at his charity event earlier in April.

He said McDaniel “doesn’t force you to be what you’re not,” which has endeared him to his players through his first few months at the helm.

While the focus on a team generally revolves around its quarterback, the additions Miami has made, specifically on offense, were done more with McDaniel in mind than Tagovailoa. General manager Chris Grier said many of the team’s new players fit Tagovailoa’s skill set, but all fall under what McDaniel wants to do with his offense.

“Yeah, I think a lot of that, too, has to do with Coach McDaniel and his coaching staff. Kind of the offense that Mike does and what he’s building here and what his philosophy has been,” Grier said. “I think yes, we’ve added some pieces on offense as well, but a lot of it fits what Mike is looking for.

“The locker room feels different. We’re all excited. This is the first time I’ve seen a lot of guys show up to Phase I of OTAs and a lot of veterans are showing up to it. I think that speaks a lot to Mike and the relationship he has with a lot of the guys on the team and the amount of respect that he has from the players in the locker room.”

“A lot of it does fit what Tua does well and I think we’re all very excited. I know Mike has been raving about Tua here over — him and Coach (Darrell) Bevell — their time working with him and spending time with him in the meeting rooms and watching him on the field here yesterday. So yeah, we’re very excited for him and looking forward to the season and how he keeps progressing.”

Tagovailoa’s 2021 season made many pundits around the league critical of his ceiling. He finished with the seventh-best completion percentage in the NFL last season, but his 6.92 average air yards per attempt ranked eighth lowest in the league, while his 10.09 average yards per completion ranked seventh lowest.

But that was under the Dolphins’ previous regime. Under a new offensive staff, Tagovailoa expects to be more efficient in his third NFL season — especially with the weapons he now has at his disposal.

“I sat down with the head coach and we went over about 150 clips of throws,” he said. “Throws that need to be better, throws that were good, all sorts of throws. The reason as to why he showed me that is it transitions to the way he kind of schemes up the offense.

“Really, the biggest thing for us is YAC (yards after catch). We want to YAC the heck out of teams.”