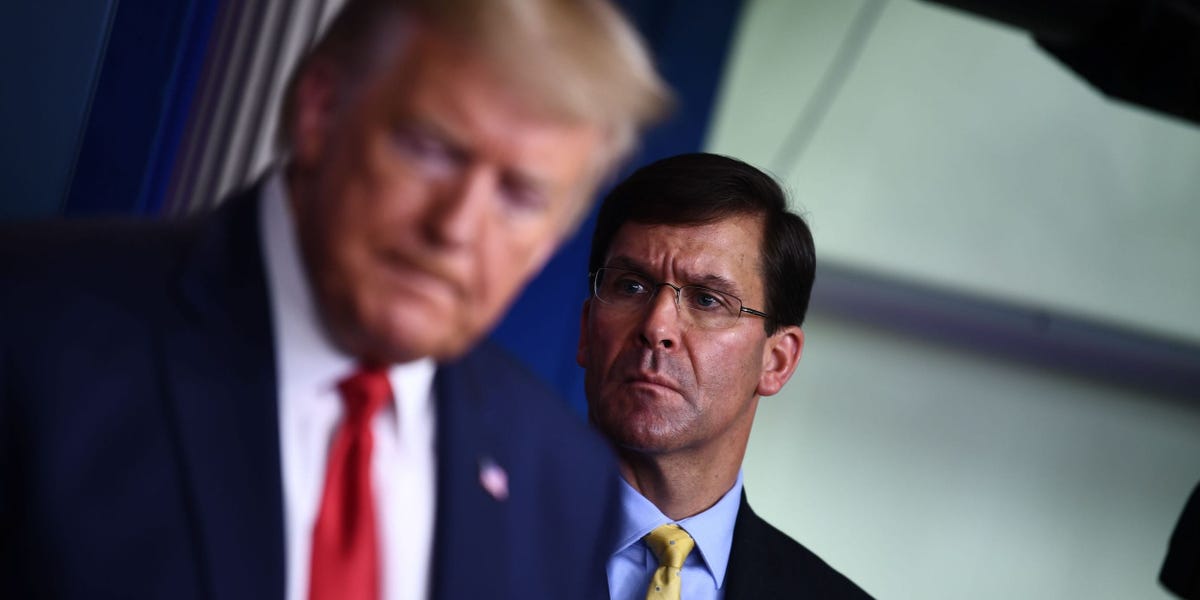 Former President Donald Trump wanted to take the extraordinary step of reactivating retired US Navy Adm. William McRaven so that he could court-martial the former Navy SEAL commander for criticizing him, Trump’s former Pentagon chief claims in his new book.

Former Secretary of Defense Mark Esper writes that he and Chairman of the Joint Chiefs of Staff Gen. Mark Milley had to talk then-President Trump out of a plan to recall both retired US Army Gen. Stanley McChrystal and McRaven to active duty as a way to open the two former senior military officers up to court-martial proceedings.

“Doing this ‘will backfire on you, Mr. President,’ we said,” Esper wrote of a May 2020 meeting in his book “A Sacred Oath: Memoirs of a Secretary of Defense During Extraordinary Times,” which is out today.

Trump told Esper and Milley that McRaven and McChrystal were “so disloyal” because of what they were doing and had said about him. Esper writes that Trump was “spun up” by media stories in Breitbart alleging that McChrystal was advising Democrats on how to use artificial intelligence to “track down and counter Trump supporters.”

Both McRaven and McChrystal had also crossed Trump in the past, which only further inflamed the president.

In 2018, McChrystal — who served as the head of the Joint Special Operations Command from 2003 to 2008 and later was appointed head of all international forces in Afghanistan — criticized Trump’s decision to remove US troops from Syria and said he believed Trump was immoral and doesn ‘t “tell the truth.”

McRaven, a former head of US Special Operations Command whose military career included leading Operation Neptune Spear, the raid on al-Qaida leader Osama bin Laden, was a frequent critic of Trump throughout his presidency.

Shortly after Trump’s inauguration, McRaven criticized the president’s continued attacks on members of the media, arguing it was “the greatest threat to democracy” in his lifetime.

In a 2017 Washington Post column, McRaven said the Trump White House decision to revoke the security clearance of former CIA Director John Brennan was an effort to “suppress freedom of speech and punish critics” and said he would “consider it an honor” if his security clearance was also revoked.

McRaven gave a number of media interviews and wrote several more op-eds criticizing Trump during his presidency. While it is not uncommon for retired military officers to give their opinion for or against a president, McRaven’s comments attracted significantly more attention due to his rank and notoriety.

Milley, Esper writes, finally got Trump to back down from his threat to go after retired officers by promising to “personally call the officers and ask them to dial it back.”

McChrystal told Talking Points Memo that he did not remember receiving such a call from Milley. A spokesperson for Milley did not respond to a request for comment.

Esper writes in his book that the entire episode was emblematic of a White House that constantly pushed, if not sometimes crossing, the line between politics and the management of America’s defense. Loyalty purges, Esper writes, targeted both current and former commanders.

“Worse yet, people were removed from positions simply because the White House wanted to replace them with more hard-core Trump loyalists, regardless of qualifications,” writes Esper, who often drew Trump’s ire and was fired and replaced shortly after Trump’s loss in the 2020 election.

Trump, in response to the publication of Esper’s book, repeatedly called his former Pentagon chief “Yesper” and claimed that he had to effectively “run the military” himself.