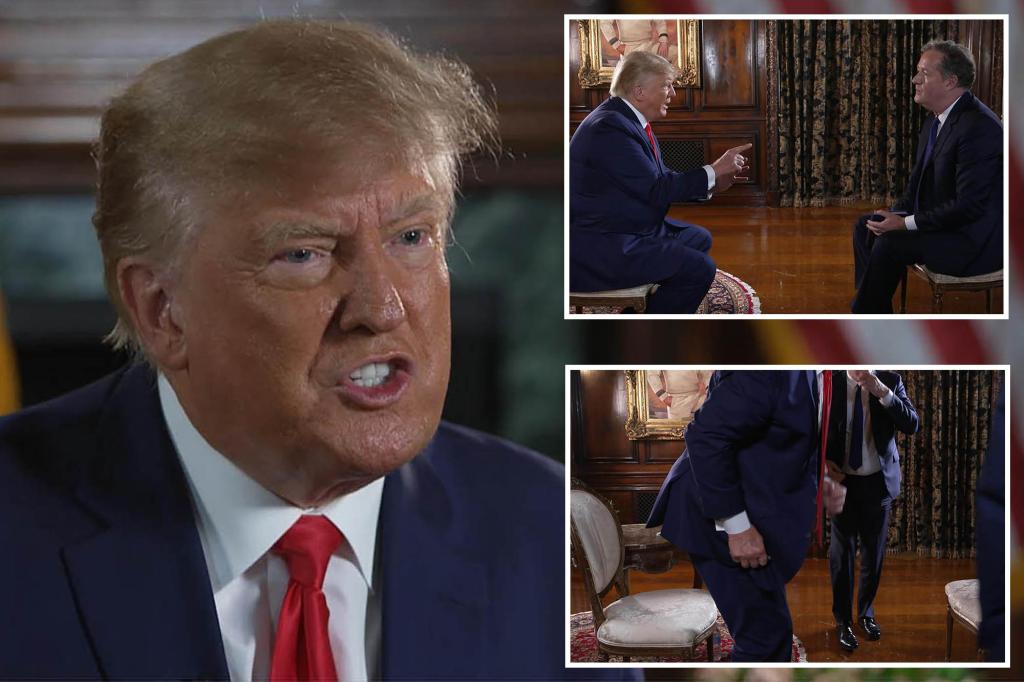 Donald Trump’s team has released audio that it says refutes Piers Morgan’s explosive claims that the former president cut off their interview and stormed off the set after calling the host and Post columnist “very dishonest.”

In the recording, obtained by NBC News from Trump’s spokesman Taylor Budowich, the two men are heard thanking each other and laughing at the end of the interview.

“That was a great interview,” Morgan says, according to the outlet.

“Thank you very much. I really appreciate it,” Morgan adds before Trump says, “Turn the camera off.”

This amiable account appears to be in contrast to a promotional clip of the highly-publicized sitdown released by Morgan’s team for his upcoming show “Piers Morgan Uncensored,” where Trump is seen becoming increasingly frustrated with the questions.

At one point, the former president calls the TV presenter a “fool” as he grilled him about the 2020 election, the clip shows.

Trump has steadfastly alleged since Election Night of 2020 that moves to expand mail-in voting due to the pandemic concealed election fraud by Democrats and their surrogates in key swing states.

The preview clip ended with the 45th president getting out of his seat and ordering production to “turn the camera off.”

“Very dishonest,” he added while walking away.

However, Budowich told NBC News that by that point, the former president had already gotten up from his chair.

Trump’s communications director alleged that the show’s producers deceptively edited the clip by splicing the sound of Trump saying “turn the camera off” to make it seem he issued the order while getting up in anger.

In a column in The Post, Morgan wrote that Trump attacked him for exceeding the 20-minute limit for the interview, “which was particularly disingenuous given that during all our previous interviews, he’d invariably decided exactly how long he wanted to keep talking .”

Budowich said that toward the end of the interview, which lasted well over an hour, the rep called for the last question—but the audio appears to show that Morgan asked several more.

In the promotional clip, Trump says, “I think I’m a very honest man … much more honest than you, actually.”

Morgan also tells Trump the 2020 vote “was a free and fair election. You lost.”

“Only a fool would think that,” Trump shoots back, the promotional clip shows.

When Morgan tells Trump he has not “produced the hard evidence” of election fraud, the former commander-in-chief responds, “I don’t think you’re real” – and later turns to the production crew and calls his interviewer “ very dishonest.”

In his column, Morgan revealed he also told the former president that he blamed Trump’s refusal to admit defeat for the deadly Jan. 6, 2021, Capitol riot.

“Then you’re a fool! And you haven’t studied,” Trump responded, according to Morgan.

The host added that Trump initially tried to end the interview by declaring “That’s it!” but remained in his seat to discuss a recent hole-in-one he scored while playing golf.

The full interview will air on the premiere episode of “Piers Morgan Uncensored” on Fox Nation on Monday.