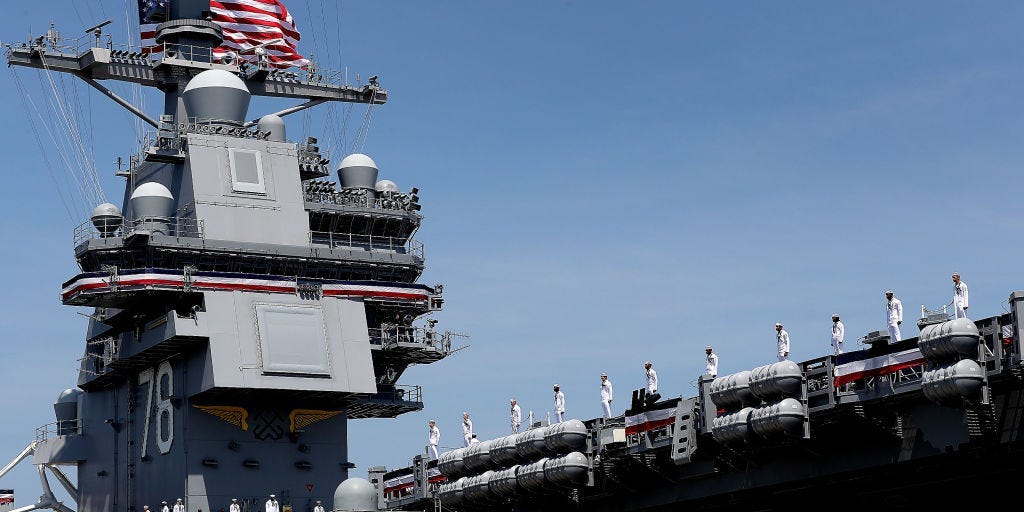 When Donald Trump was president, he liked to complain regularly about the US Navy’s new $13 billion aircraft carrier USS Gerald R. Ford, regularly fixing on “the look” of the large ship, Trump’s former defense secretary, Mark Esper, recalls in his new book.

In “A Sacred Oath: Memoirs of a Secretary of Defense During Extraordinary Times,” Esper writes that Trump often griped about the “overpriced” and “broken” $13 billion carrier, complaining that its catapults didn’t work and its elevators were broken. The former president also said that the command center, commonly known as the island, was positioned too far back and not close enough to the middle of the carrier.

The island “looks really bad – it’s stupid,” Trump said, according to Esper, who added that the former president proposed moving the structure closer to the middle of the ship, which would have been a costly and largely pointless endeavor.

“Peril,” a book written by Washington Post reporters Bob Woodward and Robert Costa that came out last year, also noted the former president’s frequent complaints about the carrier Ford, particularly the placement of the island.

The book said that Navy officers attempted to explain to the president that the command center was positioned the way it is to better facilitate aircraft operations, but Trump insisted that “it just doesn’t look right,” stating he has “an eye for aesthetics .”

Esper explained in his book that “the most important thing always seemed to be about the image and ‘the look.'” He wrote that Trump said of the Ford that “it looks horrible.”

The former defense chief wrote that he recalls the president calling US ships “ugly” on multiple occasions, sometimes comparing them to Russian and Italian models he claimed “look nicer, sleeker, like a real ship” as he flipped through pictures of foreign ships.

Esper responded to Trump’s gripes by saying, “Our ships are built to fight and win, not win beauty contests; we prize function over form.” He wrote that Trump did not seem happy with this answer.

Trump complained – both privately and sometimes in public – about the ship’s catapult system, which uses electrical currents to catapult aircraft off the flight deck. The electromagnetic aircraft launch system, or EMALS, is new technology intended as an improvement over the older steam catapults on the Nimitz-class carriers.

Although the new system had experienced problems during its development, it was designed to be safer, more effective, and more efficient than the older catapults. Despite this, Trump claimed throughout his presidency that the new tech was too complex, at one point stating “you have to be Albert Einstein to figure it out.”

Esper wrote that Trump also complained about the Ford’s Advanced Weapon Elevators, claiming they would break if exposed to water.

“One glass of sea water. Just one. That’s all it will take. Once it splashes those elevators they’ll never work,” Trump said according to the new book, citing his experience in real estate industry.

While the elevators, which are used to move weapons and ammunition around the ship, have experienced some integration challenges and delays, they are designed to operate aboard naval vessels at sea.

“I had visited the Ford in Norfolk early in my tenure – and tried to explain the issues to the president many times,” Esper wrote in his book. “He listened but never heard.”

The first-in-class Ford is expected to finally, after significant delays and cost overruns, be ready for naval operations this year. Three other Ford-class carriers, the John F. Kennedy, Enterprise, and Doris Miller, are in various stages of development and construction.