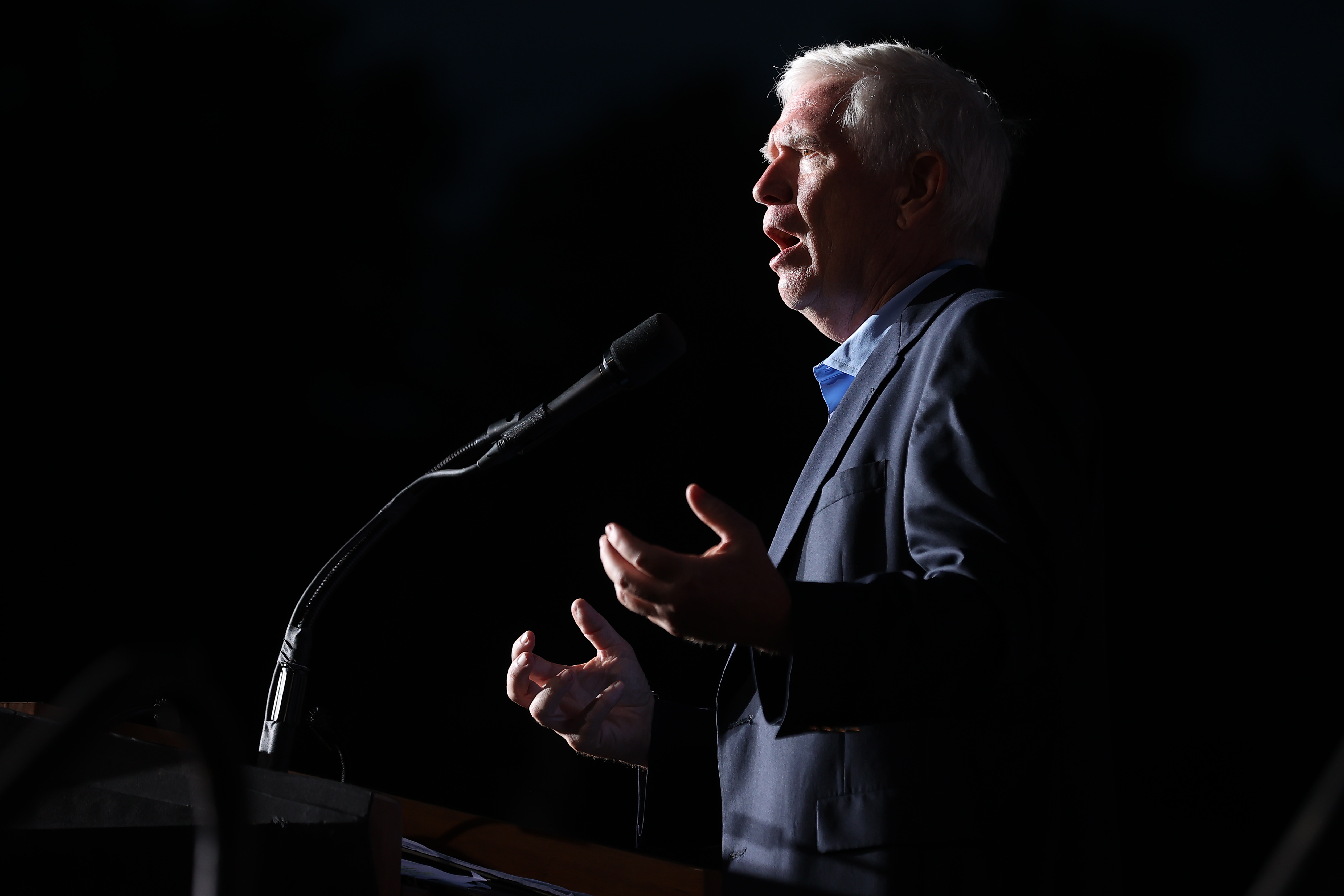 The result has been voters moving back to Brooks, the one-time frontrunner whose conservative political career dates back to the early 1980s but is best known as a driving force in Congress behind Trump’s efforts to overturn the 2020 presidential election results.

“Right now, it looks like he’s going to be in the runoff, and two months ago you would have said there’s no chance of that,” said Chris Brown, a Republican strategist in the state who isn’t working for any of the Senate campaigns.

A poll released Thursday by the Alabama Daily News and Gray TV put Britt at 31 percent, Brooks at 29 percent and Durant 24 percent — a jump of 12 percentage points for Brooks since the same poll was conducted in March. Durant, meanwhile, has fallen 10 points and Britt 3 points. A separate poll issued Friday by the pro-Britt Alabama Forestry Association showed Britt with a commanding lead at 37 percent. Brooks was in a distant second at 25 percent, just ahead of Durant at 24 percent.

A Britt-Brooks runoff could end up pushing Trump to endorse a candidate in Britt with strong establishment ties over his initial pick in the race — a congressman who not only championed Trump’s disproven election fraud narrative, but is actively campaigning on a “Fire McConnell” platform.

Brooks is the only Alabama Senate candidate to explicitly say he will not support Senate Minority Leader Mitch McConnellone of Trump’s top GOP foes who has worked to try to stop Brooks from securing the nomination.

Trump’s decision to pull his support from Brooks — which came in late March as Brooks’ campaign flooded — wasn’t the death blow that many anticipated.

“I’ve not seen that move the needle,” said Terry Lathan, a longtime conservative activist in the state, who served as chair of the Alabama Republican Party until last year. “If it did, how is it possible Mo Brooks has picked up 10 to 15 points in polls?

“What people are saying — and I agree with them — is you can like Donald Trump on a ballot and his policies, but you can also like Mo Brooks and his voting record.”

Lathan, who volunteered as co-chair of Brooks’ campaign after remaining neutral in the state’s last two open-seat Senate elections, said Brooks has the “gold standard voting record for the Republican Party, in every category.”

She and the campaign are banking on voters recognizing that conservative record, which provides a contrast with the other two leading candidates who lack any voting history at all.

Britt has had to answer for her support for a state gas tax increase in 2019, when she was CEO of the Business Council of Alabama. Durant has been attacked by pro-Britt super PACs that have run television ads and sent a series of mailers criticizing him for his past comments on gun control and immigration—two critical issues for Alabama Republican voters.

Brooks was endorsed by the National Rifle Association, a move that came after Trump pulled his support. Brooks also has a 100 percent rating from NumbersUSA, a leading anti-immigration group, and an A+ from the anti-abortion Susan B. Anthony List.

Sen. Ted Cruz (R-Texas) and Sen. Rand Paul (R-Ky.) will both stump for Brooks on Monday in a last-minute effort to shore up support for the congressman. Cruz will attend a daytime rally in Huntsville, and Paul will take part in an evening tele-town hall with Republican voters.

Brooks’ involvement in trying to overturn the 2020 election results — culminating in Brooks speaking at the president’s Jan. 6, 2021 rally just prior to the storming of the Capitol — has loomed over the race since the start. While it helped win Trump’s endorsement, Brooks didn’t go far enough in the defeated former president’s eyes.

Despite being the only candidate in the Senate primary who worked to keep Trump in office following his 2020 loss, Trump justified pulling his endorsement of Brooks in March by saying the congressman had gone “woke” by suggesting it was time for Republicans to look ahead to the 2022 and 2024 elections.

One important ally never deserted Brooks: the anti-tax Club for Growth, which endorsed the congressman early on in the race. It’s not the only time the organization found itself at odds with Trump — the Club’s super PAC has supported rival candidates against his Senate picks in Ohio and Pennsylvania.

“He is back from the dead,” said Steve Bannon, a former Trump strategist who now hosts the conservative “War Room” program. “It’s a great comeback he’s had, but a big part of that is Durant’s collapse.”

Bannon, who recently had Britt on his show, said he still thinks the race is Britt’s to lose if Trump endorses her ahead of a June 21 runoff. But Brooks, “a Jeff Sessions agrarian populist” with a long history in Alabama, still has a shot if Trump were to sit it out, Bannon told POLITICO.

Jon Gray, a Republican consultant in the state who also isn’t working for any of the campaigns, predicted that if Britt emerges first in the primary election Tuesday, she’ll win the runoff, too.

Gray said he thinks the polling numbers for Britt, Durant and Brooks have all been soft for months, with voters moving back and forth between the candidates due to a “lack of trust” for each of them. Brooks’ campaign, which experienced a staff overhaul late in the race, was barely functioning for months and was late going up on television — then he lost the Trump endorsement.

Britt’s ties to establishment Republicans have prevented her from consolidating much of Brooks’ support. And Durant, who refused to participate in debates, has been attacked for being backed by a super PAC with loose ties to the anti-Trump Lincoln Project.

While it’s clear from polling data that Durant’s brief rise earlier this spring corresponded to Brooks’ slip — now, the opposite is true.

“The people who have been chasing the Durant-Mo Brooks bandwagon have to be dizzy at this point,” Gray said.

The individual campaigns’ ability to get voters to turn out for a late-June runoff during prime vacation season will decide the winner. Gray noted the early work of the Britt campaign in establishing a voter outreach program and cited it as an advantage in a runoff. And Britt will have the money to get her message out in the weeks leading up to a runoff, Brown said, but the low summer turnout could favor Brooks since he’s likely to draw the party’s most hardcore activists.

“I think Mo could win,” Brown said of the runoff. “We saw this in 2017. Why did [former GOP Sen.] Luther Strange loses the nomination? Because the urban and suburban voters did not turn out in a summer runoff.”

Lathan, the former state party chair, had his own theory of the case for why Brooks could surprise. She pointed to Trump’s record of unsuccessfully endorsing in Alabama Senate races in 2017, when Strange, the former president’s endorsed candidate, lost a primary to Roy Moore. Trump then backed Moore in the general election, but Moore lost to Democrat Doug Jones after allegations of past sexual misconduct came to light.

“He’s done that before in our state, and fell short as well,” Lathan said of Trump’s involvement in Senate elections. “Why would you want to stop one of the most conservative votes in the US Congress? We’re one of the reddest states in the nation.”