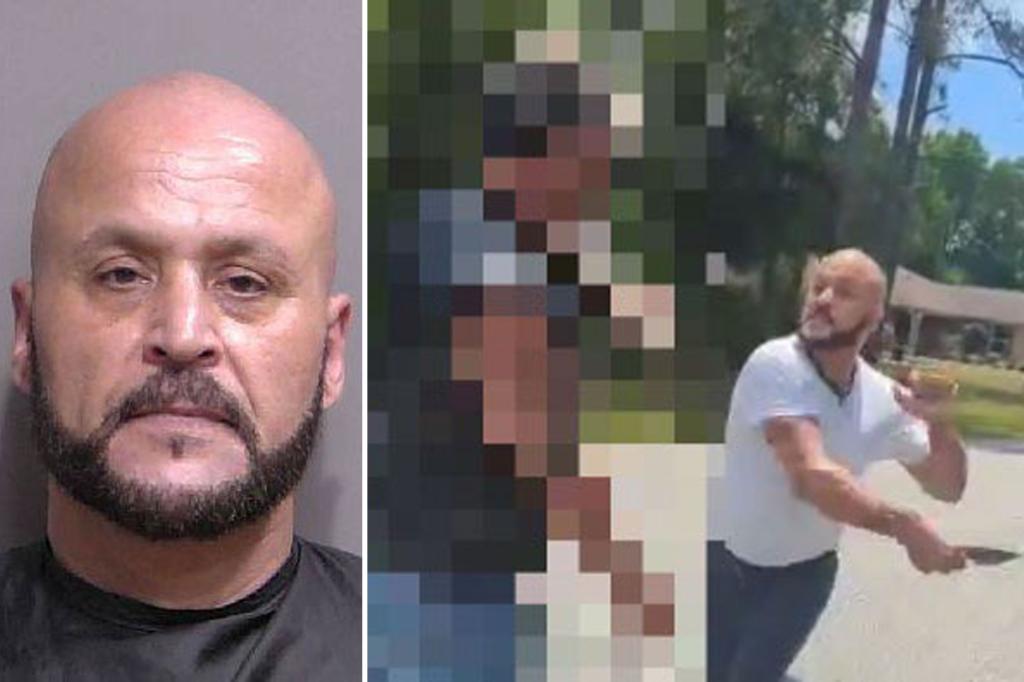 A knife-swinging truck driver and a gun-toting motorcyclist faced off in the street in a wild road-rage confrontation in Florida on Tuesday, video shows.

The rowdy encounter unfolded after Rafael Rivera, 50, who was driving a gray Toyota Tacoma, allegedly cut in front of a motorcyclist at the intersection of Pine Lakes Parkway and Whirlaway Drive just after 1 pm, according to the Flagler County Sheriff’s Office.

When the two vehicles came to a stop, Rivera got out of the truck with a knife in his hands and approached the motorcyclist, according to footage released by the sheriff’s office.

The motorcyclist, expecting confrontation, slipped on a pair of brass knuckles, cops said.

The clip, recorded by the biker’s female passenger, shows the two exchange expletives in the middle of the road before Rivera swipes the knife in the biker’s face.

The motorcyclist — who has a concealed carry permit — then draws a gun from inside his vest pocket after “fearing for his life,” cops said, and points it at Rivera, video shows.

“I swear to God put that f—ing thing down right now motherf—r,” the biker yells at Rivera, who immediately begins retreating.

Rivera can then be heard calling the police and telling them “I just had a guy pull a gun on me,” the clip shows.

Moments later, Flagler County deputies responded to the scene and detained both men as they investigated the incident, cops said.

After reviewing the footage taken by the passenger and interviewing witnesses, Rivera was arrested for aggravated assault with a deadly weapon without intent to kill. He was taken to the Sheriff Perry Hall Inmate Detention Facility where he is being held without bond.

“After his life was clearly threatened, he lawfully defended himself and then de-escalated the situation,” Staly said in a statement. “The offender is lucky he was not shot. I also remind the community to not take traffic enforcement in your own hands and control your anger. Call the Sheriff’s Office instead.”