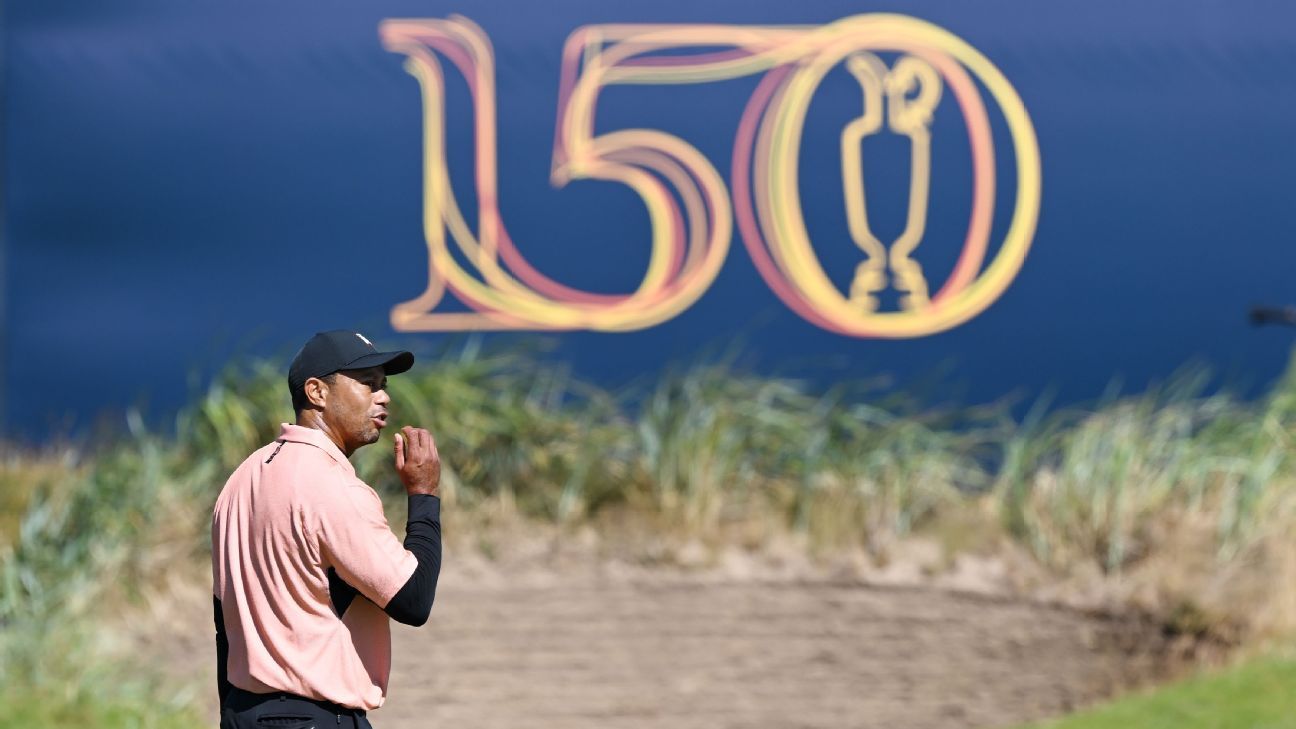 ST. ANDREWS, Scotland — After Tiger Woods ripped his tee shot down the 18th fairway during a practice round at the Old Course at St. Andrews on Sunday, Justin Thomas followed his ball in the air and said, “Oooh!”

When Woods’ ball bound down the sun-baked fairway and bounced high onto the green, Thomas added, “Boing!”

Woods, a two-time winner of The Open at St. Andrews (2000 and 2005), ended up driving the green, leaving an eagle putt short and tapping in for his third birdie of the round. He also had birdies on the par-4 seventh and par-3 eighth, on which he stuck his tee shot to about 5 feet.

It was an encouraging start for Woods, five days before the start of the 150th Open Championship.

It was the first time this year that Woods played a full 18-hole practice round before a major. At the Masters in April and the PGA Championship in May, Woods played nine-hole practice rounds leading up to the tournaments to preserve his strength. Woods and Thomas also walked 18 holes Saturday night, chipping and putting along the way. They were on the course until shortly after 10:30 pm local time.

Woods, a 15-time major champion, declined to talk with reporters after Sunday’s practice round. He is scheduled to talk to the media on Monday and Tuesday.

“He was struggling early, but came on as the day went on,” Woods’ caddy, Joe LaCava, told ESPN. “That’s encouraging.”

If nothing else, Woods seemed to be having a lot of fun before what might be his final start in The Open at St. Andrews. He has won the event three times; he also won at Royal Liverpool in 2006.

On the demanding par-4 17th hole, famously known as the Road Hole, Thomas hit his tee shot high and right toward the Old Course Hotel.

“Hit a window!” Thomas yelled, before his ball bounced into the lawn in front of the hotel.

Woods took the same aggressive line as Thomas on his tee shot, aiming over the roof of the former railway shed down the right side. Woods’ tee shot ended up in the fairway, but then he hit his approach shot into a cavernous bunker to the left of the green. He chipped out to about 2 feet to save by.

Before making birdie on the 18th, Woods stopped to take a photograph with Thomas, LaCava, Thomas’ caddie, Jim “Bones” Mackay, and other members of his team on the Swilcan Bridge.

Woods, 46, is hoping for better results in the final major of the season than he had in the first two he played. He finished 47th at the Masters, his first official tournament start since he was seriously injured in a car wreck outside Los Angeles in February 2021. He posted scores of 6-over 78 in each of the last two rounds, representing his worst scores in his career at Augusta National.

At the PGA Championship at Southern Hills in May, Woods withdrew after 54 holes because of pain in his surgically repaired right leg. He carded a 9-over 79 in the third round, his worst score in a PGA Championship.

Woods skipped the US Open in June because of problems in his right leg. He had been aiming for The Open all year. Last week, he played two rounds in the JP McManus Pro-Am in Limerick, Ireland, tying for 39th at 7-over over 36 holes. He also played a practice round with Rory McIlroy at Ballybunion in Ireland on Thursday.

Thomas, who is playing in The Open at St. Andrews for the first time, said he tried to get some information from Woods, his close friend, on how to play the course.

“A little bit,” Thomas said. “I understand he’s going to be a little withholding of some information, but I’m trying to needle him and get as much off of him as I can because he’s done pretty well around this place.”

When Thomas was asked whether he had any doubts about Woods’ chances of contending again this week, he said, “Definitely not. I’ve learned better than to challenge anything about him.”