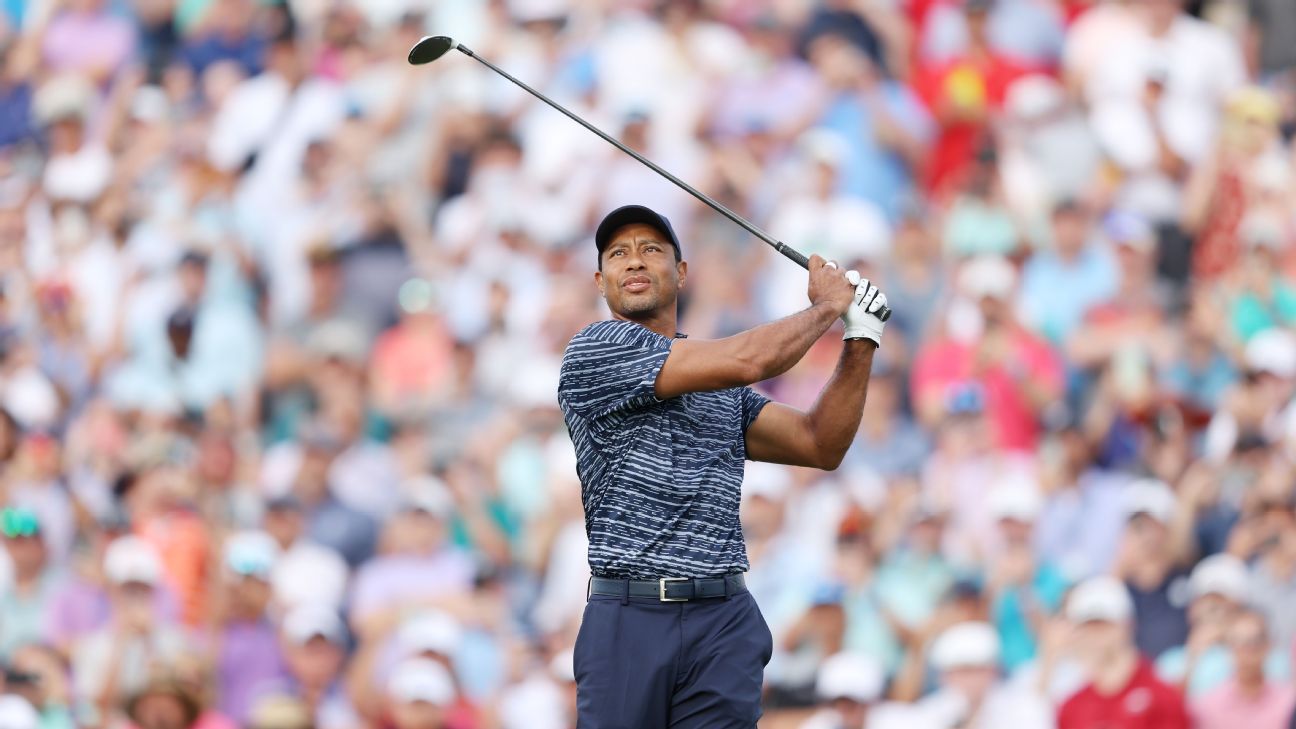 Tiger Woods wandering Southern Hills Country Club alone at the PGA Championship would attract interest. But for the first two rounds of the year’s second major, Woods will be in the marquee group of marquee groups — with Rory McIlroy and Jordan Spieth alongside him.

Woods enters the event admittedly stronger than he was a month ago at the Masters, where he made his return to competitive golf after 14 months away because of a single-car crash in February 2021 that nearly cost him his right leg.

So, can he contend? Woods has also said he doesn’t enter a tournament unless he thinks he can win.

We chart his every movement during the first round of the PGA Championship:

There are still 71 holes remaining, but the first hole of Woods’ PGA Championship could not have gone any better. He striped a 3-wood 339 yards, which, of course, came with a club twirl.

He then perfectly executed a little wedge from 95 yards to 3 feet. That putt was right in the center, and he began his tour around Southern Hills with a picture-perfect birdie.

Woods took a conservative approach on his second hole of the day, hitting a solid 8-iron into the middle of the green. He lagged his birdie putt up to kick-in range. Two holes in, and no drama so far.

The stinger made his first appearance at this PGA Championship. Woods drilled a low iron off the tee. Meanwhile, Spieth and McIlroy hit drivers. The difference? Woods’ tee shot traveled 273 yards; Spieth hammered his 328 yards and McIlroy pounded his 354 yards. From 195 yards, Woods controlled a perfect approach that never left the flag. Woods slammed his 20-footer for birdie through the break and had to settle for par.

First driver of the day from Woods looked as smooth as all the swings that preceded it. Woods unleashes one 353 yards down the left side. Again, though, he sat well behind the tee shots of Spieth and McIlroy, who both tried to get home in two at the par-5. Woods laid up to a comfortable yardage – he had 85 yards for his third shot – and then made a huge mistake. He airmailed a little wedge – virtually the same shot he stuffed at the first hole – into the back bunker.

That may be the worst wedge shot you’ll ever see Tiger hit. #LongAndWrong

Woods scrambled for by thanks to a perfect bunker shot. But given where he was after 2 shots, that was more stress than he wanted at the 13th.

During a long wait on the tee, Woods polished off a large sandwich that had social media buzzing.

Once the wait was over and the late breakfast was done, Woods stepped up and hit another crisp iron. He rolled home the 13-footer for his second birdie of the round. He isn’t the hottest player in his group, though. McIlroy dropped a 25-footer for his third birdie in a row.

Tiger Woods drops to 2 unders thanks to a long birdie putt on Hole 14.

Nothing about this hole went well for Woods. He tried to hit another stinger off the tee, but this one leaked right into the rough. The second shot tumbled into the front bunker. The blast from the sand sailed way too far. Two putts later and Woods walked away with his first bogey of the tournament. Meanwhile, McIlroy’s heater continued with a fourth consecutive birdie.

The last time Rory McIlroy had 4 birdies in a row in the opening round of a major? 2014 PGA Championship, his last major win.

Woods has always made sure to think his way around a golf course, especially at major championships. He knew what he was doing with his tee shot at the 16th, hitting a soft cut that stopped a few yards short of the fairway bunker. From there, he hit a safe iron to the middle of the green and two-putted for a par at the monstrously long par-4.

Sure, the 17th is the shortest par-4 on the course, but it had the players’ attention. Why? The wind picked up. “That’s as strong as it’s been,” McIlroy said to caddy Harry Diamond. Woods, after a safe stinger off the tee, had just 113 yards left. Normally, he would have been disappointed with what happened — a wedge that settled on the fringe, 15 feet from the hole. But with that wind, that approach was fine. One more revolution and the birdie putt would have dropped. Instead, it sat just off the edge.

Another good drive by Woods. But he was not happy with his second shot. Almost instantly after impact, he angrily swung his club backward and slammed it into the ground. He knew what was coming. The pull-hook on the approach bounded into the back bunker. To make matters worse – much worse – Woods appeared to limp more than he had all day as he walked up to the final green of this side. He hit an iffy bunker shot and came away with a bogey for an even-by first nine. But now all attention shifts to his health and how that surgically repaired leg will hold up.

Woods’ second nine didn’t start well. It’s never good when a tee shot comes to rest right behind a tree. With no other choice, he could not even try to hit the green. He laid up short and left, then hit an OK pitch into the green. But the end result was a second consecutive bogey and third in five holes. As strong as he looked at the start, Woods’ game has started to fall off as he has gotten deeper into his opening round. Plus, he heads to the second hole, his 11th of the day, 5 shots behind McIlroy, who is the leader.

There are two distinctly different things happening in this group: McIlroy is hot; Woods is fading. McIlroy rolled in another birdie, his fifth of the day, while Woods raced his birdie putt from a mile away 10 feet past the hole. Woods couldn’t convert and it was yet another bogey, his third in a row.

With just about everything going wrong, Woods desperately needed something good to happen. And it finally did. He split the fairway with his tee shot. The approach shot was even better. He controlled the trajectory and spin with the wind swirling, and the ball settled in 4 feet from the hole.