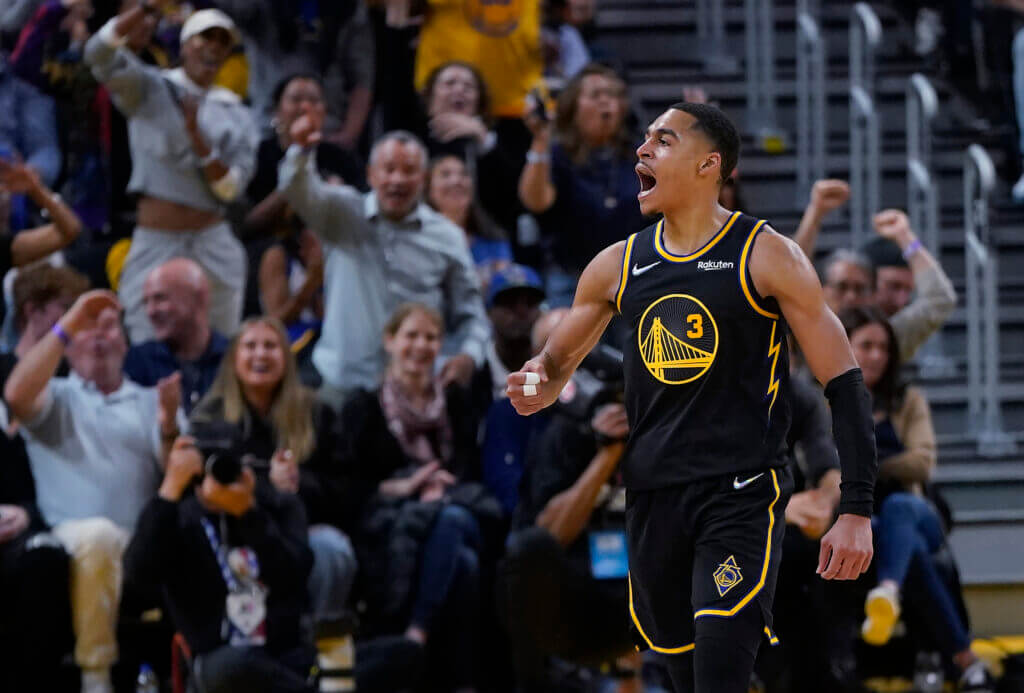 Jordan Poole smiled as he stared down at the iPhone 13 Pro Max in his hand. A sarcastic smile, as if he knew this was going to become the next attack on him.

He watched the video of the play midway through the fourth quarter when Memphis was intimating he intentionally tried to hurt Grizzlies star Ja Morant. He watched the slow-motion replay of the play where he and Andrew Wiggins trapped Morant, with Poole swiping and hitting the ball, then reaching again and grabbing Morant’s right knee. It showed him pulling Morant’s knee toward him with his right hand while pushing Morant with his left.

“Yeah, it was a basketball play when we doubled him,” Poole said after seeing it, “and I hit the ball and I was going for the ball. I mean, obviously, you don’t want to see anybody get hurt. I’m not even that type of player. I respect everybody. … Hopefully, he gets better, and we can see him out there next game. I don’t even play like that, for real. That’s not my type of game.”

Maybe Morant tweaked his knee when he planted on the trap. Maybe Morant hurt his knee earlier in the third quarter on a lunging contest on a Klay Thompson 3-pointer. Whatever the case, Poole and Morant are now intrinsically connected in this Western Conference second-round series, which the Warriors lead, 2-1, after Saturday’s 142-112 win at Chase Center. Morant began the link by attacking Poole relentlessly down the stretch of Game 2 and made Poole fall like he was praise dancing. And Poole responded — as you knew he would — by going right back at Morant in Game 3.

It all turned up another notch when Morant limped off the court. He looked dejected as he tore the cushion off the seat next to him and slammed it in frustration. He looked in great pain as the athletic trainer prodded his right knee. It’s the same knee that kept him out of nine games down the stretch. Then Memphis coach Taylor Jenkins said he was “curious” about what Poole was doing. Then Morant tweeted “broke the code” above the video Poole watched, a reference to Warriors coach Steve Kerr’s contention that Grizzlies guard Dillon Brooks “broke the code” when he hit Gary Payton II in the head from behind on a fast break.

Now it’s a full-blown controversy with Poole and Morant at the center.

“That’s playoff talk,” Thompson said. “Me, personally, I’ve been through a tough knee injury, and I don’t think there’s any malicious intent from Jordan. I don’t even think he’s strong enough to affect somebody’s knee. But we’re not out there trying to hurt people or trying to club people in the back of the head on a fast break. We play the game the right way, and I’m going to have his back. He’s not out to—no.”

From what we know of Poole, he certainly doesn’t want Morant out of the series. He wants the measuring stick of Morant’s greatness.

Poole sat for three days while the focus of the series shifted to his defense, or lack thereof. The highlights and memes got good run out of Morant dropping Poole, one of his many jaw-dropping plays as he scored 47 points in Game 2.

“It’s basketball,” Poole said. “We go out there. We play hard. We compete. These are the best players in the world, you know what I’m saying? So just going out there, just playing hard, stick to our game plan, shrug it off, keep pushing, come back the next day, go to the drawing board and just try to get better.”

His attempt at humility aside, Poole — who is but two months older than Morant and was taken 26 picks after the Grizzlies star in the 2019 NBA Draft — was simply not going to let that be the end of the story. Poole made it here, from the bust label chasing him back in 2019 to an essential member of a championship run because believes he belongs among the greats. He isn’t stopping Morant, who scored 34 points on 13-of-21 shooting with seven assists. But Poole was bent on proving that Morant had no chance of stopping him. No one on the Grizzlies fared well Saturday.

Poole is enemy No. 2 now in Memphis. Maybe he even passed Draymond Green now that he’s being blamed for injuring Morant. Some in Grizzlies nation were already hoping Poole would be suspended for Game 3 for walking on the court when Payton went down. Now, there will certainly be wails for him to be ousted for Game 4.

It makes perfect sense, too, because Poole is a big problem for the Grizzlies. And he’s the Warriors’ primary option for making Morant work on defense.

The Warriors had weathered Memphis’ hot start and had taken a lead in the second quarter. Morant, the Grizzlies’ unstoppable third-year guard, checked back into the game with 9 minutes, 36 seconds left in the first half. In Game 1, Morant ended his rest with 5:38 left in the second quarter. He returned at the 7:40 mark in Game 2. But the Warriors had run off eight straight points, sparked by a Thompson 3-point play. The Grizzlies’ lead, once at 13 points, was a six-point deficit some nine minutes later. So even with Warriors star guard Stephen Curry still on the bench, Morant returned to right the ship.

But this portion of the game belongs to Poole. When Curry sits to start the second and fourth quarters, the offense belongs to the Warriors’ third-year guard for six or so minutes. And he welcomed Morant to the Poole party by pulling him out to the deep end.

Morant set up De’Anthony Melton for a layup. Poole responded by hunting Morant, calling for a screen to get the face of the Grizzlies to defend him. And Poole went straight at him, using a hesitation and a step-back to get to a pull-up baseline jumper. The next time, he called out Morant again, this time going to work from the top and drilling a pull-up over Morant at the free-throw line.

The Warriors outscored the Grizzlies by 10 points in the minutes while Curry sat in the second quarter. The game changed with Poole going at Morant and putting constant pressure on the Memphis defense. The Warriors are plus-26 in the non-Curry minutes in this series.

Like every defense, the Grizzles are focused on taking Curry away. With Brooks ejected in Game 2 and suspended for Game 3, the Grizzlies have turned to Melton and rookie Ziaire Williams to essentially face-guard Curry and prevent his open looks. Backing them up is a Grizzlies big — whether Jaren Jackson Jr. or Wayne Willman or Brandon Clarke — waiting with the help if Curry makes a move.

But Poole gives the Warriors another player who can attack, another player who can run the pick-and-roll or even go to isolation. And with Thompson on the court with him, and the attention Curry draws, Poole has room to work. He can pull out his collection of crossovers and hesitation moves to get where he needs to go. He’s no Morant around the rim, but Poole’s layup package is cold in its own right.

“Jordan, just our ability to space the floor and get him going downhill,” Kerr said. “What he’s added to our team is so important. We’re able to put Steph on the bench and I would say for the series, we’re probably winning the non-Steph minutes, which is a big deal for us. Because for a long time, that’s been an issue.”

But what impressed Poole’s teammates was how he competed on defense. Green and a couple of veterans told Poole they needed more from him on the defensive end. They needed him to compete. If that means getting beat, so be it. If that means ending up in a Morant highlight, so be it.

“It’s going to keep happening,” said Curry, who knows something about being the target of the defense. “Whether it’s me, him, whoever. That’s the nature of the playoffs. But you just have to take that challenge seriously. You have to have some pride around it, knowing that they are trying to put you in the actions for a reason. That doesn’t mean you’re going to get a stop every time.

“It just means you did your job. First point of attack, be physical, don’t have any breakdowns. Whether they score or not, you just try and make them earn it and obviously not foul. I think he made the right adjustments and got to keep doing it because when playoff basketball slows down, those matches matter. And if you do your job on the ball, you have help behind you. More times than not, you’ll be in a good position.”

The controversial play that will dominate the talk about this series was a product of Poole competing on the defensive end. It isn’t the best look for Poole. He’ll be the center of attention again on the off days between games, especially if Morant misses any time.

But we know Poole. We know how he’s built and what he’s about. He wants Morant on the court. He wants to go right back at the superstar. Because that’s how he shows he belongs on this stage.