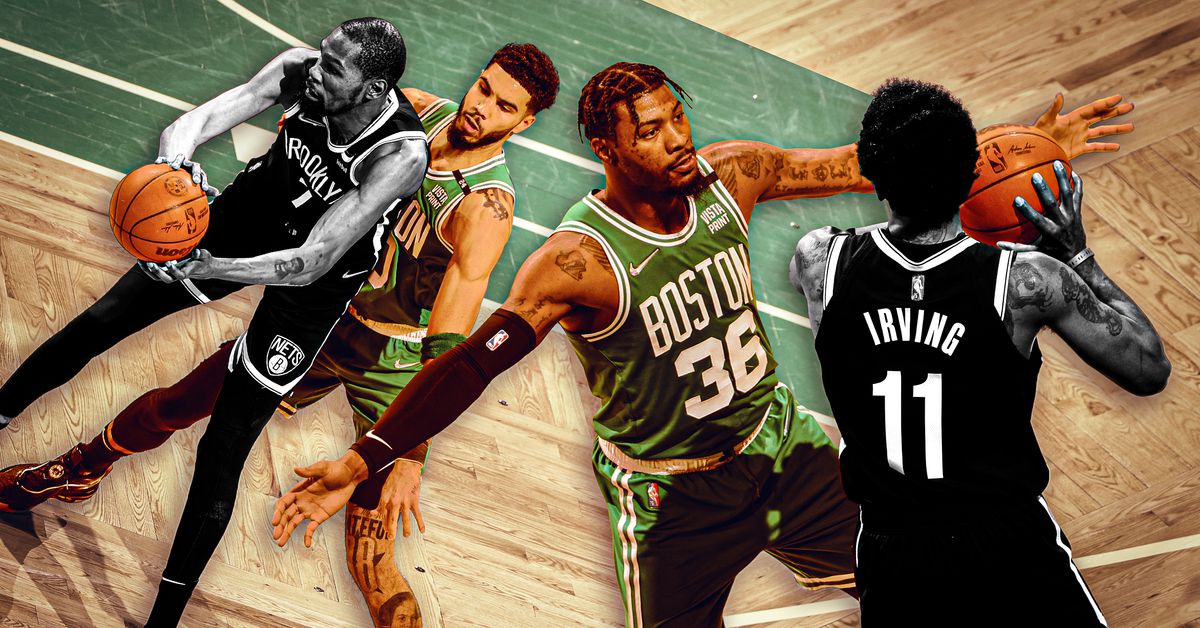 Marcus Smart arrived at TD Garden for Game 2 on Wednesday wearing a new piece of braggadocious attire: a dress with “DPOY” emblazoned on the back, to commemorate winning his first Defensive Player of the Year award.

Smart is an incredible individual defender: intelligent and tenacious, capable of switching to guard all five positions. But his honor was more emblematic of the team’s overall defensive chops, as the Celtics were the NBA’s stingiest team during the regular season. From January 1 onward, they allowed just 106.2 points per 100 possessions, according to Cleaning the Glass, more than three ticks ahead of the second-place Suns. Boston’s defense has not only stars—Smart, Al Horford, and the currently injured Robert Williams III—but depth, as every member of its playoff rotation is at least an average defender.

And in Game 2 against the Nets, that defense proved itself to be just as stingy in the postseason, putting the clamps on Kevin Durant, Kyrie Irving, and the Nets and holding them to just 42 points in the second half. The Celtics overcame a 17-point deficit to win 114-107, and now head to Brooklyn ahead 2-0 in the highly anticipated first-round matchup.

This was the Celtics’ theory of the case entering the postseason, and so far, it’s working precisely as planned. They weren’t afraid of the Nets, and now they’ve held serve on their home court; they thought they could defend anyone, and now they’re shutting down one of the greatest individual scorers in league history.

Facing rangy traps, active hands, and waves of defenders hounding his handle, Durant didn’t make a single field goal in the second half of Game 2. Overall, he shot just 4-of-17 from the field, and through two games , the former MVP has only 13 field goal makes versus 12 turnovers, on 32 percent shooting. (To be fair, he’s added 22 free throws, too.)

This isn’t a case of the Celtics’ defense being so committed to stopping Durant that it’s ceding open lanes to all his teammates. Irving followed up a scorching Game 1 effort with just 10 points and one assist in 40 minutes Wednesday, including just one made shot in the second half.

And in another great sign for the Celtics, they won Game 2 even though the Nets’ supporting cast stepped up with the stars scuffling. Bruce Brown scored a playoff-career-high 23 points. A resurgent Goran Dragic added 18 off the bench. Seth Curry tallied 16, including four made 3-pointers. The Nets can’t really ask for anything more from their role players—and they still blew a big lead, dropping a second winnable game in a row.

Boston’s defense continues to force the Nets to take mostly terribly difficult field goal attempts. The Nets’ shot quality in Game 2—or their expected effective field goal percentage, based on factors like shot location and defender distance—was just 44.7 percent, according to Second Spectrum. That’s the worst single-game figure for any team in the playoffs since the Spurs in the 2018-19 first round.

The Nets didn’t see much better looks in Game 1, either. Their overall shot quality against the Celtics this round is just 46.8 percent, the lowest for any team in these playoffs. In the regular season, for context, no team in the league had a shot quality below 50 percent.

Shot quality doesn’t necessarily dictate results like it did in the early days of 3s-and-layups optimization, and the Nets, with all their pinpoint midrange shooters, are a prime example of how teams can overcome such poor distribution. Their current eFG% in this series is 56.8 percent, 10 ticks higher than expectation.

But at such extremes, the math advantage really matters—and on the other end, the Celtics’ offense has a shot quality of 55.7 percent through two games. That’s the highest figure for any team in the postseason, and it’s higher than any team’s regular-season mark, too.

In other words, through two games, Boston is getting better shots than any other team in the league, and the Nets are getting worse shots than every other team. Of course the Celtics are leading the series with that kind of disparity—if anything, it speaks to the Nets’ immense talent that both games have even been close.

Back home for games 3 and 4, the Nets have to try to close that gap by taking more efficient shots, either at the rim or behind the 3-point line. The former will be hard to accomplish: With its two-big defense, Boston is one of the league’s most dominant teams around the basket. But the Celtics typically allow a decent share of 3-pointers, and the Nets haven’t taken advantage yet.

Through two games, only 29 percent of Brooklyn’s shots have been 3-pointers, which represents an extreme anomaly in the modern NBA. For context, in this regular season, every team took at least 33 percent of its shots from distance; the Nets were at 36 percent, which ranked 25th in the league. That’s a strange disconnect, given the team’s personal. Curry (42 percent on 3s this season), Irving (42), Patty Mills (40), and Durant (38) are all elite shooters, and the team is hitting 47 percent of its triples thus far in the series. They should let it fly more often.

More strategic changes might be coming soon, as well. Ben Simmons is reportedly targeting a Game 4 return, which would be his first time on the court since last postseason. Simmons, of course, would not help as a 3-point shooter by himself, but he could create better looks as a distributor, with the ability to drive and kick to his more perimeter-oriented teammates.

Simmons would provide more immediate help on the other end, where Brooklyn’s defense, as a contrast with Boston’s, lacks wing stoppers. Bruce Brown can guard only one of Jayson Tatum or Jaylen Brown at a time. But who guards the other? Durant, who already has to shoulder an exhausting offensive burden? Untested rookie Kessler Edwards, who recorded just three minutes in Game 2? Or a smaller guard who gives up size to Boston’s top scorers?

This series isn’t over yet. Simmons could return and make a difference. Boston’s role players might not play so well on the road as they did at home. (Good luck guessing when Grant Williams will score 17 points on just four field goal attempts again.) Brooklyn could help its defense with crisper offense, by cutting down on sloppy turnovers and preventing the runouts that Boston enjoyed in the second half of Game 2.

But trailing 2-0, the Nets need to win four games in five tries to advance—and the Celtics haven’t lost four in a five-game stretch since December, before they flipped the switch and emerged as a leading title contender. Now, the Celtics look every bit the favorite the computers believed they were back in early March. Their rotation is sturdy. They can play big and small, fast and slow. And their defense remains dominant, ready to clog the scoring lanes for all opponents from now through June.