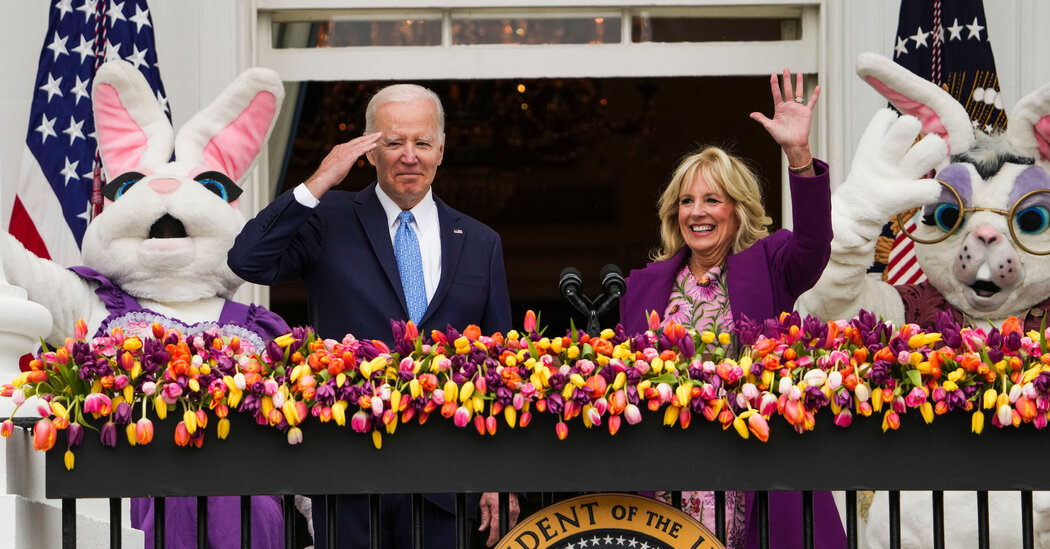 WASHINGTON — The last time the White House held an Easter Egg Roll, the president ditched the Easter bunny and briefed a child on his border wall. Phrases like “masking ordinance” and “rapid testing” were not yet part of the national lexicon. A Corona was just a beer.

The world has changed in untold ways since 2019, the last time 100,000 eggs were wildly bunted down the South Lawn. President Biden spent his first year in office forgoing most of the traditional events that can help blunt the daily stress of being commander in chief. But on Monday, the patter of rain was the only interference as the president and Jill Biden, the first lady, hosted the first Egg Roll since the beginning of the coronavirus pandemic, the largest event held at the White House since they moved in.

“This year, we’re finally getting together again, and it’s so special,” Mr. Biden said from the White House balcony, flanked by the first lady and the Easter bunny. “It means so much to see and hear the children and all the families show up to be here today.”

The coronavirus seemed like a distant concern despite numerous cases this month among members of the administration and Democrats on Capitol Hill. A number of aides who had tested positive in recent weeks were back in their offices. Some egg-rolling families who had been invited to the White House for breakfast were tested beforehand, though not everyone in attendance had been required to be tested, an official said.

About 30,000 people were issued tickets through a White House lottery available to the public, and they attended in time slots from 7:30 am until 6:30 pm On Monday morning, the attendees circulating on the lawn did not seem to mind the drizzly cold or the threat of Covid. Several members of the Biden family attended, including the president’s 2-year-old grandson, who Mr. Biden joked was still a little “startled” at the sight of a giant Easter bunny.

After greeting guests, the president came down from the balcony and performed his first official duty of the day: blowing the ceremonial whistle to start the Egg Roll race. (Mr. Biden had no other public events on his schedule, but he was to receive his daily briefing later in the afternoon.)

“Joe, you’re right in the middle of the egg,” Dr. Biden said to the president, who stood in the Egg Roll course just before he began one of the races.

But the commander in chief was in control. He blew the whistle and ran out of the way, dodging the flung eggs and pastel-dyed chaos.

Throngs of attendees made their way through several education-themed stations along the White House lawn.

“The determined spirit of education is what we wanted to honor in this Easter Egg Roll,” said Dr. Biden, who is an English professor at Northern Virginia Community College. “So we turned the South Lawn into a school community.”

At one station, children learned about the life cycle of an egg as it made its way from hen to home. In a nearby tent, a chef prepared to deliver a cooking demonstration next to a miniature White House made of 1,500 meringue macarons. The “Tonight Show” host Jimmy Fallon, the singer Ciara, the Broadway actress Kristin Chenoweth and a few “Sesame Street” characters were on hand at different spots.

At another station, children searched for some of the 100,000 eggs that had been hand-dyed and donated to the White House by farmers with the American Egg Board, one of the event’s oldest sponsors. Leftover quiche, sandwiches and cookies decorated with images of Commander and Willow, the White House pets, would be donated to a local food pantry, officials said.

“It’s just a chance for us to come out and promote eggs,” said Andy Seger, a farmer from Dubois, Ind., who brought his four children to the event. “It’s been two long years.”

For Stephen Durfee, a California-based chef who spent his day overseeing the meringue-crafted White House, the highlight was seeing the Bidens up close for the first time. He said he had met Dr. Biden earlier in the day and was able to ask her a few questions, including about her favorite room in the White House. (It was the Blue Room.)

The Egg Roll was the second major event held on the lawn in recent weeks: The White House opened the gates to visitors for garden tours this month. Tours of the interior of the White House resumed on Friday and are scheduled to take place weekly.

Stewart D. McLaurin, the president of the White House Historical Association, said that the return of the Egg Roll was a hopeful sign that the Biden administration would continue to open the White House to visitors.

“It’s the largest event that will be held at the White House in any given year,” he said. “We haven’t had this event in the last two years. We were very eager for this to take place and for that accessibility to resume.”

Carlos Elizondo, the White House social secretary, said that the first family was “looking forward to hosting more events in the coming months and sharing the White House with the American people.”

Mr. McLaurin said that he could tell that public interest in the Egg Roll had increased as coronavirus restrictions relaxed. This year, he said, the White House Historical Association sold out of the 50,000 hand-tooled wooden eggs that commemorate the event each year.

This year’s eggs featured the White House pets and the signatures of the president and the first lady. Each child received a commemorative wooden egg to take home.

Mr. McLaurin said that the association spent about $750,000 each year on the Easter Egg Roll, and that it planned to order as many as 80,000 wooden eggs for next year’s event.

“It’s quite an elaborate process,” he said.