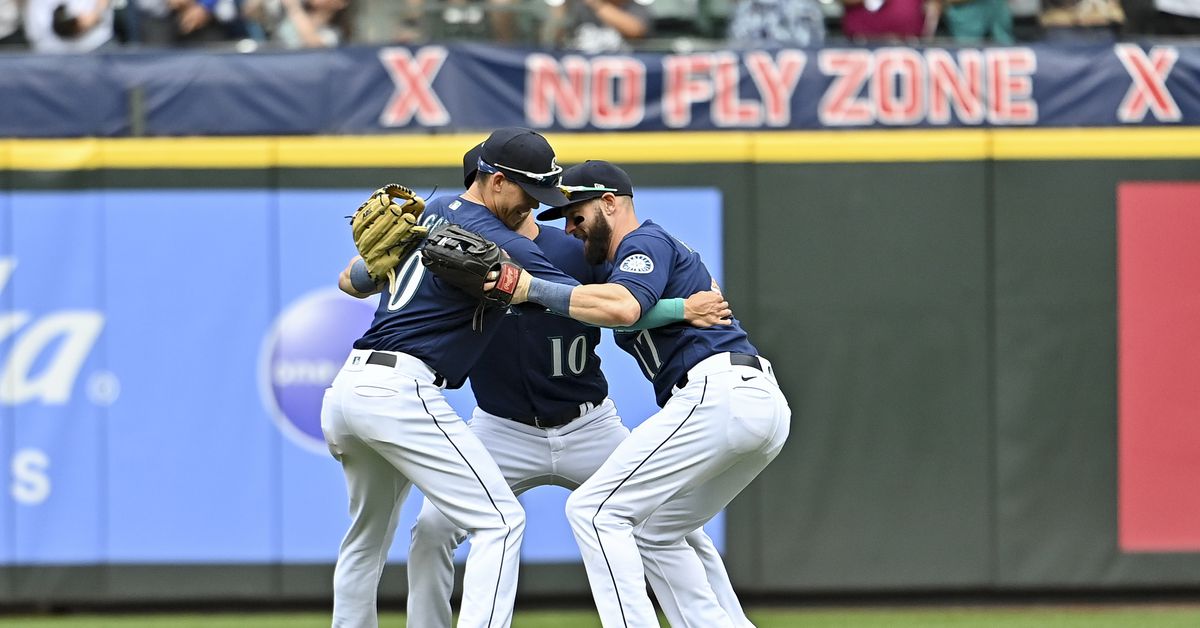 When a team is doing well, it can often be a bit of a measuring stick for just how well they are doing when they play a team that is, at least on the surface, better. The Yankees now sit with the second best record in the AL, half a game back from the ‘Stros (pending their game later tonight), and have arguably the best player in baseball right now in Aaron Judge, who had a monstrous league-leading 7.1 fWAR coming into tonight’s game. The Seattle Mariners beat those Yankees tonight 4-3, winning the game and the series, and finish with a 4-2 record against them in the season series.

To beat a team like the Yankees you need to have your team show up in full, and bring their best. Yesterday’s game was the perfect example. Electric, lock-down pitching was only one part of the recipe. It wasn’t until the bottom of the thirteenth inning, when the offense finally showed up in a real way, did the batter become complete enough for the Yankees to watch the Mariners rise above them in walk-off fashion.

But that was last night’s game, and after the late inning heroics, the Mariners would have to dig deep today. The pitching, the offense, the defense. They all needed to show up. For the most part, that’s what Robbie Ray did. If you look at his pitching chart above, it’s not the prettiest. That is reflected in some of his stat line, as he ended up issuing five walks in total, at times obviously pitching very carefully around some of the Yankees most potent hitters (Judge in particular), and not getting them to chase like he would have wanted.

All in all, it wasn’t a terrible strategy. Through six scoreless innings he kept New York limited to only two singles in the second, and struck out seven. It was a boon as Seattle needed him to go deep, with a spent bullpen. That’s why even though he was already at 96 pitches, he came out to work the seventh. He had been effective, and New York was sending up their 7-8-9 hitters. It started out well enough, with him able to get Miguel Andújar to ground out on four pitches.

When Isiah Kiner-Falefa came up next, Ray’s luck started to turn. He wasn’t gassed, as he was still reaching 94, 95 with his fastballs, but he just wasn’t fooling anyone. Kiner-Falefa turned an 0-2 count around into a walk. Then backup catcher Kyle Higashioka sent a 3-2 two-seamer at the edge of the zone over the fence in left-center, giving the Yankees a 2-1 lead. That finished Ray’s night at 115 pitches, 61 for strikes, five walks, seven strike outs, and two earned runs on only three hits. Penn Murfee came in for relief, and after getting LeMahieu to fly out, Aaron Judge only needed the first pitch to do what Aaron Judge does best and hit it into the bleachers and expand the Yankees lead even further to 3-1.

The Yankees had taken the lead in the top of the seventh, chasing Ray, but they weren’t the first on the scoreboard. It was no easy task for the Mariners to score first though, as opposing pitcher Nestor Cortes was absolutely locked in. Cortes was working a no-hitter into the sixth inning, and MLB was putting baseball fans on notice across their websites and social media. After last night’s starting pitching duel, it was both glorious and despairing to watch a repeat of stellar pitching and toothless offense for the second game in a row. Cortes had struck out eight batters going into the sixth inning, and finished with ten on the night, generating a whopping 18 whiffs, or 38% of all pitches thrown.

Maybe it was because he had already struck out Haggerty once in the game that he wasn’t worried about him in the sixth. Maybe he simply forgot about the fact that his team intentionally walked Haggerty twice the night before because of the threat he was proving to be. Or maybe working a no-no elevated his confidence, and maybe his hubris. Whatever the reason, when he hung a 93.9 MPH fastball well in the zone, it was all Sam needed to send it 105 MPH off of the bat over the left field wall, his fourth homer of the year.

It is entirely possible, even likely, that Sam Haggerty will regress. For now, he is earning that folk hero status. Across ninety-six at-bats, he now has the highest OPS on the Seattle Mariners. Period. Active or injured, qualified or small sample sizes, he leads them all with a .911. That OPS is higher than any of the Yankees lineup tonight that was not named Aaron Judge. His .323 average is better than any of those same Yankees, this time with Judge included. Ham Swaggerty, indeed.

I mentioned earlier though that it would take a team showing up in full to beat a team like the Yankees, and the runs they scored at the top of the seventh proved that. Keeping one of the league’s best offenses to only three runs and four hits would not be enough to win with only a few heroes. I’ve said it this season before, and I will keep saying it until it is no longer true. The Seattle Mariners are a team made up of heroes.

It’s true, sometimes heroes lose. Going into the bottom of the seventh, the Mariners offense was losing against Cortes with the exception of that lone Haggerty home run. They would lose no more. Ty France led off the inning with a single to right field, bringing up Mitch Haniger. After Higashioka let a passed ball ricochet off his gear, Ty France advanced to second. Mitch Haniger, beloved Mitch Haniger who looked like he never left, recognized his hero moment. He hit a sharp liner to left field for a single, and brought France home to put the Mariners within one run.

Again I say, a few heroes will not beat a team like the Yankees. They would need a few more runs to get the lead, and they would need a thin bullpen to maintain it for two more innings. After the Haniger RBI, the Yankees decided to go with a fresh arm in Albert Abreu. It worked to get the first out of the inning, as he struck out Eugenio Suárez, who has been a bit cold as of late. It looked like their plan might work as next up was Carlos Santana. If Eugenio has been cold, then lately Santana has been arctic. But when the odds are down, heroes step up. Carlos Santana, Slamtana to his foes, did just that, when he hit a bomb to right field for the two-run go ahead homer.

Speaking of heroics, enter the Seattle Mariners bullpen. Diego Castillo, his first day back from the IL, came in and worked a scoreless eighth, facing the minimum and striking out Gleyber Torres. In the ninth, it was Paul Sewald who was tabbed to preserve the lead, facing the bottom of the Yankees order. He too faced the minimum and went scoreless, striking out Benintendi, and inducing playable contact to secure his 15th save of the season.

Games like tonight’s and series like this one, have a different feel to them. With less than two months left of play, they can feel like previews, or even tests, for what the post-season may hold, or if a team is good enough to even get there. Today, Seattle faced pressure, deficits, and overcame them. The Seattle Mariners passed that test with flying colors, proving they can go toe-to-toe with one of the best teams in baseball.