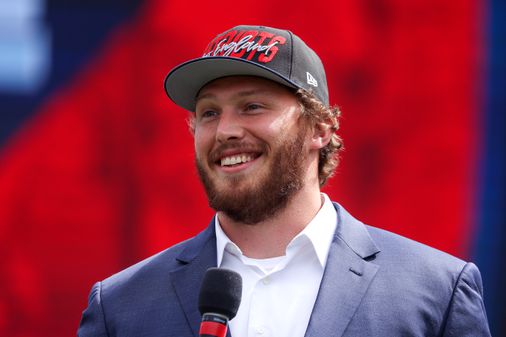 ESPN’s Mel Kiper gave the Patriots a C+, tying them with the Cowboys for his lowest ranking.

Delivering exclusive analysis and commentary on the Patriots and the NFL right to your inbox, three times a week during the season.

“Are we allowed to question a draft from Bill Belichick?” Kiper wrote. “Value matters in the draft.”

He didn’t think Strange deserved to be a first-round pick, and said Thornton wasn’t among his top 25 receivers, as “he needs a lot of work on his all-around game.”

Kiper’s ESPN colleague, Swampscott native Todd McShay, was a little more diplomatic, but still called it a “confusing” draft, with Strange as a “reach.”

Chad Reuter of NFL.com gave the Patriots a C+, ahead of only the Colts, who got a C.

Immediate draft grades are a little silly. No one really knows how the prospects will pan out, and Belichick could be right about Strange, Thornton and the other picks.

But the grades are noteworthy because the experts, particularly official league partners from ESPN and NFL.com, rarely criticize a draft. Almost everyone gets an A or a B just for participating.

But the Patriots are getting ripped to shreds, and Belichick is not getting any benefit of the doubt.

A few other notes from draft weekend:

▪ The analytics crowd hates the Patriots’ draft, too. One chart making the rounds across social media compared the difference in a team’s actual draft capital vs. expected draft capital vs. the consensus ranking of prospects — basically a statistical look at which teams matched their picks most closely with the consensus of all the major draft experts.

The Patriots fared the worst by a mile. Nine of their 10 picks were considered a “reach,” with Thornton and fourth-round cornerback Jack Jones over-drafted, each by more than 100 spots.

Again, no one knows how these players are going to turn out. But given the information we have now, everyone seems to hate the Patriots’ draft.

▪ Let’s be positive for a moment. My favorite pick of the weekend: Fourth-round quarterback Bailey Zappe from Western Kentucky. I have no idea if he’s any good, but I love the idea of ​​picking a quarterback in the middle rounds. Zappe was the fifth quarterback taken off the board.

The Patriots may have found their quarterback franchise in Mac Jones, but you can never have enough at the most important position in sports. The Packers used to have a rule of drafting a quarterback every year, even when they had Brett Favre. It helped them find Kurt Warner and Matt Hasselbeck, in addition to drafting Aaron Rodgers. The Packers’ longtime GM was Ron Wolf, whose son, Eliot, is in the Patriots’ front office.

Ideally, Zappe can show enough this year or next to be the primary backup. And if Zappe can nip at Jones’s heels and make him feel uncomfortable, all the better.

Jones had a solid rookie season, but the last thing the Patriots want is for Jones to become complacent or feel like he has a tenured seat as the starter. The Patriots didn’t draft Zappe to compete with Jones, but ask Drew Bledsoe how comfortable he felt with some sixth-round kid impressing the coaches in practice every day.

▪ Thornton, out of Baylor, seems to go against most of the Patriots’ scouting tendencies at receiver. They rarely take the 40-yard dash into account and instead prioritize the 3-cone drill. But Thornton was an absolute burner in the 40 — his 4.28 was the third-highest at the Combine and first among receivers — but his 3-cone time was a dreadful 7.25.

Thornton stands 6-2 and 180 pounds, and PFF is not a fan of his ability to break tackles, noting that he averaged 3.9 yards after the catch and broke just 11 tackles on 143 career receptions. But Greg Cosell, the film guru at NFL Films, said Thornton “was competitively tough and gritty,” called him “the most vertically explosive receiver in the draft,” and said he has “a physical dimension to his game even though he’s 181 pounds .” As a speed burner on the outside, Thornton is probably a replacement for Nelson Agholor, whether it’s this year or next year.

▪ A little surprised the Patriots didn’t draft any linebackers, but my jaw didn’t drop to the floor or anything. The traditional linebacker spot is simply not as important a position in today’s NFL, and the Patriots, like most teams, have a bunch of oversized safeties manning the position.

Between safeties Kyle Dugger, Adrian Phillips and Jabrill Peppers, plus linebackers Matthew Judon, Ja’Whaun Bentley, and a bunch of unproven players, the Patriots probably have enough at linebacker this year. It wouldn’t surprise me if the Patriots brought back Dont’a Hightower for one more year, too.

But it’s surprising the Patriots didn’t do more to improve their run defense, which finished 25th last year in average gain allowed (4.5 yards per attempt). Their only draft pick in the front seven was defensive tackle Sam Roberts in the sixth round.

▪ The Patriots drafted two running backs on Day 3 — Pierre Strong, a lock to make the roster, and Kevin Harris, who has a good shot. The Patriots had one vacancy with the departure of Brandon Bolden, but there could be a numbers crunch. Rhamond Stevenson is a roster lock, and Damien Harris probably isn’t going anywhere since he is making league minimum this year.

JJ Taylor, active for just five games last season, could be on the way out. It also makes me wonder if James White, returning from a severe hip injury, might have to start the season on the Physically Unable to Perform list, which would keep him out at least six weeks.

Ben Volin can be reached at ben.volin@globe.com.