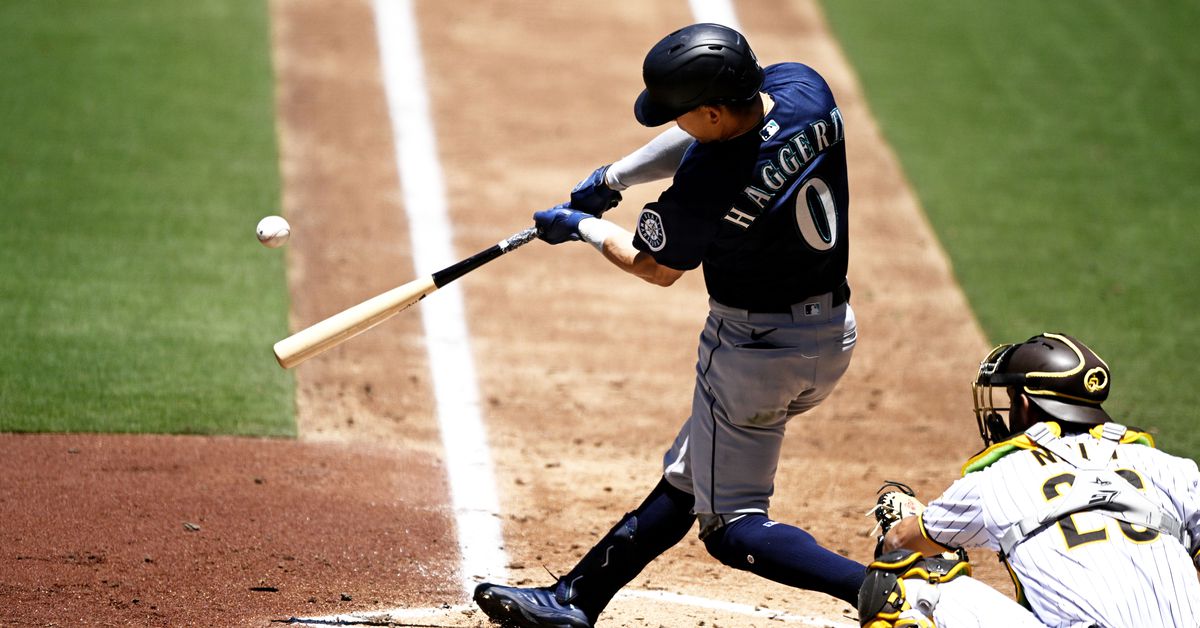 Yesterday was a day renowned as a holiday that features barbecues and explosive pageantry, and yesterday the Mariners did not disappoint in matching that theme. This season it has not been rare for the Mariners to occasionally light up like that. What is at the very least medium-rare this year is repeating those performances two days in a row. Fear not, for repeat they did, with a searing 6-2 victory today for the two game series sweep. It was the first series sweep in San Diego since 2015, and with them outscoring the Padres 14-4, it was well done. (Ignore the barbecue metaphors for that last bit, as according to an impromptu polling of the LL readership, and myself, the clearly superior cook is medium-rare).

Logan Gilbert had a perfectly acceptable night, allowing two runs, one earned, against six hits, three walks, and striking out one in 5.1 innings of performance. In a sense, he didn’t bring his usual heat. The velocity was definitely there, with him averaging 96.3 mph on his fastball, and reaching as high as 99.3. What wasn’t there was his usual strikeouts, and across his 101 pitches he only generated eight whiffs on forty-eight swings. To give some credit where it’s due however, his location was far from terrible, and he absolutely wasn’t getting calls he likely should have on the edge of the zone. Take this Jake Cronenworth at bat in the bottom of the third inning, for example.

Without much generosity at all, that should have been a strikeout. It occurred with two outs, and had undeniable consequences as it eventually led to Cronenworth scoring later in the inning to tie the game up at 1-1, after a fielding error from Frazier allowed Hosmer to reach base. No, Gilbert didn’t have his best stuff today. But what is absolutely refreshing about having LoGi on the mound is that he is a battler, and even when he is down he is not out. In the second inning he worked himself into a bases loaded jam with no outs, but he kept his head in the game and induced playable contact to get all three outs. Major props goes to the defense in those plays as well, which played a major factor in today’s victory overall.

Now, to the Sam Haggerty of it all. The reaction I saw to Haggerty and Dylan Moore both starting in the outfield was a collective sigh of trepidation, but at the end of the day Haggerty and Moore were the team leaders in WPA with .204 and .203 respectively. Sam Haggerty specifically had himself a career game, going 3-for-4 with a stolen base, and two runs beaten in, including a solo shot in the third inning that put the Mariners on the board first.

Here is his other RBI, when he brought Dylan Moore home from second on a single in the fourth inning.

He brought the Ham and he brought the Swagger. He also had some solid defensive plays in left field, flexing his speed and tracking balls down, and showing off some arm strength getting balls in quick and keeping runners from advancing. He did have one defensive faux pas on a play in the bottom of the sixth inning, and was a TOOTBLAN victim in the top of the seventh when a what should have been an easy out at first on a bunt instead generated a throwing error, that then turned into an easy out at third when he blew past second base.

All in all though, a solid day from number zero, and all is forgiven for any mistakes made. Small sample size of course, but he now has a .303 average and .828 OPS on the season, with a 0.3 bWAR in thirty-one plate appearances.

What made today’s win such a comfortable one though was that the offense really is heating up from top to bottom in the lineup. The pitching of course has been near elite lately, and the bullpen has recovered nicely after some early woes, but none of that matters if they simply can’t score runs. All eyes have of course been on Julio Rodríguez lately as he continues to make his case for Rookie of the Year, and dare I say is even working his way into the MVP conversation. Tonight, he went 2-for-5 with three strikeouts, coming across to score once and driving in zero RBIs. Even when he is “bad”, he’s still good.

But tonight everyone got on base except Abraham Toro and Eugenio Suárez, it wasn’t just the J-Rod Show. JP Crawford, Dylan Moore, and Sam Haggerty had two RBIs apiece. Dylan Moore in particular had a 2-for-3 night with a walk and a lone strikeout. JP Crawford’s two runs batted in came in the top of the ninth on his second triple of the season.

It was JP’s second good game in a row after coming off of his suspension, which he has said he used as time to mentally reset. What initially looked to be a curse has turned into a blessing, especially if he keeps bringing the heat in the upcoming series against Toronto. Thanks, Angels!

Speaking of heating things up, how about Andrés Muñoz? He hasn’t given up an earned run in nine appearances, since allowing two from Boston on June 10th. Today he went 1.2 innings, giving up no hits and one walk, while striking out three, including a 102 mph beauty at the edge of the zone to get Machado swinging and ending the sixth inning with two runners on.

With tonight’s win it seems the Seattle Mariners may finally be doing what they have failed to do all season, consistently heating up in all of its parts to decisively win games. They are only one game under .500. Tomorrow they have an off-day, and after that a four game set against Toronto at home. Four games against a team that, at the time of this writing, are three games ahead of them in the wild card standings. They’ve been thoroughly seasoned with injury woes, roster shuffling, and other pesky inconsistencies. Now as we near the All Star Break though, they are perfectly primed to bring the sizzle and finally get this season cooking.