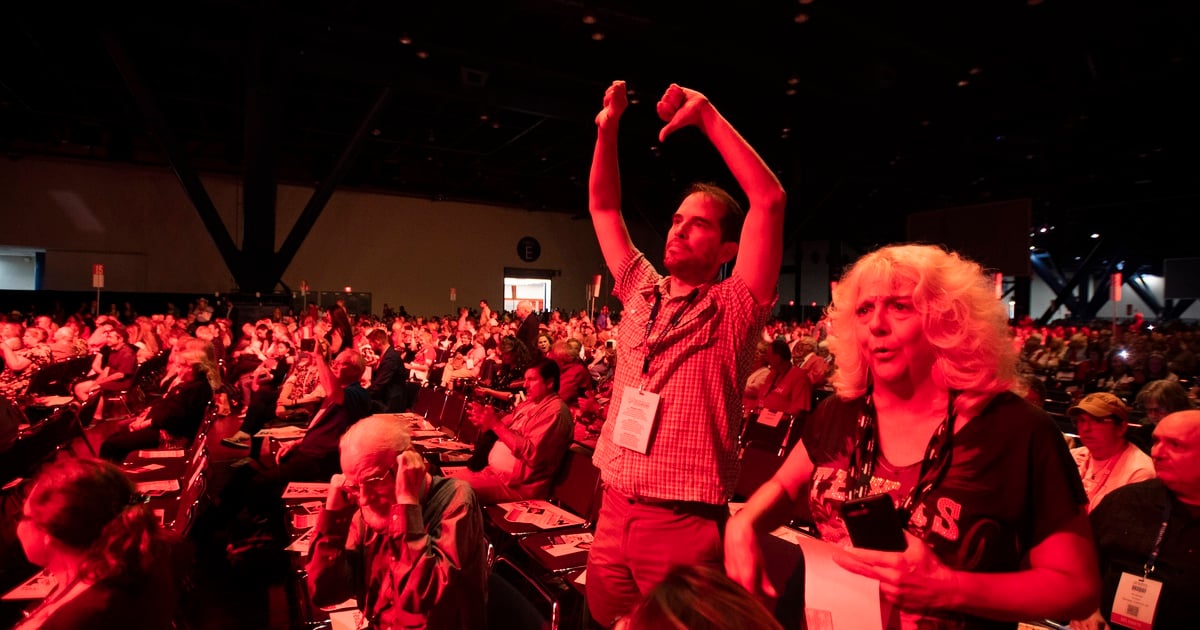 Sign up for The Brief, our daily newsletter that keeps readers up to speed on the most essential Texas news.

HOUSTON — Meeting at their first in-person convention since 2018, Texas Republicans on Saturday acted on a raft of resolutions and proposed platform changes to move their party even further to the right. They approved measures declaring that President Joe Biden “was not legitimately elected” and rebuking Sen. John Cornyn for taking part in bipartisan gun talks. They also voted on a platform that declares homosexuality “an abnormal lifestyle choice” and calls for Texas schoolchildren “to learn about the humanity of the preborn child.”

The actions capped a convention that highlighted how adamantly opposed the party’s most active and vocal members are to compromise with Democrats or moderating on social positions, even as the state has grown more diverse and Republicans’ margins in statewide elections have shrunk slightly in recent years.

Votes on the platform were collected at the end of the party’s three-day convention in which party activists moved to add multiple items to the official Texas GOP platform. As the convention closed, two separate sets of ballots — one allowing delegates to choose eight of 15 legislative priorities and another allowing delegates to vote on the 275 platform planks — were gathered. Those will now need to be tallied and certified in Austin, but it is rare for a plank to be rejected, according to party spokesperson James Wesolek.

The convention reinforced the extent to which former President Donald J. Trump’s unfounded claims of a stolen election continue to resound among the faithful party — even though his claims have repeatedly been debunked, including by many of his own former aides, and after a week of televised hearings about the Trump supporters who stormed the Capitol on Jan. 6, 2021.

The denunciation of Cornyn represented a remarkable rebuke to a Republican who has served in the Senate since 2002. The hall at the George R. Brown Convention Center in Houston filled with boos on Friday as he tried to explain the legislation, which would allow juvenile records to be incorporated into background checks for gun buyers younger than 21 and encourage “red flag” laws that would make it easier to remove guns from potentially dangerous people, along with more funding for school safety and mental health.

Meanwhile, the party platform vote on Saturday by roughly 5,100 convention delegates would argue that those under 21 are “most likely to need to defend themselves” and may need to quickly buy guns “in emergencies such as riots.” It also would say that red flag laws violate the due process rights of people who haven’t been convicted of a crime.

About 9,600 delegates and alternates were eligible to attend; organizers said turnover was a bit more than half that.

The new platform would call for:

Not every far-right proposal was advanced. The party chair, Matt Rinaldi, ruled that a motion to defend the due process rights of those who rioted at the Capitol on Jan. 6, 2021, and to “reject the narrative” that the riot was an insurrection was out of order and could not be voted on.

Taken together, the new provisions would represent a shift even further rightward for the Republican Party of Texas, once known as the party of Presidents George Bush and his son George W. Bush. Land Commissioner George P. Bush, a grandson and nephew of the two presidents, was handily defeated in May in his runoff race against Attorney General Ken Paxton, an arch-conservative who sued to challenge the 2020 election outcome and convinced voters that he was the truer Trump loyalist.

Party platforms are mission statements rather than legal doctrines and, in Texas, they have long reflected the opinions of the most activist wings of the parties. Republican elected officials are not bound to adhere to the platform, and party activists at times have expressed frustration that some parts of their platform and legislative priorities have not become law, despite complete Republican control of the state Legislature.

But the platforms are broad indicators of the sentiments of the most active Republican voters — those who dominate party primaries. Republicans have controlled every statewide elected office in Texas since 1999 and both houses of the Legislature since 2003, so the wishes of the party’s populist, pro-Trump base inevitably affect actions taken in Austin.

“The platform is largely symbolic but important as a measure of ideological drift,” said Brandon Rottinghaus, a political scientist at the University of Houston. “Party platforms are often used as a cudgel in party primaries. A more muscular ideological platform eventually leads to a more conservative legislature as challengers knock off more moderate members.”

The convention was noteworthy for the relatively low profile of top officeholders. Govt. Greg Abbott, who is seeking a third term in the November election, only appeared at a reception on Thursday on the sidelines of the convention. Lt. Gov. Dan Patrick, who effectively controls the state Senate, addressed the convention, but House Speaker Dade Phelan only spoke at a luncheon, not to the main body of delegates.

“A more aggressive party platform sends a clear message to politicians about where the base is going,” Rottinghaus said. “Donald Trump radicalized the party and accelerated the demands from the base. There simply aren’t limits now on what the base might ask for.”

Mark P. Jones, a political scientist at Rice University in Houston, said the 2022 platform indicated how emboldened hard-right party activists now feel — a far cry from 2020. Significant gains by Texas Democrats in state House elections in 2018 raised the prospect of the Republican Party losing its dominant status in Texas, making it moderate its platform in 2020 to focus on bread-and-butter issues. Texas Republicans did well in the 2020 elections — even though Biden won 46.5% of the Texas vote, the highest proportion for a Democrat since 1976 — and this year, culture-war issues were once again at front and center.

Jones said that Republican redistricting has made incumbents safer and less inclined to appeal to moderates. Moreover, inflation, the risk of a recession, the ongoing COVID-19 pandemic and growing acrimony over race, gender and sexuality make it seem increasingly likely that Democrats will lose the US House in the November midterm elections.

“As a result, the 2022 GOP feels free to veer to the right to its heart’s content, confident that it won’t come back to haunt the party in November, except perhaps in a half dozen races,” Jones said. “And even the party’s pragmatic center right conservatives lack the ability to argue, as they did successfully in 2020, that an ultra conservative platform could cost the GOP its majority status in the Lone Star State. This year, even the absolute worst case scenario has the GOP winning statewide, increasing its number of US House seats, boosting its Texas Senate majority by a seat, and maintaining the 83 seats it held in the 2021 Texas House.”

“They want to destroy the racial progress we have made by saying that we are a racist nation,” said Robin Armstrong, a Black doctor in Texas City who treated COVID patients with unapproved drug therapies touted by Trump, including hydroxychloroquine. “The Democratic Party is now a party of chaos. They benefit from causing us to question the foundations that this country was built upon. The misery, the crime, the drug abuse, the high gas prices are all by design, so that the Democratic Party can permanently transform society. We Texans cannot and we will not allow this to happen.”

The Republican-dominated Legislature last year passed new voting restrictions that prompted Democratic lawmakers to flee to Washington to break quorum in an ultimately futile protest. However, Republican leaders said repeatedly on Saturday that it was the other side that was a threat to make elections.

“The Democrats wants three things: Their goals are to steal elections, suppress Republican votes and federalize elections,” said Cindy Siegel, the chairperson of the Harris County GOP and a former mayor of Bellaire.

Immigration continued to be a major theme, with delegates lamenting Biden’s reversal of Trump-era border policies. US Rep. Jodey Arrington, of Lubbock, described an “unprecedented, unmitigated, self-inflicted disaster that is creating the worst humanitarian and national security threat to the American people in the history of our southern border,” adding, “this is an invasion, folks. ”

The mood of this convention was not hopeful. The themes ran dark, and activists spoke in apocalyptic, even cataclysmic, terms about the state of the country.

“Everything is topsy-turvy. What’s right is wrong and what’s wrong is right,” said state Sen. Donna Campbell, an emergency room doctor in New Braunfels, reflecting a state of uncertainty that is shared by Americans of many political backgrounds, even if they don’t agree on the causes. “Our country is on a trajectory to self-destruct, unless we change the direction.”

Campbell and other activists frequently spoke of their Christian faith.

“I believe that in the sovereignty of God, you and I were purposely born into this moment, into this confusing time that we face,” Campbell said. “We’re meant to be alive, at this time, right now, and here in this state.”

Disclosure: Rice University and University of Houston have been financial supporters of The Texas Tribune, a nonprofit, nonpartisan news organization that is funded in part by donations from members, foundations and corporate sponsors. Financial supporters play no role in the Tribune’s journalism. Find a complete list of them here.

Join us Sept. 22-24 in person in downtown Austin for The Texas Tribune Festival and experience 100+ conversation events featuring big names you know and others you should from the worlds of politics, public policy, the media and tech — all curated by The Texas Tribune’s award-winning journalists. Buy tickets.