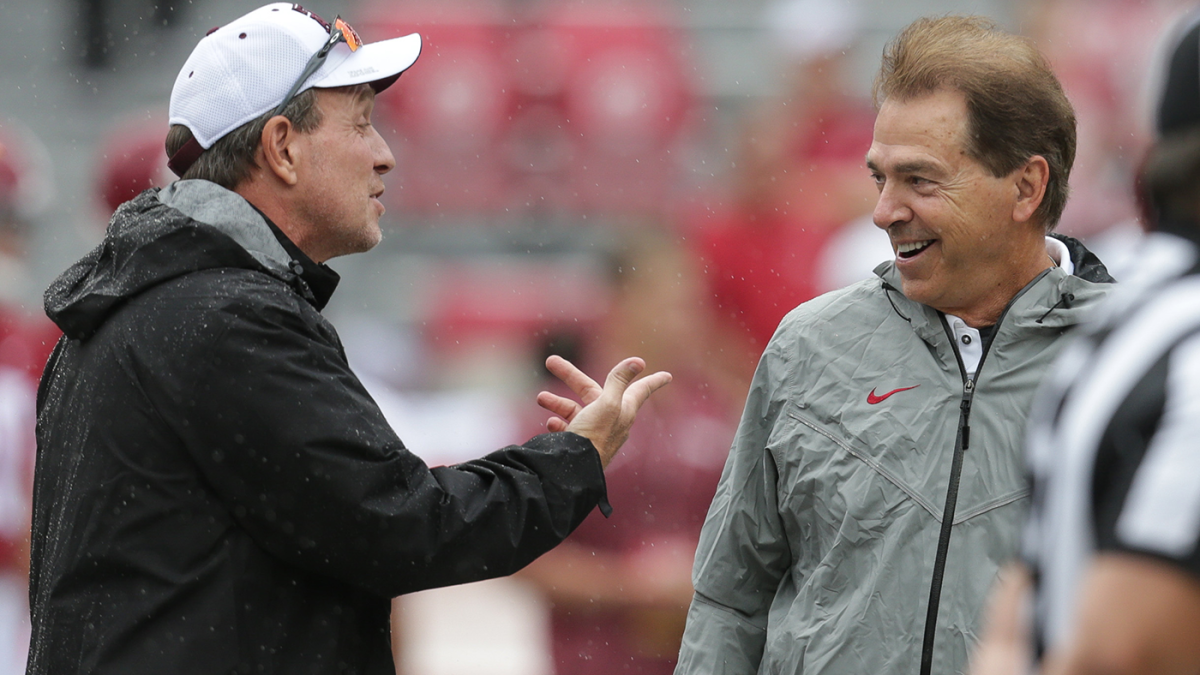 Texas A&M coach Jimbo Fisher fired back at Nick Saban on Thursday after the Alabama coach said Wednesday night that the Aggies”bought every player on their team” while discussing issues with name, image and likeness in college football. Saban’s remarks came during a wide-ranging answer on the state of the sport and recruiting amid the advent of NIL.

“It’s despicable that we have to sit here at this level of ball and say these things to defend the people of this organization, the kids, 17-year-old kids and their families,” Fisher said. “It’s amazing. Some people think they’re God. Go dig into how ‘God’ did his deal. You may find out about a lot of things you don’t want to know.

“We build him up to be the czar of football,” he continued. “Go dig into his past or anybody that’s ever coached with him. You can find out anything you want to find out, what he does and how he does it. It’s despicable; it really is.”

The Aggies landed the nation’s No. 1 ranked recruiting class in 2022, according to the 247Sports Composite, with Fisher signing more five-star prospects this cycle than in the rest of his Texas A&M career combined. Alabama’s class finished ranked No. 2, but Saban made it clear in his remarks Wednesday that he feels like the programs used different methods to land their talent.

“We didn’t buy one player,” said Saban, who also took aim at Jackson State landing No. 1 recruits Travis Hunter. “But I don’t know if we’re going to be able to sustain that in the future because more and more people are doing it.”

In response, Fisher quickly shot down any notion that the Aggies may have broken any rules or laws in landing their top-ranked class.

“You’re taking shots at 17-year-old kids and their families that they broke state laws, that we bought every player in this group,” Fisher said. “We never bought anybody. No rules were broken, nothing was done wrong. These families, it’s despicable that a reputable head coach can come out and say this when he doesn’t get his way or things don’t go his way.

“The narcissist in him doesn’t allow those things to happen. It’s ridiculous.”

This marks the second year in a row that the two coaches and former coworkers at LSU have traded verbal jabs during the offseason. Last year, Fisher vowed that Texas A&M would beat Alabama while Saban, 70, was still coaching. Saban shot back shortly by asking if Fisher meant he would beat Saban in golf. The Aggies followed through on Fisher’s pledge with a stunning 41-38 upset over the then-No. 1 Crimson Tide on Oct. 9, as Fisher became the first of Saban’s former assistants to beat him in a head-to-head matchup.

What was a light-hearted exchange, however, has turned into something far more heated and personal.

As for the relationship between Saban and Fisher, don’t expect a warm pregame embrace between the two before their teams play on Oct. 8 at Alabama. Fisher said Saban has called him but that he didn’t answer.

Both coaches are from small towns in West Virginia separated by about 20 miles, and they have shared similar rises to prominence in the sport. To be sure, Saban and Fisher have a shared history, but it became clear during Fisher’s press conference that he felt personally insulted by Saban’s suggestion that the Aggies program has been cheating.

“I’m going to tell you one thing,” Fisher said. “You can call me anything you want to call me. You ain’t calling me a cheat. I don’t cheat and I don’t lie. I learned that when I was a kid. If you did, your old man slapped you on the side of the head. [Saban].”

Fisher also went on the offensive, implying that Saban’s cheating accusations are projection. “The parity in college football that he’s talking about?” Fisher said. “Go talk to the coaches who’ve coached for him. You’ll find out all the parity. Go dig in to wherever he’s been. You can find out anything.”

Considering they’ve both inhabited the SEC for several years now, it’s a wonder it took this long for tension to spill over in such a public way. Given the sport’s shifting dynamics and the competition on the field and in recruiting between the two schools, that tension may just be the new normal in the SEC for however long Saban and Fisher remain in place.

“I don’t mind confrontation,” Fisher said. “I’ve lived with it my whole life. Kind of like it myself. Backing away from it wasn’t the way I was raised.”

There is also the possibility of intervention from the SEC in what is becoming the most high-profile squabble between league coaches in recent memory.

“That’s their job,” Fisher said of potential conference involvement. “That’s fine. I’m sure they [the SEC office] will. They’ll berate, say something. Move on, I guess. This is about our players, Texas A&M and the people who work here and the coaches here. That’s what this is about. Make no mistake: we’re not going anywhere. We still have a lot of work to do, we’re not where we want to be, but this is going to be a great program, and we’re building it into a great program.”

Ultimately, the lack of uniform guidance around recruiting in the NIL era with the advent of the one-time transfer rule has created chaos in a sport with high stakes. With the NCAA undergoing generational change, a void leadership has emerged that Fisher would like to see filled.

“I would like to find unified rules across this country to put things in place, that’s what I want,” Fisher said. “I don’t know what those are, I’m not smart enough to figure that out. I don’t know about anti-trust laws, all those bylaws, the government needs to step in.

“And what’s funny, in that talk right before he said that about us, wasn’t he soliciting funds from the crowd?” Fisher continued. “I guess when you walk on water it doesn’t matter.”