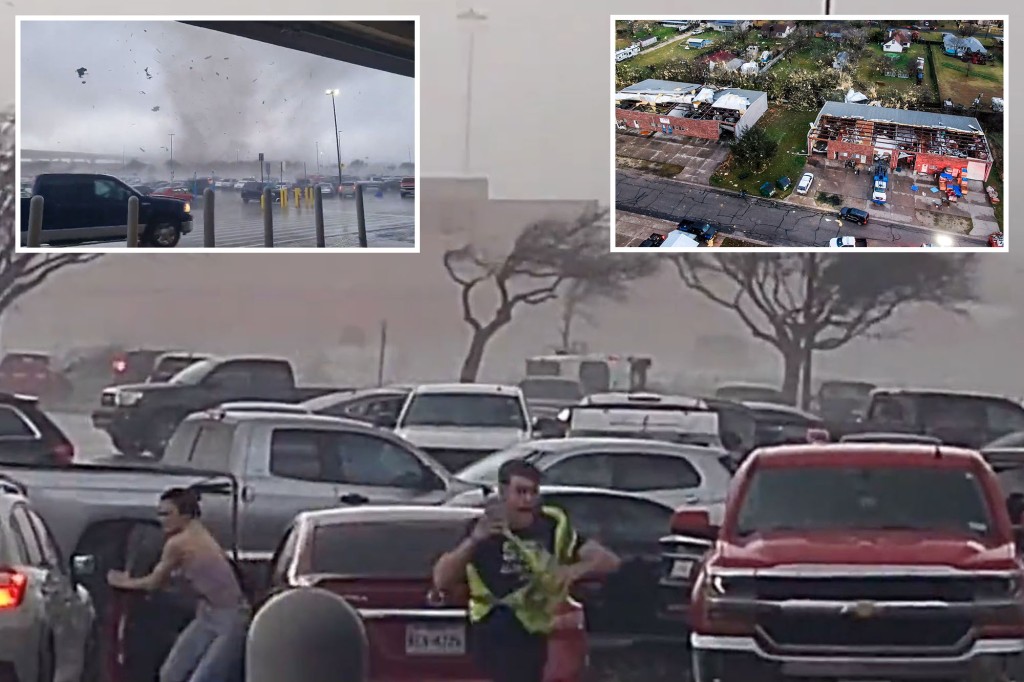 Terrifying video captured the moment a tornado ripped through a Walmart parking lot in Texas – as a man yells for terrified shoppers to run into the store to avoid the flying debris.

“Get inside! Get inside! Run! Run! Run!” the man screams at the entrance to the Walmart in Round Rock, a city near Austin, as the twister barreled in Monday evening. “Get away from the windows.”

The heart pounding footage was posted on Twitter by James Watson, an employee at the Walmart store.

A woman also posted images of her bleeding legs after the harrowing experience.

“I JUST GOT DRAGGED ACROSS THE MF WALMART PARKING LOT BY A TORNADO BITCH!!!!!” she wrote.

The tornado was one of several that swept through Texas and Oklahoma, leaving at least four people injured in the city of Elgin, east of Austin, USA Today reported.

A tornado hit down in Luling, between Austin and San Antonio, and another massive one hit an area east of Round Rock, near Taylor, according to the National Weather Service.

“I thought I was going to die,” said Michael Talamantez of Round Rock, whose house was destroyed on Stratford Drive after the tornado touched down, USA Today reported.

Multiple vehicles appeared to be severely damaged at the Kalahari Resort in Round Rock, KVUE stationary cameras showed.

Meanwhile, two schools in Jacksboro, just outside Dallas, were heavily damaged when a tornado tore through about 4 pm Monday, Fox 26 Houston reported.

Jacksboro High School Principal Starla Sanders said the roof to her home was ripped off.

“It just brought tears to my eyes. I have lived here for 15 years, and I love this place. It is hard,” she told the outlet.

“Haven’t seen, but I hear I don’t have a roof on my own house. My kids are safe, and my husband is safe and all the students are safe. That is what is important.”

In Oklahoma, a quarter-mile-wide tornado reportedly hit the southern city of Kingston around 6:30 pm, creating a nearly 1,300-foot-long path of destruction.