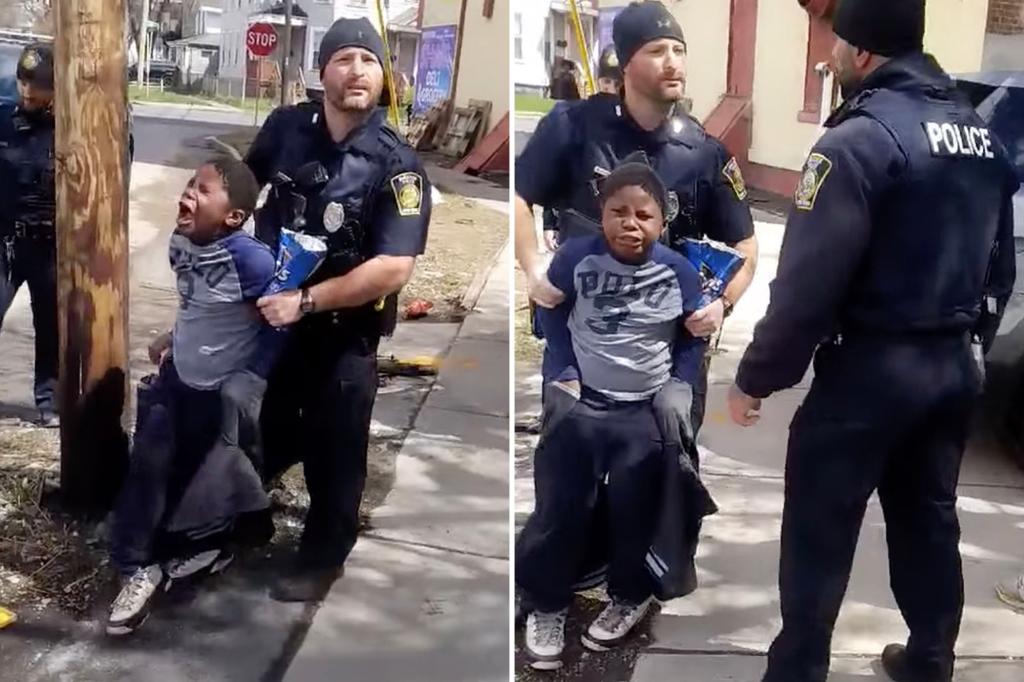 Syracuse police are under fire over a viral video that captured three white cops taking an 8-year-old black boy to a patrol car after he allegedly stole a bag of Doritos from a convenience store.

The footage shot by Kenneth Jackson and widely shared on social media shows the crying boy being detained by the officers on Sunday, the Post-Standard reported.

“What is y’all doing?” the bystander asks an officer holding the little boy by the arms.

“Guess. Take a guess what I’m doing,” the cop replies, but Jackson continues to question them.

“He looks like a baby to me. I don’t know what you’re doing. So what’s going on, then?” Jackson says.

Another officer tells him the boy “was stealing stuff.”

“Nah, man, so he’s stealing a bag of chips, you’re treating him like an old cold—– killer?” Jackson says, wearing at the officers as they put the child in the car.

The boy’s father, Anthony Weah, told the Post-Standard that police went to his home after the incident and told him his three boys were accused of stealing the chips.

Weah said the cops were friendly and didn’t press charges — but he was shocked when he saw the video on social media later.

“Why would the police treat that child like that? Over a $3 bag of chips,” Weah told the news outlet, adding that he wants to file a complaint against the police.

The dad, who is from Ethiopia, acknowledges that what his son did was wrong, but complained about the way the cops handled the incident, which is being investigated by the department.

“The policemen, they are not children. They are not boys, they’re men,” Weah told the paper.

Jackson told the outlet that he initially didn’t realize the person being detained was a child.

“He got snatched off that bike. The bike hit the ground and chips went everywhere,” he said. “It was just beyond me that they were actually treating this baby like this.”

Jackson added: “There’s other ways to rectify this besides scare tactics. Now that’s just another youth that’s scarred by the system.”

The incident was widely condemned on social media, where users called the police action a massive overreaction to a minor offence.

Some commentators pointed to the racial overtones because the boy is black and the officers are white.

Police said in a statement: “We are aware of a video being shared on social media involving several of our Officers and juveniles accused of stealing from a store on the City’s northside,” WTRF reported.

“The incident, including the Officers’ actions and body-worn cameras, are being reviewed. There is some misinformation involving this case. The juvenile suspected of larceny was not placed in handcuffs. He was placed in the rear of a patrol unit where he was directly brought home. Officers met with the child’s father and no charges were filed,” police added.

“The officer knew the child from prior interactions and explained to him that he was being taken home,” Walsh said, according to the outlet.

“The officers returned the child to his family and discussed the incident with his father before leaving without filing any charges,” he said.

“What occurred demonstrates the continuing need for the city to provide support to our children and families and to invest in alternative response options to assist our officers,” Walsh added.