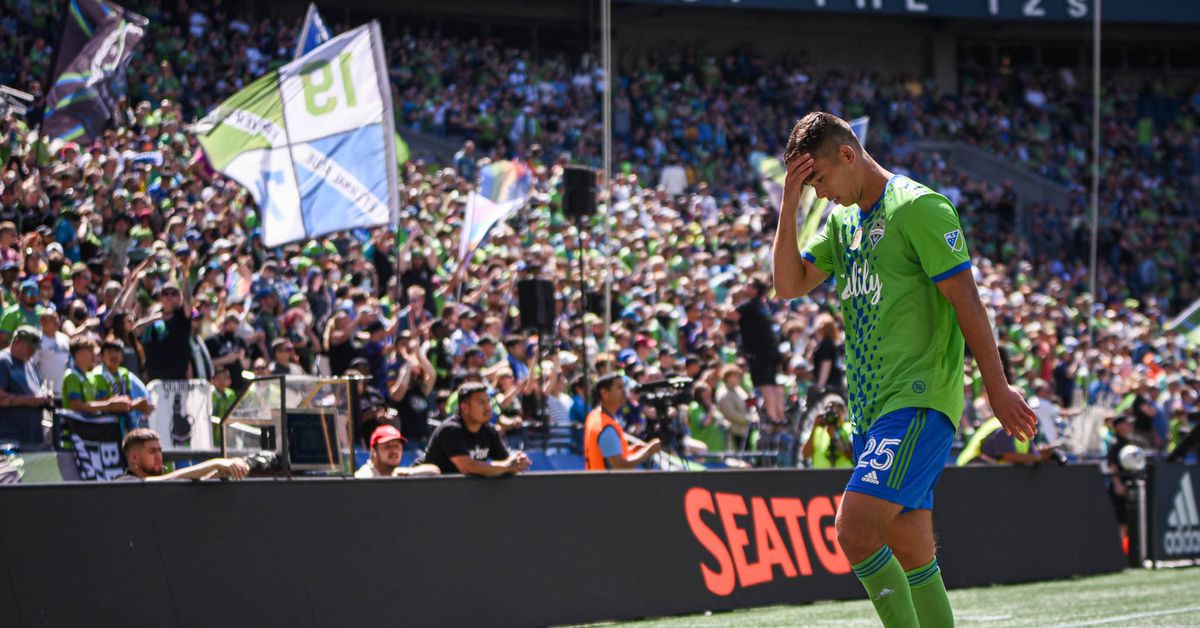 The Seattle Sounders welcomed the Portland Timbers to Lumen Field for what was meant to be a celebration. The Sounders unveiled their banner to commemorate winning the Concacaf Champions League against their biggest rival on national television, and although they put on a good show to start the game, they promptly fell apart on their way to a 3-0 loss at home. The years-long nightmare in Seattle when the Timbers come to town continues, and there’s no clear reason why. There’s only so much road wins in Portland can do to alleviate the frustration of losing home rivalry games for five years running.

The game started well enough, with Seattle creating a number of chances in the first 15 minutes. But the failure to capitalize on that pressure was immediately punished when the Timbers easily played through the defense to score the opener on a header at the back post. The Sounders still had opportunities to get back into the game — most notably a wide open shot from inside the box that Raúl Ruidíaz put off the post — but couldn’t find the back of the net. Things went from bad to worse at the start of the second half when Jackson Ragen picked up his second yellow card in the span of 90 seconds of game time.

The game really fell apart from a home team perspective in the final 10 minutes as the Timbers put away a penalty and a tap-in in the 82nd and 85th minutes to close out the game. The Sounders have a quick turnaround with a game on the road against Nashville on Wednesday, July 13 at 5:30 PM, followed by another road game against Chicago the following Saturday.

6′ — Raúl Ruidíaz gets on the ball just inside Portland’s half as the Sounders start an attack, but is immediately brought down by Eryk Williamson to draw a yellow for the midfielder.

15′ — Ruidíaz dances his way into the Timbers penalty area, sliding around multiple defenders before eventually winning a corner.

16′ — Jordan Morris gets on the ball inside the box on the right side. He sends in a low cross that Nico Lodeiro gets a touch to, but it’s out for a corner.

24′ — Goal Portland. Sebastian Blanco sends in a cross from the right side and neither Alex Roldan or Yeimar picks up Niezgoda as he runs in to head the ball home at the far post. 0-1

42′ — Cristian Roldan does well to get to the ball before it goes over the end line and hits a cross that finds Albert Rusnák at the far post, but his shot goes wide.

45′ — Ruidíaz gets the ball near the penalty spot as Morris cleans up a mess in the box after a corner, but Ruidíaz’s strike clangs off the goal post.

46′ — Jackson Ragen is judged to have gone in unfairly on a tackle and gets a yellow, his second of the game, and is sent to the showers.

82′ — After a long delay, Portland are awarded a penalty for a handball by Nouhou. Santiago Moreno converts beyond a diving Stefan Frei. 0-2 Portland

85′ — Josh Atencio gets left completely alone as the Timbers counter, and Dairon Asprilla easily finishes with only Stefan Frei to beat. 0-3

How does this keep happening? Tell me if you’ve heard this one before: the Sounders host the Timbers and put in a strong start to the game, but struggle to make it count. Portland grab a goal against the run of play and things seem to deteriorate from there. This time a goal on a counter that no one really made much effort to defend got things started for the Timbers and a second yellow early in the second half for Ragen pretty much sunk Seattle. The last regular-season win at home against Portland came back in May of 2017, and it’s getting pretty old at this point.

Jackson Ragen’s darkest hour: OK, that title’s a bit hyperbolic, but in his time with the Seattle Sounders, Jackson Ragen has been mostly really good. No matter how high the club was on the 23-year-old CB, I don’t think anyone expected him to have logged over 1400 minutes across all competitions at this point in his first MLS season. Even in this one, he’d been pretty good up until a few seconds before halftime when he was shown a yellow for a raised arm when going into a challenge near midfield during stoppage time. Then just after the start of the second half, he got his second yellow for a tackle on a breakaway. It’s his first professional yellow and hopefully will serve as a learning opportunity.

Please be careful: Raúl Ruidíaz was back in the starting lineup today, which was great. Then in the 81′ he subbed out after standing near the sideline for what felt like five minutes after he apparently felt some tightness. Coming off of a hamstring injury, it seems fair to worry about his availability for the coming games. Although the Sounders looked good with Will Bruin and Fredy Montero as the No. 9 in Ruidíaz’s recent absence, for the Sounders to reach the heights that we know they’re capable of they need their first-choice striker. Hopefully, this really was precautionary and he’s alright, but it still might be best to let him have Wednesday off.

“All of those good things do not make this … even one iota less frustrating,” Schmetzer says of the team’s successes and today’s loss

2,534 — It’s been 2,534 days since. the last time the Sounders had a margin of defeat as bad or worse at home. That game was a 3-0 loss against the Vancouver Whitecaps.

man of the game