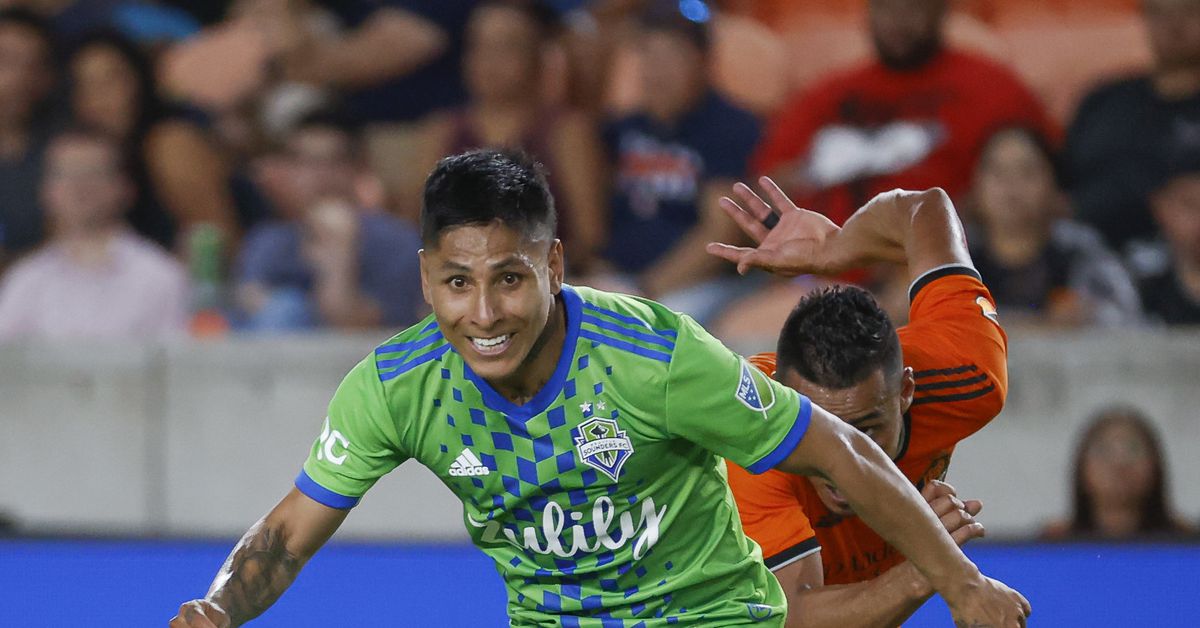 The Seattle Sounders went down to the Bayou for a midweek MLS game against the Houston Dynamo on Wednesday night. The team had to work for it, but they managed to see out a 1-0 win on the road. Seattle seemed to dominate during the opening half-hour, but for all of the chances and possession they didn’t trouble Houston goalkeeper Steve Clark much.

That changed in the 28th minute through Raúl Ruidíaz. The team worked the ball around the field, eventually leading to some quick interplay between Nouhou and Nico Lodeiro to release Jordan Morris into the Houston penalty area. Morris picked out a pass to the back post for Alex Roldán to run onto, and he touched the ball into place for Ruidíaz to hit home.

The game was pretty open throughout, with Houston chasing the game after the Sounders’ goal. In the 54th minute, it seemed like the Sounders should be able to start taking greater control of the game when Adalberto Carrasquilla was shown a second yellow for a tactical foul on Lodeiro. Instead, down a man, Houston continued to push for an equalizer, creating the bulk of the chances in the final half-hour.

Things took another turn when Alex Roldán was shown yellow cards in the 79th and 82nd minutes, bringing both teams to 10. That’s how the game would end, with the Sounders leading 1-0 and 20 players on the field. Seattle have now won two consecutive league games and head to face the Colorado Rapids on Sunday with a chance to extend their streak.

23′ — Houston manufactures one of the best chances of the half as they pass through the left side of Seattle’s defense, but the shot is right at Stefan Frei.

26′ — Houston wind their way into the penalty box once again, but Yeimar intervenes just before the shot by putting a foot in and Albert Rusnak dribbles out of the area.

28′ — Raúl Ruidíaz has the first goal! Nico Lodeiro springs Jordan Morris inside the area. Morris crosses to the other side of the area, where Alex Roldán crosses to Ruidíaz. 1-0

54′ — Adalberto Carrasquilla, already on a yellow card, tugs on Nico Lodeiro as he dribbles through the midfield, earning a second yellow. Houston goes down to 10.

68′ — Through a bit of luck and effort Houston manages another good look in the Sounders area, but Frei drops to his left and catches the shot.

82′ — Alex Roldan is judged to have committed a tactical foul and is shown his second yellow only three minutes after receiving his first. Both teams now down to 10.

90′ — The Sounders get a good look following an Ethan Dobbelaere nutmeg. Dobbelaere gets a cross blocked but picks up the rebound and finds Will Bruin, but the header is wide.

Minds on MLS: Following the win over Minnesota United on Sunday, Brian Schmetzer was adamant that despite winning CCL the Sounders still had plenty of work ahead of them. With the team out of the US Open Cup, the focus is all on league play. Schmetzer started as much of a first-choice lineup as he could on a Wednesday night in Houston, demonstrating just how much getting into a winning habit in MLS means. There was plenty to be frustrated by in this one — the double-yellow, some of the passing and inability to set a tempo, the finishing — but what’s most important at this point is taking three more points into the weekend. Seattle still has games in hand, but those don’t mean anything if they don’t win them.

Rusnak rock: Brian Schmetzer mentioned at halftime that the team needed to do a better job of establishing and dictating the tempo of the game. He needed a metronome, and in the absence of João Paulo, Albert Rusnák took on the role. In Rusnák, Schmetzer doesn’t quite have the driving drums of JP to push the team forwards and pick them up when they’re lagging. Instead he’s got something more like a funky bass line. Maybe not quite as dominating, or imposing, but Rusnák takes and creates space to riff for himself and others, provides a steady rhythm for others to work off of, and keeps the music moving even when things aren’t going quite to plan. He was all over the place, putting up solid numbers in every part of the game, and just generally proving what a good move his signing was.

Playing the kids: Obed Vargas missed this one due to yellow card accumulation, but his absence doesn’t mean there aren’t still youngsters for Schmetzer and the team to lean on. Josh Atencio came on for Kelyn Rowe in midfield in the 56th minute, and Ethan Dobbelaere played the final 10 minutes plus stoppage time, replacing Rusnák. Atencio was pretty good, showing some of the vision and willingness to dribble that was so exciting last season, although he did make mistakes. Dobbelaere’s stint was a short one, but he still managed to find an opportunity to create a promising chance. Dobbelaere got played in by Nico Lodeiro before nutmegging his defender and eventually finding Will Bruin with a cross inside the area, but the header was wide. Both players have put in performances recently that will give Schmetzer confidence in handing them more minutes as the season progresses.

Patience is a virtue.

Brian Schmetzer appears to have cooled after seeming a bit frustrated in the immediate aftermath: “We sang Jingle Bells and we had a clean sheet. No one is going to care in September or October how we got the result. Everyone should be happy, this puts us in great shape.”

1 — Cristian Roldan missed 1 pass of the 48 he attempted.

man of the game