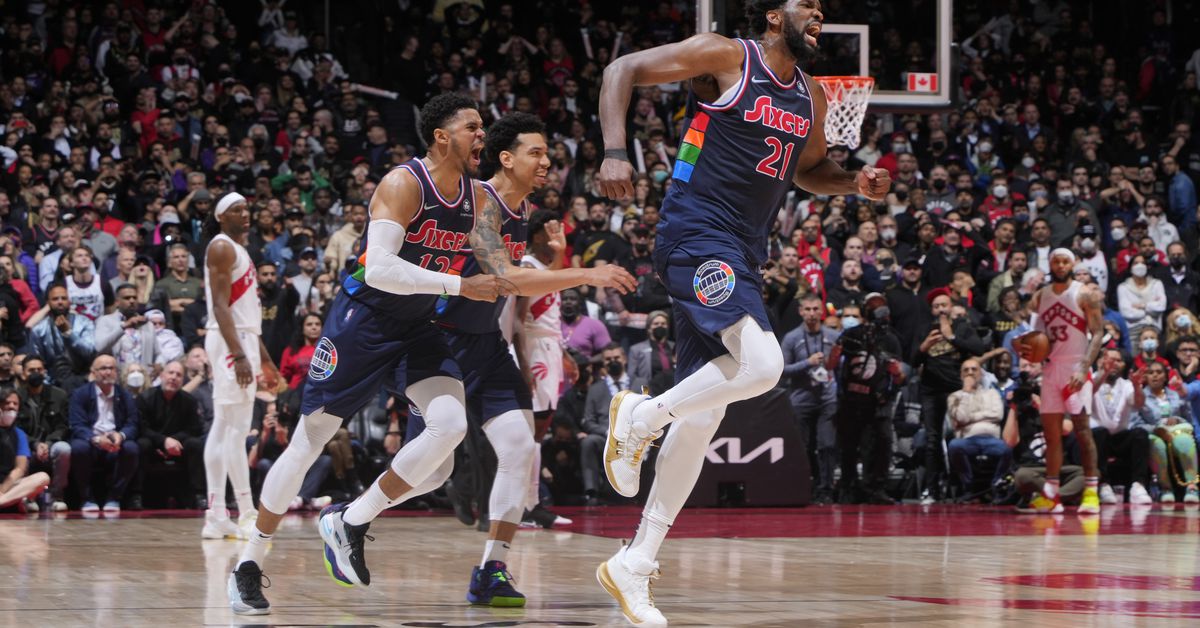 Everything that the Sixers were doing right back in Philadelphia, they did wrong at the start of this game in Toronto. They started to frequently turn the ball over, leading to plenty of fast break points for the Raptors. Toronto also won the second-chance points battle, and quickly built a 10-point lead after one quarter and held that same advantage at halftime. But the Sixers chipped away, and forced bonus basketball, eventually taking their first lead of the game in the opening seconds of overtime. All of it set up this moment for Joel Hans Embiid:

Joel had a rough start tonight, turning the ball over left and right and seeing his club fall behind by double digits. But he flipped the switch into MVP mode starting in the third quarter, when he scored 18 points alone. Embiid flashed the full arsenal of moves, but the his most emphatic points were simply a display of sheer power.

In the fourth quarter, Embiid hit a couple big jumpers, including a ridiculous fadeaway three from the wing following a pump fake.

He didn’t hit the contested game-winner at the end of regulation, but Joel canned another absurd turnaround jumper from the circle to put the Sixers back in front in overtime. Then, of course, the game-winner with less than a second on the clock in overtime. What an exhilarating moment, for him to hit that shot at the same basket where he endured such heartbreak three years ago. I couldn’t be happy for the man.

While the Sixers looked frantic and a bit overwhelmed by Toronto’s now-or-never energy in the first half, it was the steady hand of the 32-year-old veteran who kept the squad within striking distance. He led Philadelphia with 12 first-half points, drilling a pair of threes and drawing a couple fouls at the rim. The Beard also had the ball in his hands for the guts of the game towards the end of regulation, converted on a drive (that got called for a goaltend) with a little over a minute left to pull within one. The next possession, Harden drew the foul and made one of two at the foul line to tie the game. Although he crowded out with 26.6 seconds left in regulation, Harden’s fingerprints were all over this victory.

Tip of the cap to Tobias, who didn’t carry the scoring load of Games 1 or 2, but he was reasonable efficient and made a lot of winning plays tonight. He converted a couple tough drives through the lane, one bailing out Harden after he almost lost the dribble and shoveled it to Harris with the shot clock winding down, and nailed a very difficult baseline turnaround. But we’ll remember Tobi for his rugged work on the boards in this one, exemplified by his incredible effort for the offensive rebound at the end of regulation where he fell six inches short of being a hero with his putback attempt. Harris also continued to play excellent defense, primarily on Pascal Siakam, who shot just 6-of-16 on the night.

Who is the Bell Ringer in the Game 3 win over Toronto?