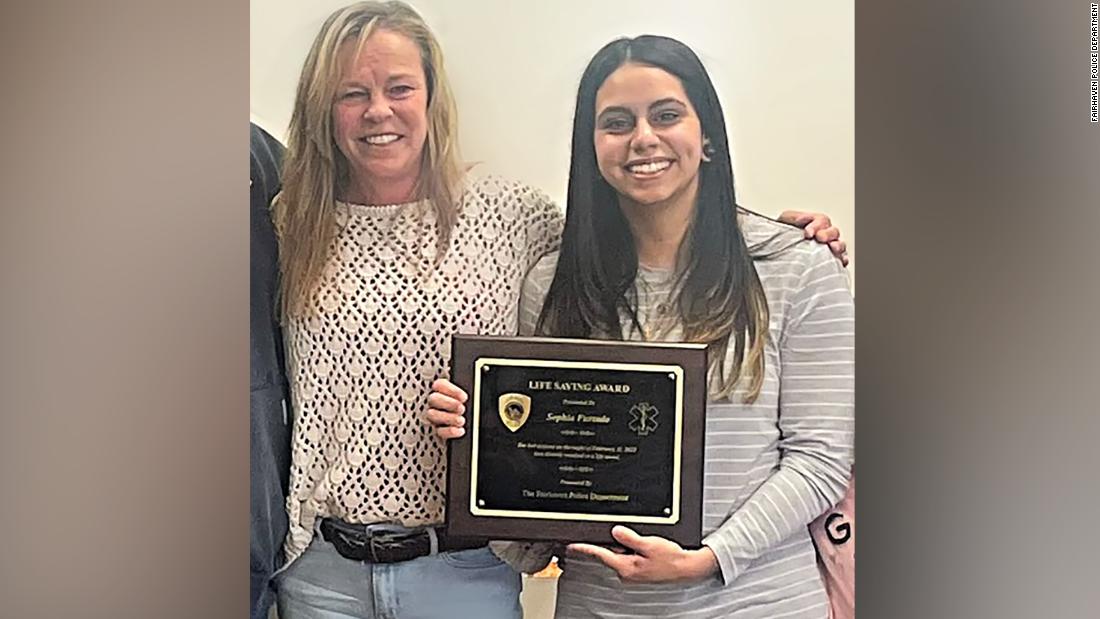 Caryn Hebert Sullivan put in the call for a late dinner on February 11, and DoorDash driver Sophia Furtado brought the order to an address in the small community of West Island Fairhaven, located on Buzzards Bay, about 20 miles southeast of Fall River.

“It was a normal night for me,” Furtado told CNN Thursday, “I was almost at the end of my shift.”

But when she got to the house around 10 pm, she spotted Sullivan lying on the ground outside, bleeding from her head. Sullivan, who had a previous arm injury and a bad knee, had been waiting outside for the delivery.

As she turned, she counted, her arm and knee gave out. She fell and hit her head on the way down.

“I just remember laying on my driveway thinking ‘This is pretty much over,'” Sullivan recalled. “I was laying there and saw a lot of white clouds.”

Furtado has previous medical knowledge from her time training as an Emergency Medical Technician, but had failed the National Registry test. She noticed Sullivan’s blood was congealing and estimated she had been lying outside for about 15 to 20 minutes.

“Caryn was unresponsive, and her eyes kept rolling to the back of her head,” Furtado said, “I felt like I was going to lose her.”

Sullivan’s husband Robert had been asleep inside the house, but awoke to Furtado’s calls for help. She told him to get some supplies as she dialed 911.

According to Officer Jillian Jodoin of the Fairhaven Police Department, Furtado spoke with the dispatcher while rendering aid.

“At that moment Sophia became part of our team to aid Caryn.” Jodoin told CNN, “I asked her if it was possible for her to keep stabilizing Caryn’s neck to keep her spine safe, her answer was, ‘I’m not going anywhere.’ “

Soon after, officers and medics began arriving. Furtado stayed with her, until Sullivan was transported to the hospital.

Sullivan said she was in the hospital for three weeks following the incident, and suffered from two severe brain bleeds. Robert and her daughter, Veronica, were by her side the entire time. At one point, she said the two of them were waiting until 2 am to hear if she would make it.

After her time in the hospital, Sullivan arrived home in March. “I couldn’t drive, I couldn’t write, I could barely walk,” she said. While she was deemed fully recovered at the end of March, she’s still working on some things, after losing 60% of her hearing, and she is now able to drive short distances.

Despite the terrifying experience, Sullivan and Furtado gained friendship during the trauma.

“I am so thankful for her, she’s my guardian angel,” Sullivan said, “Thank God she was there, if she wasn’t there, I’d be dead.” They have both met each other’s families and Sullivan even gave Furtado’s two children Easter gifts.

Furtado was recognized at a ceremony on Wednesday. DoorDash awarded her a $1,000 educational grant.

“We are incredibly grateful to Ms. Furtado for stepping in during a critical moment and are relieved that the customer has since safely recovered.” A DoorDash spokesperson told CNN, “Ms. Furtado’s care and quick response were nothing short of heroic and we are honored to have been able to show our appreciation for her tremendous efforts.”

Fairhaven police also presented her with a lifesaving award.

The recognition came as a surprise to Furtado.

“I was not expecting it at all,” She said, “I would’ve done that for anyone.”

Furtado had previously been a DoorDash driver and picked up the job again in January. She said she hopes to use the money toward more EMT school when her family becomes more financially stable. She and Sullivan added they will continue to stay in touch and plan to meet up again.