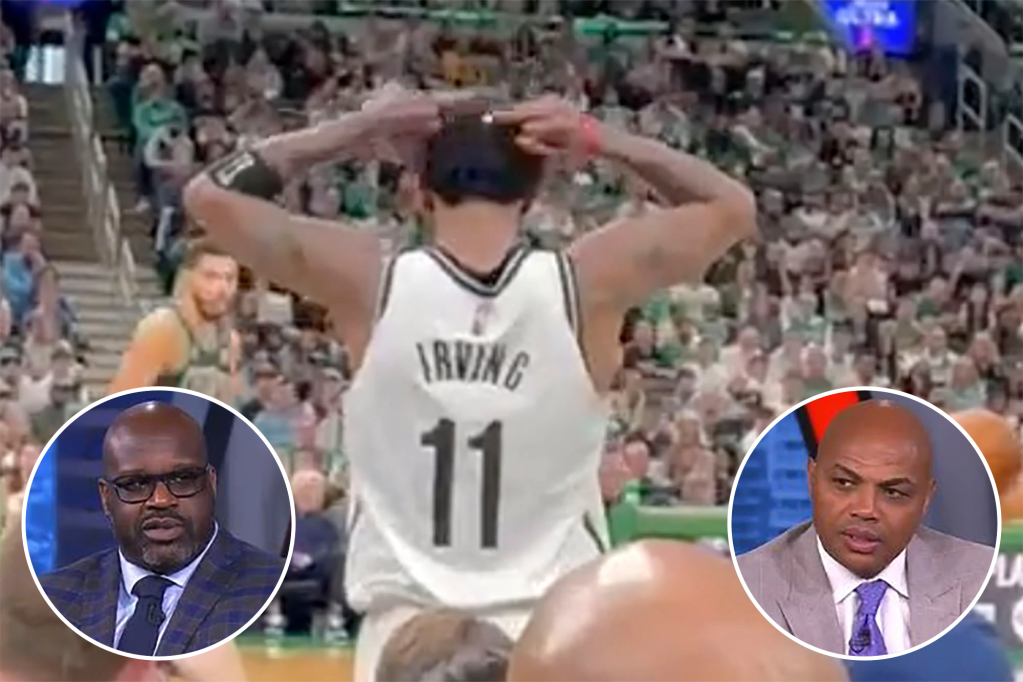 Shaq and Charles Barkley aren’t here for Kyrie Irving’s “dark side” that he admittedly embraced while flipping off fans in the Nets’ 115-114 Game 1 loss to the Celtics Sunday.

After the game, Irving said his double-bird to Boston fans was courtesy of him “keeping that same energy” hecklers brought to TD Garden during Sunday’s first round series opener.

“I don’t really wanna hear all that,” Shaq said on “Inside the NBA” on TNT during the halftime break of the Bucks-Bulls game.

“Certain cities, they don’t care what you say at the press conference. You know what’s going to happen in Game 2? They’re going to be talking more smack up there in Boston… It happens to the best of us,” he added, noting his time playing for the Celtics in 2010-11 — his final NBA season.

Charles Barkley chimed in and said, “Please stop it, you athletes of today, whining.”

Irving played for Boston from 2017-19 and has been a Celtics villain since he left the organization. Last season, Irving was hit with a water bottle by a Boston fan after he stepped on the Celtics logo at center court in Game 4 of the Eastern Conference quarterfinals.

On Sunday, Irving scored 39 points as Boston fans booed him on every shot he took. During the game, the point guard was seen mocking Celtics faithful, and at one point held up two middle fingers behind his head at the crowd.

“Look, where I’m from, I’m used to all these antics and people being close nearby,” Irving said after the game. “It’s nothing new when I come into this building what it’s going to be like — but it’s the same energy they have for me, I’m going to have the same energy for them.

“And it’s not every fan, I don’t want to attack every fan, every Boston fan. When people start yelling ‘p—y’ or ‘b—ch’ and ‘f–k you’ and all this stuff, there’s only but so much you take as a competitor. We’re the ones expected to be docile and be humble, take a humble approach, f–k that, it’s the playoffs. This is what it is.”

“I know what to expect in here,” Irving continued. “And it’s the same energy I’m giving back to them. It is what it is. I’m not really focused on it, it’s fun, you know what I’m saying?

“Where I’m from I’ve dealt with so much, so coming in here you relish it as a competitor. … This isn’t my first time at TD Garden so what you guys saw, what you guys think is entertainment, or the fans think is entertainment, all is fair in competition. So if somebody’s going to call me out on my name, I’m gonna look at them straight in the eye and see if they really ’bout it. Most of the time they’re not.”

Irving also claimed that this wasn’t the first time he’s flipped off fans during a game.

“This is the first time you actually caught it because this is a big-time game,” he said. “I respond in different ways. I’m not trying to focus on that. If you want to ask me questions about the fans, go ask them. Go on the street and ask them questions.”

When asked if the “energy” from the Boston crowd brought out the best in his game, Irving said, “Embrace it. Embrace it. It’s the dark side. Embrace it.”

Last month, Irving compared Celtics fans to a “scorned girlfriend,” following a Nets loss to Boston. On Sunday, he said he’s not focused on his history with his former team.

“Don’t care at this point. …I’m on the Brooklyn Nets. I’m happy to be with my teammates and competing out there,” he said.

Game 2 is set for Wednesday at 7 pm ET in Boston.