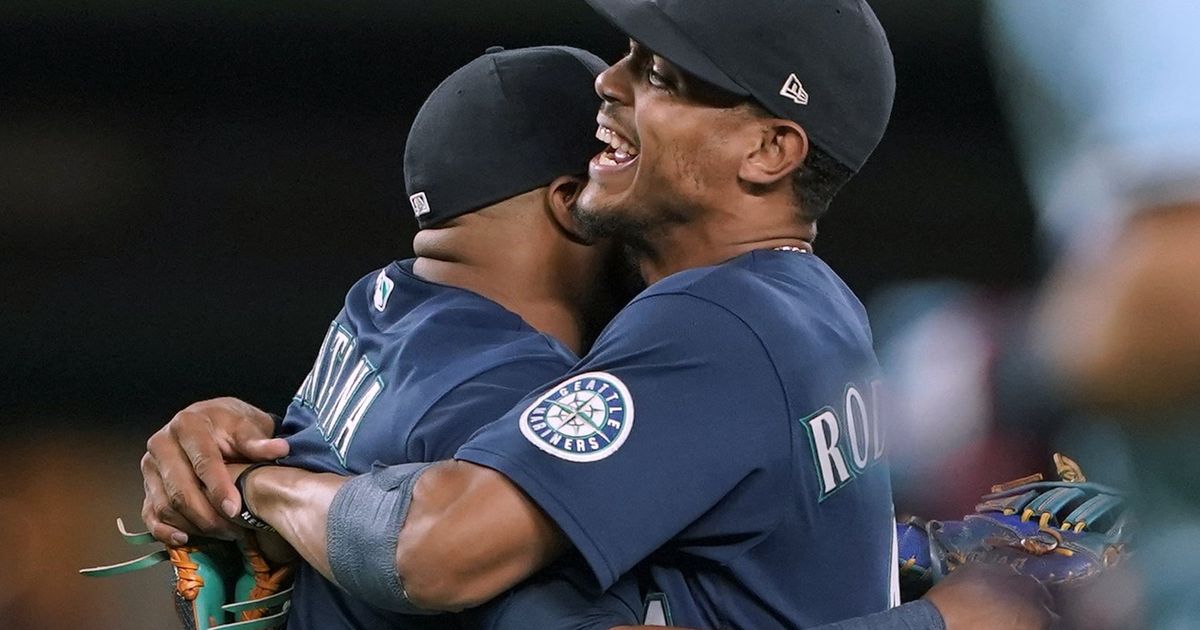 The songs of Let’s Go Blue Jays! grew loud with confidence and emotion, providing evidence that Mariners fans in the crowd of 41,210 were still outnumbered in their own park.

The bad luck, which they’ve been immune to in the previous weeks, was starting to pile up in the ninth inning on the Mariners and Diego Castillo. When the tying run — Vlad Guerrero Jr. — and go-ahead run — Alejandro Kirk — each reached on singles that were nowhere close to the strike zone, the familiar uneasy feeling of losing a win permeated.

But Castillo, who was working his third game in three days, seemed unaffected by the tense, playoff nature of the ninth inning on a perfect Saturday night at T-Mobile Park. He’s pitched in more World Series games than the Mariners have postseason appearances in his career. Castillo coolly silenced the well-served Blue Jays fans and brought the Mariners fans to their feet, working out of jam and locking up a 2-1 win for the Mariners.

With an overworked bullpen and playing a direct competitor for a wild-card spot, Castillo was going to be available for manager Scott Servais.

“Right now, we are competing to go to the playoffs and we are in a good position,” Castillo said. “For me, I told him, ‘I’m ready, whenever you need me.’ I was ready.”

Seattle has taken the first three games of the four-game series and has now won seven games in a row and 15 of its last 18. The Mariners (44-42) are two games over .500 for the first time since May 1. They have won six consecutive series and will go for a sweep on Sunday afternoon with right-hander Logan Gilbert on the mound.

“That was just a different type of big league,” Servais said. “It’s all about pitching in this game. It always has been and always will be. You saw it on display tonight on both sides. It doesn’t get any better.”

Indeed, the duel between Mariners starter Robbie Ray, who had the added motivation of pitching against the team he won the American League Cy Young Award with last season, and Toronto defensive tackle/starting pitcher Alek Manoah was outstanding.

The Mariners generated just three base runners — two walks and a Ty France double — over the first six innings.

“He was as good as advertised,” Servais said.

But Seattle finally broke through in the seventh inning against Manoah. JP Crawford led off the inning with a single to center. It brought to the plate veteran first baseman Carlos Santana.

After struggling to catch up with Manoah’s mid-90s fastball in his second at-bat, Santana went up there looking for one. He jumped on an 0-1 fastball up in the zone, hammering it off the electronic scoreboard just below the Hit It Here Café for his first homer as a member of the Mariners.

“His ball was moving a lot,” Santana said. “The first at-bat he threw a lot of change-ups and second at-bat, he threw some tough pitches. He made a mistake to me.”

Meanwhile, the Blue Jays got to experience the version of Ray that also throws a sinker to complement a four-seam fastball that was about 2 mph faster on the evening and his devastating slider.

He faced the minimum amount of hitters over the first four innings with only Teoscar Hernandez reaching base on a single to left. But Ray erased him as a base runner with a nice pickoff move to first base.

In the fifth inning, Toronto loaded the bases on Ray on a single and a pair of walks. He walked around the man, and came up with a simple plan.

“Just get nasty,” he said. “In that situation, bases loaded, nobody out, I’m just throwing my best pitch every single time. And I just told myself to get nasty.”

As Blue Jays fans roared, Ray proceeded to strike out Matt Chapman, get Santiago Espinal to hit a soft pop fly to second base and get Raimel Tapia to ground into an inning-ending fielder’s choice.

Normally stoic, besides the grunting on each pitch, Ray screamed and pumped his fist after working out of the sort of inning that torpedoed starts earlier in the season.

“It was huge,” he said. “It was just a moment where everything just stopped and it was just a really cool experience.”

His only blemish came an inning later. After falling behind George Springer 2-0 to start the inning, Ray fired a 93-mph fastball on the outside corner. An annoyance to Mariners pitchers dating to his days with the Astros, Springer stayed on the pitch and drove it over the wall in right field for a solo homer and a 1-0 lead. It was Springer’s 16th homer of the season and his 23rd career homer vs. the Mariners.

With Ray done after 95 pitches, the Mariners turned to rookie Matt Brash, who was recalled before the game and returned to the team as a reliever. After making the opening-day roster as the No. 5 starter in the rotation and losing the job due to lack of command, Brash was converted to a reliever in Tacoma.

Brash’s first relief appearance at the MLB level was impressive. He struck out two of the three batters he faced in the scoreless frame, including winning a 13-pitch battle with Lourdes Gurriel and showing a fastball that hit 100 mph.

Andres Munoz, who has a similar power pitching profile to Brash, was just as dominant in the seventh, striking out a pair of hitters in a 1-2-3 frame.

“That was playoff baseball right there,” Ray said. “A close game all the way to the end. It was loud. And it was a lot of fun.”