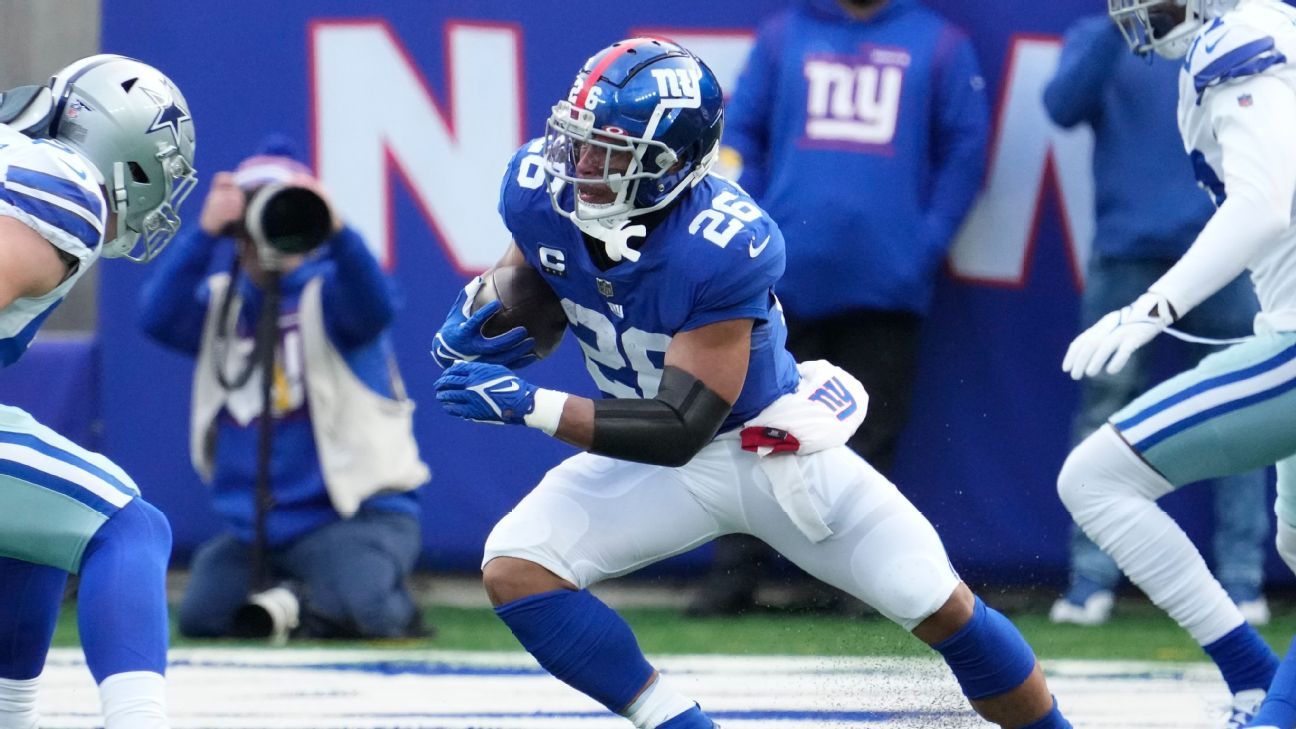 EAST RUTHERFORD, NJ — New York Giants running back Saquon Barkley has heard enough of the “BS” He’s ready to silence the critics after his production dipped precipitously the past two-plus seasons.

Barkley has dealt with ankle and knee injuries since midway through the 2019 season. He has just 627 yards rushing and three total touchdowns in the past two years combined.

But now there is hope he is healthy and ready to thrive in coach Brian Daboll’s new offense.

“My mindset from just the last two years, to be honest, I kind of just want to kill, go crazy. I don’t want to jump the gun. It’s a long way before September and we start the regular season,” Barkley Wednesday said after a workout during the team’s voluntary minicamp.

“To be honest, I’m just tired of whatever is written about me, the BS that’s said about me or this team. I want to go out there and prove to this organization that the player they drafted is still there, I can still do special things with the ball in my hands, and I can help this team.”

The problem is that it hasn’t happened often since a record-breaking rookie season. It has led to Barkley hearing more criticism than at any other point in his football-playing career.

Barkley even has said in numerous interviews that those who have doubted him should stay on the other side of the table when things do eventually turn around.

“One thing I’ve learned is the story that’s going to be told is people are going to shape it the way they want it to be told,” he said. “I feel like there’s a lot of things that are left out.”

The bottom line, however, remains that it has been a rough few seasons. Barkley hasn’t been healthy or productive.

“It’s not just that, to be completely honest. The productivity level, it’s just — I don’t want to really get too into the details of what is being said,” Barkley said. “If I get into that, probably you know who I’m talking about. So, I’m just going to say that I’m just tired of BS Just want to go out there, play the game I love, and have fun with my teammates.”

It helps that Barkley isn’t coming off a serious knee injury like last offseason. He tore the ACL in his right knee during the 2020 season and wasn’t fully cleared until late last summer.

That isn’t the case this year. The ankle he hurt last season when he stepped on a Dallas defender’s ankle has been fine for quite some time.

“I definitely feel a lot different, a lot better. I feel like myself again,” Barkley said. “Obviously, I don’t want to jump the gun, I just want to keep focusing on the little things and get better every day. No matter what for the rest of your career, with injuries, every offseason is going to be kind of somewhat rehabbing or prehabbing so you make sure you don’t get injured.”

There was talk this offseason about Barkley being traded. General manager Joe Schoen had left open the possibility at the NFL scouting combine.

But Schoen has insisted he hasn’t shopped the 25-year-old running back, even if he did take some phone calls. Schoen and Daboll even called Barkley from the combine to make it clear that moving him wasn’t a priority.

“At first, I was working out and I came home and my phone was blowing up. I was like, ‘What the heck?’ At first, I thought I got traded, but you never know in today’s world,” Barkley said. “But then when I looked it up and I saw it, I didn’t really take it like that, to be completely honest. That’s his job. He’s supposed to do whatever he feels that can help this team win and this organization win. That’s his job. When I saw the response, I really didn’t take it as, ‘Oh, dang, he wants to get rid of me, or the Giants want to trade me.’

“To be honest, I felt like that was more of just word of mouth, the media kind of create a story. I didn’t really take it like that to be completely honest.”

And now he’s focused on improving every day and silencing those critics. Because they’re louder now than ever before.