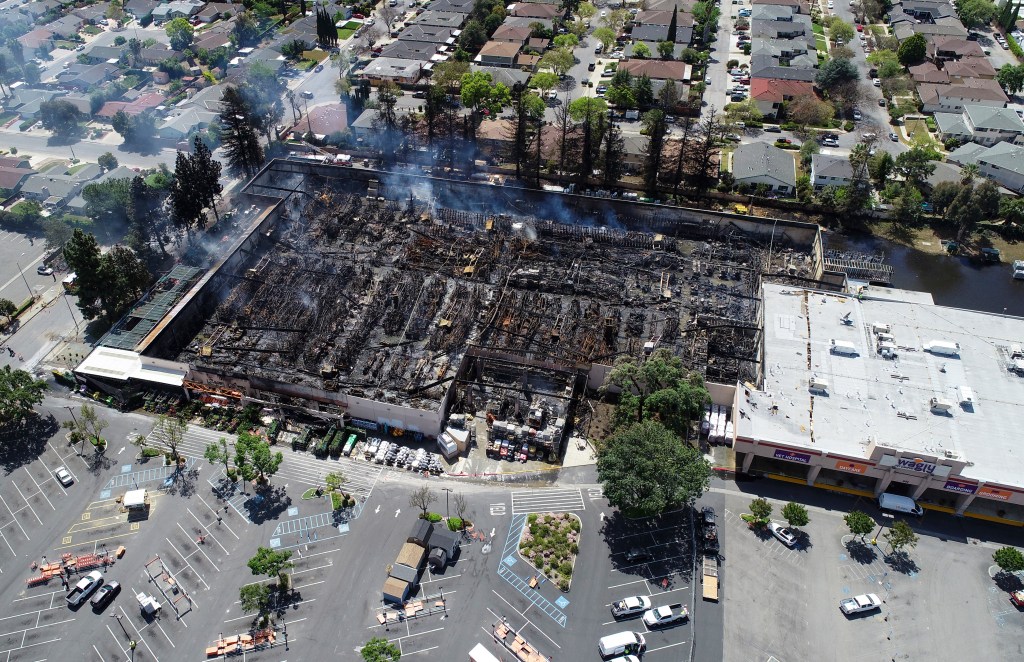 A man has been arrested and charged with igniting a massive blaze that destroyed a Home Depot earlier this month in South San Jose, authorities said, as newly released records show that the store was recently cited by fire inspectors for failing to show proof its fire alarm and sprinkler systems were up to speed.

Details on the person who was arrested, including his identity and motive for setting the store ablaze, were not immediately released.

The Santa Clara County District Attorney’s Office has announced a Tuesday morning news conference with San Jose Mayor Sam Liccardo, the city’s fire and police departments and the federal Bureau of Alcohol, Tobacco, Firearms and Explosives to discuss the arrest and other details of the fire investigation .

Multiple law-enforcement sources told this news organization that the arrest occurred over the weekend, meaning that the person detained could be arraigned in court as soon as Tuesday afternoon.

Authorities believe the arrested man ignited the five-alarm fire that broke out on April 9 in the lumber section of the Home Depot at 920 Blossom Hill Road. No one died in the fire — which was so intense at its peak that its heat signature was detected in space by orbiting weather satellites — though the residual effects left neighborhood residents fending off noxious smoke for at least two days after.

Meanwhile, inspection records reveal that San Jose fire officials registered concerns about the 98,000-square-foot building’s fire alarm and sprinkler systems more than a year before the fire. Customers and employees who were at the Home Depot when the fire broke out questioned why the store’s fire alarms reportedly did not sound until nearly everyone was outside of the building, and whether the store’s sprinklers ever activated.

Records obtained by this news organization show that during a Dec. 14, 2020 inspection, San Jose’s Bureau of Fire Prevention found violations at the Home Depot site based on managers’ failure to provide proof they were conducting annual inspections of its fire-alarm system and that they similarly failed to show documentation that its sprinkler system had been serviced or inspected within the past five years.

It was not immediately clear Monday whether the violations were remedied before April 9.

The city’s fire code states that facilities like the Home Depot should be inspected annually to ensure that sprinkler systems, water pipes and other fire protection systems are up to date.

A subsequent hazmat inspection on Oct. 5, 2021 — the last time the site was examined by safety officials — uncovered a separate violation regarding an inadequate amount of workspace for electrical service equipment. That violation was remedied less than a month later, the inspection report indicates.

Dispatchers were alerted to the blaze at about 5:30 pm on April 9, when they received numerous calls from employees and bosses about a commercial structure fire, according to fire officials. The Home Depot store, housed in a shopping center across from Westfield Oakridge Mall, went up in flames within minutes, sending customers and employees fleeing for their lives.

More than 100 firefighters responded to the scene and the neighborhood behind the store in an attempt to prevent any damage to nearby homes and businesses.

The intense heat that the flames put off — created by a mixture of lumber, chemicals and paint products inside — formed a massive plume of black and gray smoke and was so strong that it was detected by orbiting satellites. It took firefighters six hours to get the blaze under control. Officials have not yet provided a cost estimate for the building’s destruction and loss of store merchandise.

Monday’s arrest news came more than a week after investigators began working to determine the cause of the fire. Agents with the ATF arrived at the scene on April 13 to assist with the investigation.

This is not the first fire sparked by an arsonist at a Home Depot. In June 2017, an arsonist in Canada was sentenced to five years in jail for allegedly using a lighter to spark a blaze in the paint section of a Home Depot store.

In March 2018, a 50-year-old man was arrested on suspicion of setting a fire inside a Home Depot store in Mesa, Arizona. And just two years ago, a Home Depot employee in Ohio was indicted on a felony charge for allegedly purposefully setting the store he worked at on fire, according to reports.

Although some of the Home Depot in these cases suffered extensive fire and water damage, it does not appear that any of them were leveled in the way that the San Jose store was.

Check back later for updates to this story.