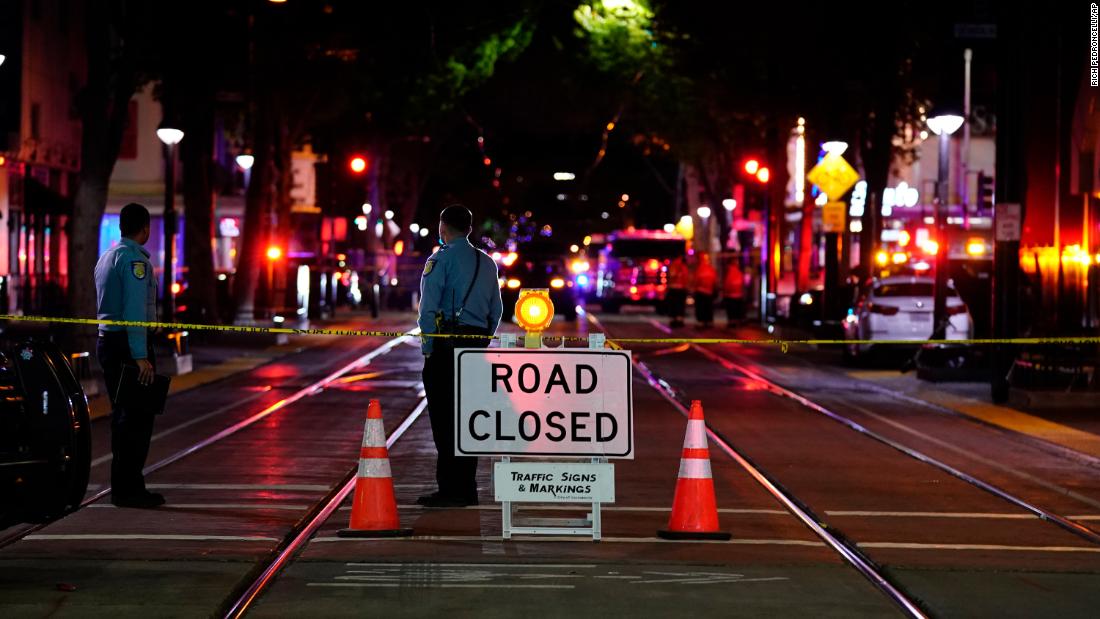 “We believe at this point there are five shooters and the five shooters included two groups where there was an exchange of gunfire between the two groups,” Sacramento Police Sgt. Zach Eaton said in a Wednesday briefing with reporters.

Eaton declined to elaborate on the gang affiliation of those involved and had no information on potential retaliatory violence, but noted extra law enforcement is in the downtown area, poised to respond to any concerns.

As detectives continue identifying the shooters and weapons involved, the number of identified gunmen may “grow beyond five,” the Sacramento Police Department said in a news release.

“This tragedy downtown is a very public example of what families in many of our neighborhoods know too well,” said police chief Kathy Lester. “The suffering inflicted by gang violence does not limit itself to gang members. It spills over to claim and shatter innocent lives and harm our entire community.”

Police credited community support in the form of more than 200 video clips, photos and other bits of evidence in helping them evaluate the incident.

The Sacramento shooting was one of more than 120 mass shootings in the United States this year and one of at least 10 shooting incidents over the weekend.

Three arrested in connection with shooting

In the aftermath of Sunday’s shooting, three men have been arrested, though only one has been officially charged and made a court appearance as of Tuesday evening.

The shooting took place just after 2 am PT Sunday and left six people dead, 12 wounded and a chaotic crime scene littered with more than 100 shell casings.

Police have said the investigation is highly complex and involves many witnesses, numerous videos and significant physical evidence.

The latest development came Tuesday when police said they arrested someone for “being a prohibited person in possession of a firearm.” Police said he was seen carrying a gun in the immediate aftermath of the shooting, but believe that gun was not fired in the melee. He has not been charged with crimes directly related to the shootings, police said, and online inmate records indicate he was released. CNN has reached out to the public defender’s office.

The other two men arrested are brothers — Dandrae Martin, 26, and Smiley Martin, 27 — who were taken into custody Monday and Tuesday. The brothers are believed to be responsible for firing into the downtown crowd, according to Sacramento police Officer Chad Lewis, though he named only Dandrae Martin.

“He (Dandrae) was charged with assault with a firearm,” Lewis said, but did not rule out the prospect of others having fired shots. “There could be more than the two shooters we’re already aware of,” Lewis said.

Dandrae Martin has been charged with felony possession of a firearm. He made his first appearance in court Tuesday, but did not enter a plea.

“That firearm was modified from its original condition with a component that made it capable of firing automatic gunfire and would classify it as a machine gun by California law,” Lewis said.

Smiley Martin was found at the scene of the shooting early Sunday with “serious injuries from gunfire” and taken to a local hospital, the Sacramento Police Department said in a news release. Once Smiley Martin’s medical care is complete, he will be booked at the Sacramento County Main Jail on charges of possession of a firearm by a prohibited person and possession of a machine gun, police said.

The Martin brothers were among the dozen people injured in the shooting.

Dandrae Martin’s next court date is April 26, where his bail is expected to be set. His attorney, Linda Parisi, said Martin was “very somber” during their brief discussion, adding she feels the response to gun violence should be bigger than just one case.

“This is not just a criminal justice issue, and it is narrow-sighted to say well all we have to do is address what happened on this occasion, have it processed through the criminal justice,” she told reporters. “It’s bigger than that and we need to address that. People are suffering, all people. As I say, everyone is touched by gun violence.”

A fight may have preceded the shooting

The shooting happened in a bustling part of downtown, a few blocks from the California State Capitol, Sacramento City Hall and the Golden 1 Center, where the city’s NBA team plays home games.

A video posted on social media appears to show an altercation before the shooting, police said Sunday. “We are currently working to determine what, if any, relation these events have to the shooting,” the statement said.

Search warrants were executed at three homes and at least one handgun was recovered, according to the Sunday statement, and authorities said they had received more than 100 video or photo files on a tip portal.

Detectives have since found “hundreds of items of evidence at the scene,” including more than 100 shell casings, police said in a Tuesday news release. Investigators also located a stolen handgun that was “found to have been converted to a weapon capable of automatic gunfire,” police said.

At least three buildings and three cars were hit by bullets, according to police.

“There were a lot of shots fired that night, and hence the complexity of the investigation,” police Chief Katherine Lester told CNN affiliate KCRA. Lester said there were multiple shooters and that a large fight preceded the gunfire.

The youngest victims were 21

The Sacramento County Coroner’s Office on Monday identified the six victims who died:

During an emotional vigil Monday night, members of the Sacramento community and officials expressed frustration with repeated instances of gun violence in the city and called for action to prevent more shootings.

The shooting over the weekend was the second mass shooting in Sacramento in the past five weeks. On February 28, a man fatally shot three of his children and another man at a church. The gunman took his own life, authorities said.

Mayor Darrell Steinberg said solutions — not well wishes — are needed to help change the trajectory of gun violence in America.

Sacramento will keep investing in programs focused on early intervention and violence prevention for young people, he said.

“In our city, we will take stock and we will do everything we can — on the investment side, on the public safety side, on the gun side — to protect the public,” Steinberg said.

CNN’s Dakin Andone and Theresa Waldrop contributed to this report.