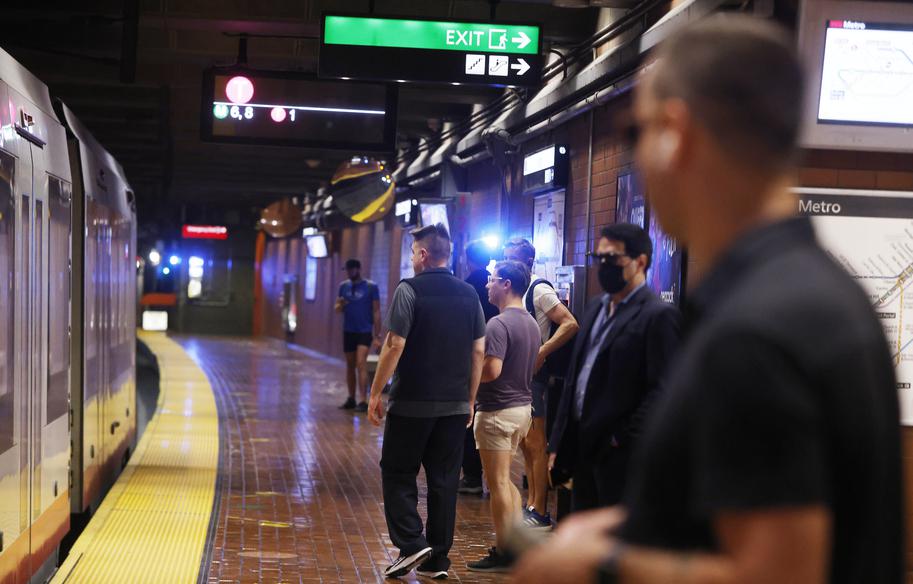 One person was killed and another injured Wednesday morning following a shooting inside a Muni train between the system’s Forest Hill and Castro stations, District Seven Supervisor Myrna Melgar said on Twitter.

Melgar, citing information she received from the San Francisco Police Department, said the shooter ran out of the train at the Castro Station and was still at large, but stressed that police were not handling the incident as an active shooter situation.

“We have too many guns out there,” Melgar said in a follow-up tweet. “Too, too many.”

About 9:56 am, San Francisco police responded to a report of a shooting at the Muni Forest Hill Station, but on scene discovered that the train had already left and was headed toward the Castro Station, according to police spokesperson Allison Maxie.

Officers discovered the two victims at the Castro station. A 70-year-old man was taken to San Francisco General Hospital with non-life-threatening injuries and a second victim, a 27-year-old man, died at the scene despite life-saving measures by San Francisco firefighters, police said .

Police confirmed that no arrests were made, and described the gunman as a male wearing dark clothing and a hooded jacket. On Wednesday night, San Francisco police released a still photo from surveillance video of a person authorities described as a person of interest.

Melgar told The Chronicle that the shooting was not random, and that the suspected shooter and another man were in a heated dispute prior to the gunfire.

“The shooter pulled out a gun and shot the guy he was arguing with,” Melgar said. “The second victim was not involved in the verbal altercation but just happened to be right next to the other victim.”

It was not clear if the shooting of the second victim, a female, was accidental, she said. The female victim was injured in the knee and is the one who survived her injuries, Melgar said.

Police are interviewing witnesses and closed off the Castro Street Station to gather evidence, Melgar said.

City officials Wednesday morning urged residents to avoid the area between Castro and Market streets due to police activity, and said bus shuttles were being arranged to transport people from West Portal to Embarcadero and Folsom Street.

State Sen. Scott Wiener, D-San Francisco, called the violence a “horrific tragedy,” and noted that it occurred on a stretch of subway line that he’d taken “thousands of times.”

“It’s another reminder that as long as our country is awash in guns, shootings can happen anywhere, anytime,” he said in a statement. “California has the strongest gun safety laws in the nation, and we’re continuing to strengthen them. But we need strong action from Congress to truly improve the safety of our community.”

Anyone with information about the person of interest or about the shooting should contact San Francisco police’s tip line at 415-575-4444 or text a tip to TIP411 and begin the text message with “SFPD.” Callers may remain anonymous.