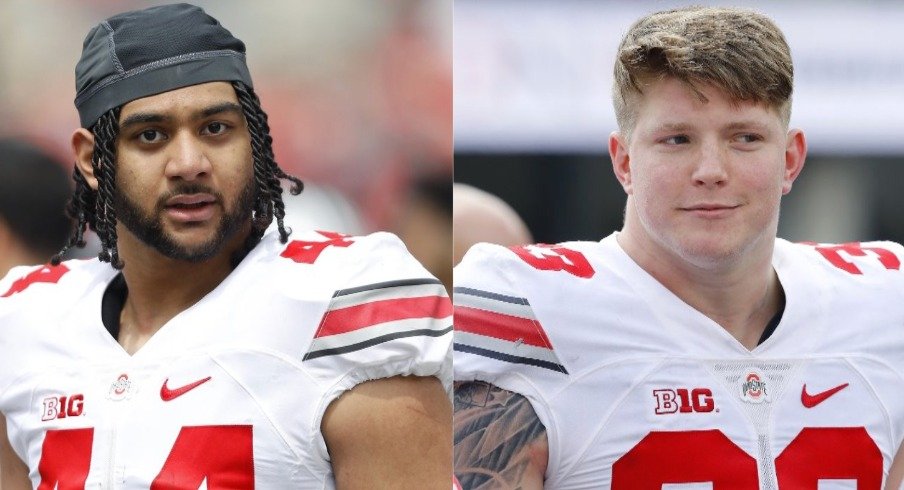 Zach Harrison and Javontae Jean-Baptiste may have been the starters, but JT Tuimoloau and Jack Sawyer were the standout defensive ends in Saturday’s spring game.

It must be acknowledged that the latter two had more opportunities, with the sophomores playing more than double the snaps of the veteran pass rushers, and many of them came against Ohio State’s backup offensive line. Nevertheless, if this past weekend’s exhibition was the only criteria by which to judge, it would be hard to argue that the duo of five-star underclassmen aren’t the most buzzed-about Buckeyes at the position at the conclusion of spring.

Ryan Day’s analysis of their spring game performances did nothing to dispel that notion Saturday, as the Ohio State head coach said the trajectory both Tuimoloau and Sawyer are on at the moment will turn them into impact players and difference-makers on the defensive line by the time September is coming.

“I think JT and Jack both have had very good offseasons. They’ve gotten stronger, they’ve gotten faster, technique’s been better – and you saw that today,” Day said in his postgame press conference. “If they continue to build this summer, then they’re gonna be a force in the fall. I think they’ve really taken to (Larry) Johnson and his system, too. Jim (Knowles) has a great way of kind of changing up the looks too to kind of keep the offensive guessing, and then the minute you think they’re moving, they come at you with a bull rush. So that combination of really good technique with Coach Johnson, the style and scheme that Coach Knowles has put together really fits those guys and a lot of guys on defense. There’s a bunch of guys today that showed up, but those guys have been strong.”

While neither Harrison nor Jean-Baptiste – who are entering their fourth and fifth seasons at Ohio State, respectively – registered a defensive stat in the spring game, Tuimoloau and Sawyer accounted for half of Ohio State’s six total sacks on Saturday.

“Today was very, very basic, as you could see, on both sides of the ball. But what I liked was just the physicality, guys running around and tackling. That was something that we wanted to get done in this game. But I thought you saw that and certainly the depth of the D-line is definitely gonna be a strength of ours,” Day said. “But it was good to see those guys run around and tackle, we’ll take a look at the film and see. But it was more about fundamentals and tackling and playing with effort today.”

RELATED Film Study: Based on What Was Shown in the 2022 Spring Game, Jim Knowles’ Buckeye Defense is Anything but ‘Basic’

His late arrival to preseason camp following a July 4 commitment last summer might have handicapped Tuimoloau’s chances at breaking out in the manner he hoped to as a first-year player in Johnson’s room, but he may just be making a run at a starting role before the season begins.

In fact, the same could be said about Sawyer, along with second-year tackles Tyleik Williams and Mike Hall, who are in a similar situation with several veteran interior linemen trying to stay in front of them on the depth chart.

“I don’t really care who starts, to be honest with you,” Knowles said after the spring game. “Because we’re gonna play a lot of guys up front and I want them fresh and I want them hungry, and the more the better. And that whole group you mentioned, they could easily be starters. I think they’re that good, they’ve had that kind of spring. So I see us playing a lot of guys up there.”

Sawyer had a sack of his own during a two-tackle effort on Saturday, and given Knowles’ penchant for employing the Ohio native in the hybrid (and aptly named) Jack position so far this spring, it seems likely Sawyer will find plenty of snaps one way or another this season.

It doesn’t hurt that Knowles seems to like Sawyer’s attitude, as well.

“I love the way he plays, I love his toughness,” Knowles said. “And Jack seems to be that kind of kid who will snap back a little bit. I’m from Philly, so I kind of like that. ‘Hey Jack, you gotta do this,’ he’ll (bark) back at me. That’s kind of like, OK, now we’ve got a relationship.”

But despite the promise of all the young talent along the Buckeyes’ defensive line, let’s not cast aside the importance of Ohio State’s veteran leadership and productivity just yet. The best still may be yet to come from players like Harrison and Taron Vincent, who also entered the program with five-star recruiting credentials, and it’s that mix of experience from the older players and potential from the up-and-comers that has Day excited.

And not just about the defensive line, but about the possibilities of the new-look Buckeye defense as a whole.

“There’s two things here. One, there’s a bunch of guys that have played a lot of football. You just take two guys that you just explained (Tuimoloau and Sawyer), and then you also have Tyler Friday coming back, you have Zach Harrison, you have Javontae’s played,” Day said. “On the inside you have Taron (Vincent) and Jerron (Cage) have both played, Tyleik (Williams) – Mike (Hall) hasn’t played as much – but certainly Ty Hamilton has had a very good camp. These guys have played a lot of football.

“The second thing I think is just that combined with the new scheme and some of the stuff we’re doing on defense, it comes at you fast and it’s exciting to watch. It’s exciting to see these guys have energy, be decisive, be physical. So I think when you combine the two of those things, it’s exciting a little bit right now. And going against them every day, offense and defense, it’s been a good back and forth. It’s been fun.”