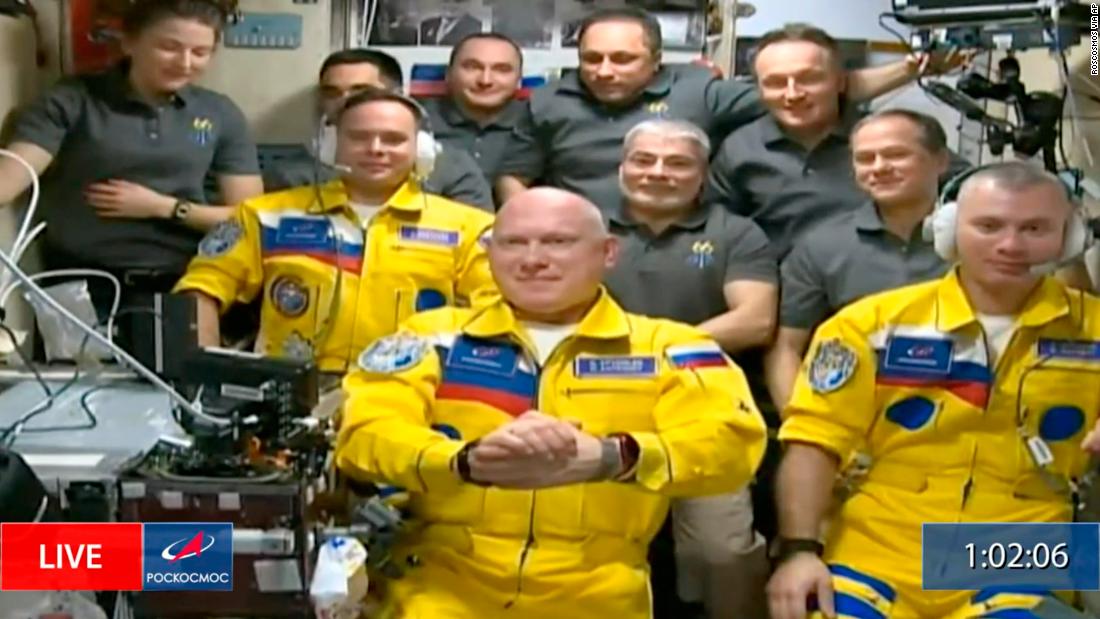 Vande Hei said cosmonauts Oleg Artemyev, Denis Matveev and Sergey Korsakov were caught off guard by the controversy over their spacesuits.

“All three of them happened to be associated with the same university, and I think they were kind of blindsided by it,” he said at a press conference.

Vande Hei said he didn’t shy away from discussing the war with his ISS crewmates.

“They weren’t very long discussions, but I did ask them how they were feeling and sometimes asked pointed questions, but our focus was on our mission together.”

Vande Hei landed in Kazakhstan in a Russian Soyuz MS-19 spacecraft on March 30 after a record-breaking 355 days spent in space. He traveled back from the space station with cosmonauts Anton Shkaplerov and Pyotr Dubrov.

His return from the ISS was highly anticipated and drew unprecedented attention because of mounting geopolitical tensions fueled by Russian space agency chief Dmitry Rogozin, who made several fiery social media posts directed at the United States.

This included Rogozin retweeting a partially animated video that appeared to threaten that Russian astronauts would abandon Vande Hei in space. Rogozin also engaged in a Twitter spat with retired NASA astronaut Scott Kelly, who held the record for the longest stint in space by a US astronaut until Vande Hei surpassed him.

Vande Hei said he heard about the tweets from his wife. “I never perceived those tweets as anything to take seriously,” he said, adding he saw the tweets as aimed at a “different audience” other than him.

“I just didn’t spend a lot of emotional energy paying attention to it. I heard about it. I kind of laughed it off and moved on,” he said.

On Saturday, Rogozin suggested in a series of tweets that Russia might end cooperation with the ISS due to international sanctions on Moscow and said Russia would prepare “concrete proposals to our country’s leadership” on the possibility of ending cooperation at the ISS with the space agencies of the US, Canada, the European Union and Japan.

NASA said, “the professional relationship between our international partners, astronauts and cosmonauts continues for the safety and mission of all on board the ISS.”

Other parts of Russia’s space program have been affected by the war in Ukraine. The country’s Mars rover project with the European Space Agency is on hold.

Vande Hei declined to reveal how the Russians on board felt about the invasion of Ukraine. “Those are things that I would prefer that they get to share directly rather than sharing me how they feel about it,” he said.

He said the invasion itself was “heartbreaking, very sad” and he felt “powerless” learning about it while living in space. Vande Hei said it didn’t change his feelings about his Russian crewmates.

“They were, are, and will continue to be very dear friends of mine. We supported each other throughout everything. And I never had any concerns about my ability to continue to work with them.”

Upon landing after his record-breaking mission, Vande Hei said he was able to walk after about eight hours, though he said he was wobbly.

He said he was also happy to eat some guacamole for the first time in a year and was shocked at how normal it felt to be back on Earth after so long in space.

“It’s a little disappointing how normal it feels.”

CNN’s Rachel Crane and Ross Levitt contributed to this report.