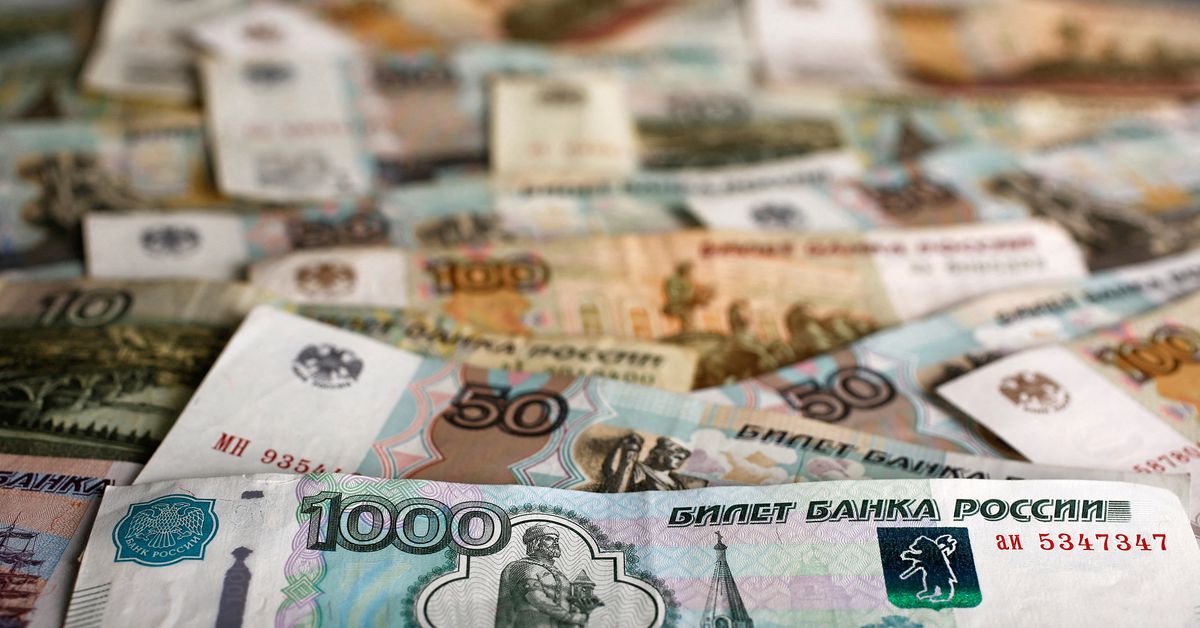 LONDON, April 6 (Reuters) – Russia edged closer to a potential default on its international debt on Wednesday as it paid dollar bondholders in rubles and said it would continue to do so as long as its foreign exchange reserves are blocked by sanctions.

The United States on Monday stopped Russia from paying holders of its sovereign debt more than $600 million from reserves held at US banks, saying Moscow had to choose between draining its dollar reserves and default. read more

Russia has not defaulted on its external debt since reneging on payments due after the 1917 Bolshevik Revolution.

“This speeds up the timeline around when Russia runs out of space on willingness and ability to pay,” one fund manager holding one of the bonds due for payment on Monday said.

The Kremlin said it would continue to pay its due.

“Russia has all necessary resources to service its debts… If this blockade continues and payments aimed for servicing debts are blocked, it (future payment) could be made in roubles,” Kremlin spokesman Dmitry Peskov said.

With a total of 15 international bonds with a face value of around $40 billion outstanding, Moscow has managed to make a number of foreign exchange coupon payments on its Eurobonds before the United States stopped such transactions. read more

Russia’s finance ministry said on Wednesday it had to pay rubles to holders of its dollar-denominated Eurobonds maturing in 2022 and 2042 as a foreign bank had refused to process an order to pay $649 million to holders of its sovereign debt.

The finance ministry said the foreign bank, which it did not name, rejected Russia’s order to pay coupons on the two bonds and also did not process payment of a Eurobond maturing in 2022.

Russia’s ability to fulfill its debt obligations is in focus after sweeping sanctions in response to what Moscow calls “a special military operation” in Ukraine have frozen nearly half of its reserves and limited access to global payment systems.

JP Morgan, which had been processing payments on Russian sovereign bonds as a correspond bank, was stopped by the US Treasury from doing for the two payments due on Monday, a source familiar with the situation said. read more

Russia may consider allowing foreign holders of its 2022 and 2042 Eurobonds to convert ruble payments into foreign currencies once access to its forex accounts is restored, the finance ministry said.

Until then, a ruble equivalent of Eurobond payments aimed at bondholders from so-called unfriendly nations will be kept in special ‘C’ type accounts at Russia’s National Settlement Depository, the ministry added.

Russia has a 30-day grace period to make the dollar payment, but if the cash does not show up in bondholders account within that time frame it would constitute a default, global rating agencies have said.

Russia dismissed this as being a default situation.

“In theory, a default situation could be created but this would be a purely artificial situation,” Peskov said. “There are no grounds for a real default.”

Bondholders had been tracking bond payments since sweeping sanctions and counter measures from Moscow which have severed Russia from the global financial system.

Russia on Wednesday paid coupons on four OFZ treasury ruble bonds. These were once popular for their high yields among foreign investors, who are now blocked from receiving payments as a result of sanctions and Russian retaliation.