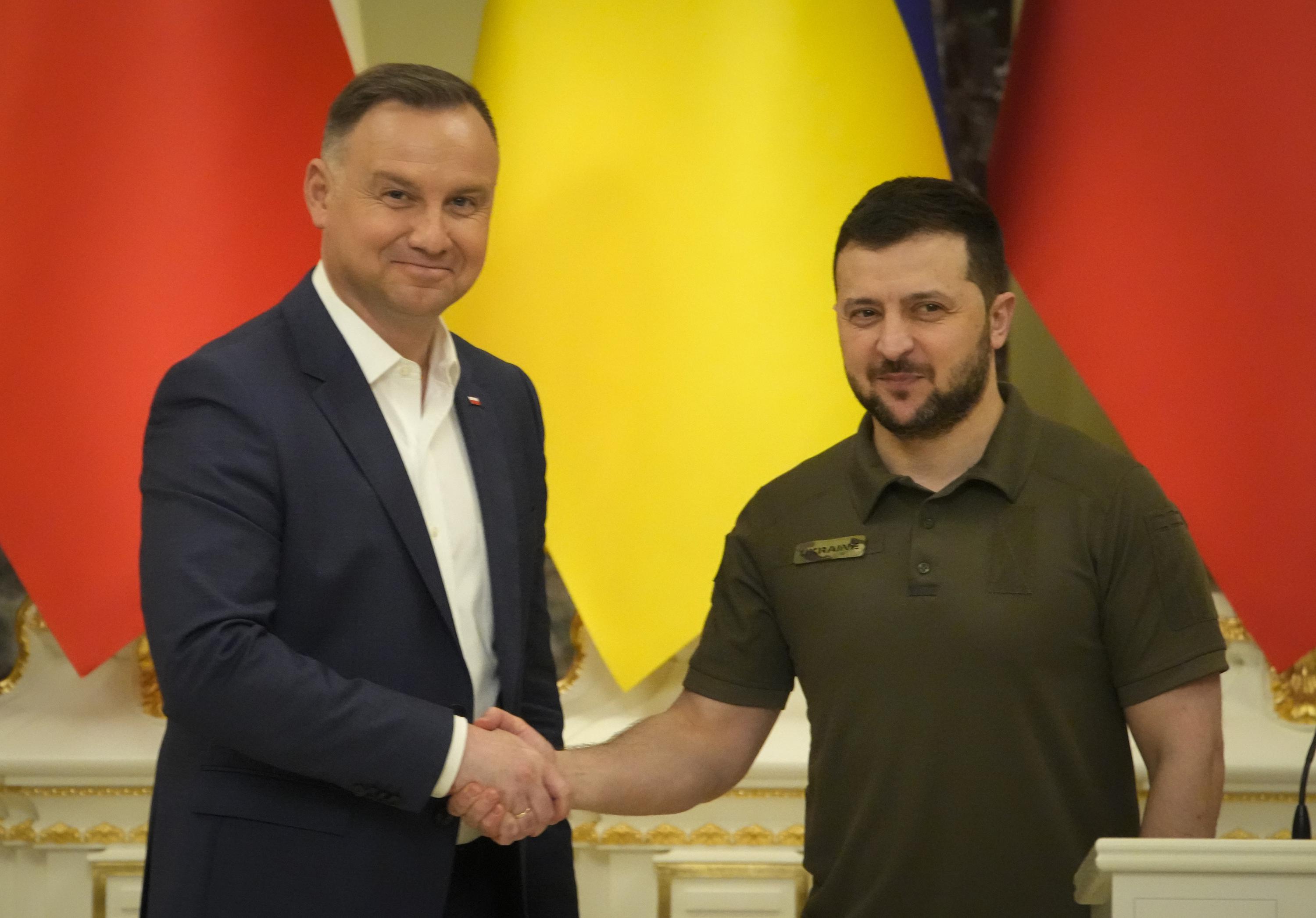 KYIV, Ukraine (AP) — Russia pressed its offensive in eastern Ukraine on Sunday as Poland’s president traveled to Kyiv to support the country’s European Union aspirations, becoming the first foreign leader to address the Ukrainian parliament since the start of the war.

Lawmakers stood to applaud President Andrzej Duda, who thanked them for the honor of speaking where “the heart of a free, independent and democratic Ukraine beats.” Duda received more applause when he said that to end the conflict, Ukraine did not need to submit to conditions given by Russian President Vladimir Putin.

Duda’s visit, his second to Kyiv since April, came as Russian and Ukrainian forces battled along a 551-kilometer (342-mile) wedge of the country’s eastern industrial heartland.

After declaring full control of a sprawling seaside steel plant that was the last defensive holdout in the port city of Mariupol, Russia launched artillery and missile attacks in the region, known as the Donbas, seeking to expand the territory that Moscow-backed separatists have held since 2014.

To bolster its defences, Ukraine’s parliament voted Sunday to extend martial law and the mobilization of armed forces for a third time, until Aug. 23.

Ukrainian President Volodymyr Zelenskyy has stressed that the 27-member EU should expedite his country’s request to join the bloc as soon as possible due to the invasion. Ukraine’s potential candidacy is set to be discussed at a Brussels summit in late June.

France’s European Affairs minister Clement Beaune on Sunday told Radio J it would be a “long time” before Ukraine gains EU membership, estimating it could take up to two decades.

“We have to be honest,” he said. “If you say Ukraine is going to join the EU in six months, or a year or two, you’re lying.”

But Poland is ramping up efforts to win over other EU members who are more hesitant about accepting the war-ravaged country into the bloc. Zelenskyy said Duda’s visit represented a “historic union” between Ukraine, which declared independence from the Soviet Union in 1991, and Poland, which ended communist rule two years earlier.

Poland has welcomed millions of Ukrainian refugees and become a gateway for Western humanitarian aid and weapons going into Ukraine. It is also a transit point into Ukraine for some foreign fighters, including from Belarus, who have volunteered to fight the Russian forces.

“Despite the great destruction, despite the terrible crime and great suffering that the Ukrainian people suffered every day, the Russian invaders did not break you. They failed at it. And I believe deeply that they will never succeed,” Duda told the Verkhovna Rada, Ukraine’s legislature.

Duda also credited the US and President Joe Biden for unifying the West in supporting Ukraine and imposing sanctions against Moscow.

“Kyiv is the place from which one clearly sees that we need more America in Europe, both in the military and in this economic dimension,” said Duda, a right-wing populist leader who clearly preferred to form President Donald Trump over Biden during the 2020 election.

On the battlefield, Russia appeared to have made slow grinding moves forward in the Donbas in recent days. It intensified efforts to capture Sievierodonetsk, the main city under Ukrainian control in Luhansk province, which together with Donetsk province makes up the Donbas. The Ukrainian military said Sunday that Russian forces had mounted an unsuccessful attack on Oleksandrivka, a village outside of Sievierodonetsk.

Luhansk Gov. Serhii Haidai said the sole working hospital in the city has only three doctors and enough supplies for 10 days.

In a general staff morning report, Russia also said it was preparing to resume its offensive toward Slovyansk, a city in Donetsk province that is critical to Russia’s objective of capturing all of eastern Ukraine and saw fierce fighting last month after Moscow’s troops backed away from Kyiv .

In Enerhodar, a Russian-held city 281 kilometers (174 miles) northwest of Mariupol, an explosion Sunday injured the Moscow-appointed mayor at his residence, Ukrainian and Russian news agencies reported. Ukraine’s Unian news agency said a bomb planted by “local partisans” wounded 48-year-old Andrei Shevchuk, whose home is near the Zaporizhzhia Nuclear Power Plant, which is Europe’s largest and employs many Enerhodar residents.

With Russia claiming to have taken prisoner nearly 2,500 Ukrainian fighters from the Mariupol steel plant, concerns grew about their fate and the future facing the remaining residents of the city, now in ruins with more than 20,000 feared dead.

Relatives of the fighters have pleaded for them to be given rights as prisoners of war and eventually returned to Ukraine. Deputy Prime Minister Iryna Vereshchuk said Saturday that Ukraine “will fight for the return” of every one of them.

The complete seizure of the Azovstal steel plant, a symbol of Ukrainian tenacity. gave Putin a badly wanted victory in the war he began nearly three months ago, on Feb. 24.

Denis Pushilin, the pro-Kremlin head of the self-proclaimed Donetsk People’s Republic, vowed that the Ukrainian fighters from the plant would face tribunals. He said foreign nationals were among them, although he didn’t provide details.

Ukraine’s government has not commented on Russia’s claim of capturing Azovstal. Ukraine’s military had told the fighters their mission was complete and they could come out. It described their extraction as an evacuation, not a mass surrender.

Mariupol Mayor Vadim Boychenko warned that the city faced a health and sanitation “catastrophe” from mass burials in shallow pits as well as the breakdown of sewage systems. An estimated 100,000 of the 450,000 people who lived in Mariupol before the war remain.

With Russia controlling the city, Ukrainian authorities will likely face delays in documenting any alleged Russian atrocities there, including the bombings of a maternity hospital and a theater where hundreds of civilians had taken cover.

Meanwhile, a Ukrainian court was expected to reach a verdict Monday for a Russian soldier who was the first to go on trial for an alleged war crime. The 21-year-old sergeant, who has admitted to shooting a Ukrainian man in the head in a village in the northeastern Sumy region Feb. 28, could get life in prison if convicted.

Ukrainian Prosecutor General Iryna Venediktova has said her office was prosecuting war crimes cases against 41 Russian soldiers for offenses that included bombing civilian infrastructure, killing civilians, rape and looting. Her office has said it was looking into more than 10,700 potential war crimes involving more than 600 suspects, including Russian soldiers and government officials.

Becatoros reported from Donetsk. Associated Press journalists Yuras Karmanau in Lviv, Andrea Rosa in Kharkiv and other AP staffers around the world contributed.

Follow AP’s coverage of the war in Ukraine: https://apnews.com/hub/russia-ukraine