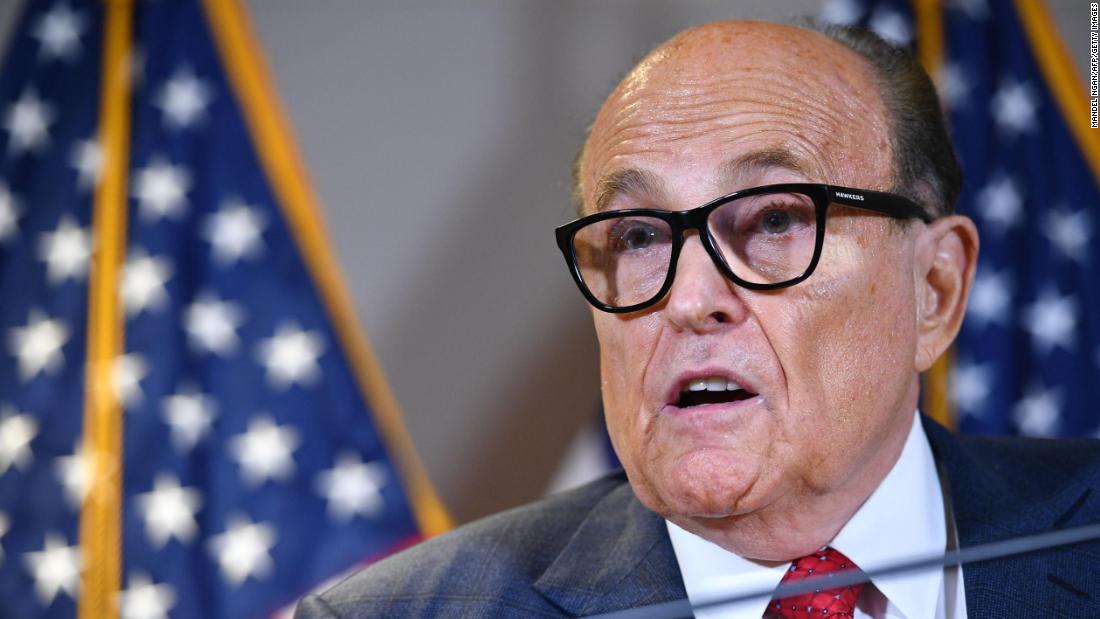 The indication that he is a target of Fulton County District Attorney Fani Willis’ probe marked an escalation of the investigation and raises questions about Trump’s criminal exposure in the probe. Willis’ office has also informed 16 Trump-supporting operatives who were fraudulently presented as presidential electors in 2020 that they are targets of her investigation, but the focus on Giuliani brings the investigation into Trump’s inner circle.

Bob Costello, an attorney for Giuliani, confirmed to CNN earlier this week that Giuliani will appear Wednesday before the special grand jury convened for the investigation, but Costello indicated that the former New York mayor would not necessarily be responsive to the questions he was asked.

Costello declined to say whether Giuliani would invoke his Fifth Amendment right against self-incrimination, but suggested that Giuliani would not answer questions about his communications with Trump.

“If you think he’s going to talk to you about conversations he had with his client, you’re delusional,” Costello said. Everything, he says, “depends on the questions they ask.”

Other witnesses who have appeared before the grand jury have been asked to testify to Giuliani’s participation in 2020 hearings and meetings with Georgia lawmakers, where Giuliani pushed bogus claims about election fraud.

Among the potential crimes Willis is investigating is making false statements to state and local government bodies, as well as solicitation of election fraud, and conspiracy.

Of interest to the Atlanta investigators are hearings before Georgia lawmakers where Giuliani and other Trump allies promoted conspiracy theories about supposed 2020 election-rigging. At a December, 3, 2020, Georgia Senate subcommittee hearing, Giuliani played heavily edited video of Fulton County election workers, and he urged the legislators to appoint a slate of pro-Trump electors in disregard of the statewide results showing that Joe Biden had won . He also appeared virtually before a Georgia House committee to discuss alleged election irregularities on December 10, 2020.

Giuliani and other Trump allies appeared at another hearing before Georgia lawmakers on December 30, 2020, where he reiterated the false claims that the state’s election had been plagued by fraud.

His allegations have been debunked numerous state and federal officials. Among those pushing back have been Trump-appointed officials, including former Atlanta US Attorney Byung “Bjay” Pak, who confirmed to the US House January 6, 2021, investigation that the claims of election fraud put forward by Giuliani and others had been investigated by federal authorities and found to be not true.

Democratic lawmakers who have tested before the Fulton County grand jury were asked to recount their experience attending those hearings, with investigators signaling a focus on the unusual fashion in which the hearings had come together, lawmakers’ impressions of the information that was being shared and the suggestion that lawmakers pursue an alternate slate of electors.

Giuliani has decried Willis’ probe as “a political stunt” and a sign that “we’re starting to live in a fascist state.”

“As I correctly recall, I appeared in Georgia as attorney for Donald J. Trump, so I’m going to be prosecuted for what I did as an attorney,” he said on his podcast on Monday.

For months, the public activity of the Fulton County probe made it appear as the most significant legal risk for Trump and his inner circle for their gambits to reverse his 2020 defeat. Only recently has it become clear that the US Justice Department is investigating the 2020 election-related conduct of Trump allies as well, but the targets of that investigation are not known.

Giuliani will be appearing before the Fulton County grand jury Wednesday having been subpoenaed in July. With his failure to appear at a New York court hearing challenging the subpoena, he was ordered by the New York judge to testify. Other Giuliani attempts to push off the appearance — including with a claim that recent heart surgery prevented him from traveling — were unsuccessful.

Other attorneys who represented Trump during the 2020 election have also sought to challenge subpoenas for testimony before the Fulton County grand jury.