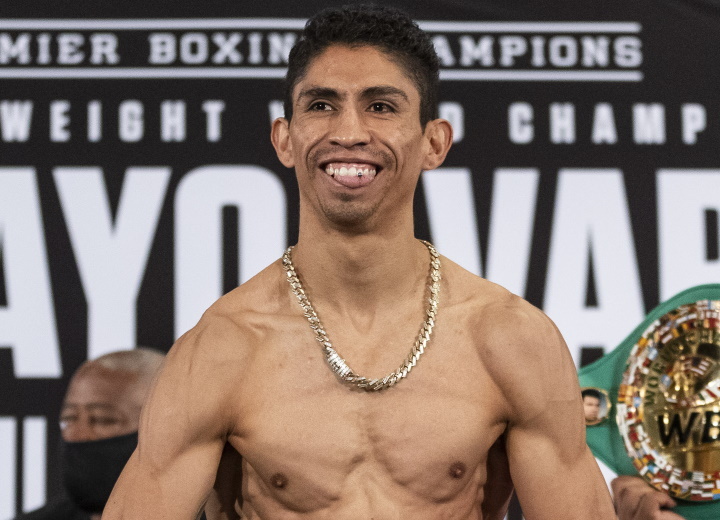 Rey Vargas defeated Magsayo by split decision in their “Showtime Championship Boxing” main event at Alamodome. Judges Tim Cheatham (115-112) and David Sutherland (115-112) both scored their back-and-forth fight for the unbeaten Vargas, who lost 114-113 on the scorecard of judge Jesse Reyes.

Magsayo knocked Vargas to the canvas with a right hand in the ninth round, but he couldn’t finish the resilient two-division champion. The taller, rangier Vargas’ length and distance troubled Magsayo at times, but Vargas engaged more than Magsayo and others might’ve anticipated.

Mexico’s Vargas (36-0, 22 KOs) became a world champion in a second weight class and dealt the Philippines’ Magsayo his first defeat as a professional (26-1, 14 KOs).

“It wasn’t complicated at all,” Vargas said during his post-fight press conference. “But we really felt comfortable throughout. And technically, we felt sound. We knew that we were doing things right round-by-round. So, the end result was what we expected.”

The former WBC 122-pound champion, who was the mandatory challenger for Magsayo’s championship, took the title Magsayo won when he upset Gary Russell Jr. in their 12-round title fight January 22 at Borgata Event Center in Atlantic City, New Jersey.

“No matter what, I’ll come back stronger,” said Magsayo, who is promoted by Manny Pacquiao’s company. “I’m disappointed, but I did my best.”

Based on how their fight was scored through 11 rounds, Magsayo needed a knockout in the 12th round to win.

A left hook by Magsayo made Vargas hold him with just over 1:30 left in the final round. Magsayo couldn’t land another damaging punch before their fight ended, however, because Vargas wisely kept his distance.

Vargas blasted Magsayo with a left hook that landed with just over 1:10 remaining in the 11th round. Magsayo wasn’t hurt, but it was Vargas’ most significant shot in several rounds.

After flooring Vargas with a right hand in the ninth round, Magsayo rocked him with another right hand a minute into the 10th round.

Vargas complained during the ninth round about Magsayo hitting him behind his head. A left hook by Magsayo caught Vargas with just under 1:15 on the clock in the ninth round.

A right hand by Magsayo sent Vargas to his gloves and a knee with 41 seconds to go in the ninth round. Vargas tried to hold on to Magsayo as he fell, but Vargas went down anyway.

“It wasn’t a power punch,” Vargas said of the punch that dropped him. “It wasn’t something that’s super hard. It was more of a bad moment and it was something that counted. He did get me, but we were able to move on and come back strong.”

Magsayo rocked Vargas with a right hand that made him stumble with 1:08 remaining in the eighth round.

Vargas also suffered a cut around his left eye during the sixth round.

Vargas backed up and made Magsayo miss with several shots in the opening minute of the fifth round. Magsayo’s right hand landed to the side of Vargas’ head and knocked him off balance with just under 20 seconds remaining in the fifth round.

Vargas’ straight right hand landed a little less than 50 seconds into the third round. A short, left hook by Vargas caught Magsayo with just over 30 seconds on the clock in the third round.

Vargas drilled Magsayo with another right hand just before the bell sounded to end the third round.

Vargas overhand right caught Magsayo with about 1:15 to go in the second round. A right hand by Magsayo caught Vargas as he moved backward a couple seconds before the second round ended.

Vargas turned away from Magsayo after taking what appeared to be a permissible body blow Vargas contended was low with just over a minute to go in the first round. Magsayo landed a right hand to the side of Vargas’ head a little less than 40 seconds into their fight.

Keith Idec is a senior writer/columnist for BoxingScene.com. He can be reached on Twitter @Idecboxing.